La rentrée is the French term for the first few weeks of September, and the return to normal life after a month of swimming costumes, sun and rosé. And the main event of la rentrée? Buying le manteau, bien sûr.

While we Brits may not have had a special word for the back-to-school sensation September brings, for a long time this month was also marked by our most important purchase of the year: our winter coats. Every autumn, one major stand-out trend was decided upon (military, camel, Victoriana, tartan, mini, maxi…) and we would rush out to department stores, high streets and designer boutiques to make sure we owned it by October. Remember the infamous M&S pink duster coat that half of Britain wore throughout winter 2013? Well, that.

But in the last few years, coat buying stopped being an annual early-autumn pilgrimage to the shops and started becoming something more considered. Some women now wait until the January sales to get a coat half-price, others play the field rather jump into a committed relationship before the leaves have fallen off the trees, and even more are recycling their coats for two or even three seasons.

“We’ve really noticed that the concept of getting a new coat every winter has been replaced by a demand for long-lasting pieces that will see you through several years – so we see customers purchasing coats at any point during the winter as opposed to preparing for the coming months in autumn,” explains Jeannie Lee, head of womenswear at Selfridges. “As is the case for fashion in general, there has been a noticeable shift in the way we shop for outerwear in recent years towards investment pieces that last for several seasons. Brands such as Moncler, Brunello Cucinelli, Theory, Maje and Max Mara are perfect for timeless designs, but more importantly exceptional quality and durable products.”

Avril Mair, the fashion director of Elle and Harper’s Bazaar, agrees, even down to the designer of choice. “Buying a coat is the biggest investment for most people so I don’t think trends should really come into it,” she says. “You need a coat that works for your daily lifestyle – and then, ideally, an evening coat which can be thrown over just about anything but makes a statement. Personally, I’m going to wear a Brunello Cucinelli cashmere coat which I’ve had for more seasons that I care to remember.”

She adds that her readers want to learn about well made, well-cut coats as and when they come out, rather than in one big batch each September. This is now possible because collections are released frequently – both for high street and designer brands – rather than clustered at the start of each season.

As we move towards shopping online we are also discovering global brands, some of which are based in the southern hemisphere where winter lasts from June to August. Equally, the popularity of pre-loved clothes is rising, making it impossible to time your ‘perfect purchase’.

“It used to be that you would have to buy a coat in September because that’s when they came into store, blink and you miss it, but nowadays you can find a great trench in just about every collection, no matter the season, while even spring/summer runways will feature a coat thrown over a dress,” says Mair. “I think the idea of seasonal trends are slowly dying – and it also feels wrong to imagine entirely ditching your wardrobe twice a year.”

While certain cuts and colours will always be more in fashion than others, this shift has led to the slow eclipse of the cult coat. Instead, the market has developed in two different directions, neither of which leave much space for the high street to produce one memorable design that half the nation lusts over.

“On one hand you have brands such as The Row, Acne or Burberry, who very much focus on craftsmanship and timeless appeal,” explains Lee. “On the other hand, there is a growing demand for very trend-driven outerwear by the likes of Fenty, Shoreditch Ski Club or Khrisjoy, which customers view as collectible pieces.”

And as with so many shifts in the industry, the pandemic is also forcing change that might otherwise have taken years to come about. Traditionally coats have been the one purchase people were hesitant to make online, largely because of the cost involved. But as changing rooms remain closed, customers are adapting: either waiting until they feel safe to leave the house to shop, or going online and looking beyond their local high street to buy their outerwear.

In such a strange disjointed year – one without big weddings and holidays abroad – one simple reason why we are reluctant to make our big winter purchase is that we are not quite ready to let go of summer and are wary of the months ahead.

“Are we even going to be leaving the house? Going to the office? Dressing up for parties?” asks Mair. “I think this year we’ll see the coat more as a comfort blanket…” It might not be the rentrée Parisians had in mind, but it is very 2020.

Tue Sep 8 , 2020
Mohamed Fathi, an Egyptian man who has recovered from Covid-19, winced as he watched tubes running down his arm to donate blood plasma, but insisted: “if I can help just one person, that’s a very good thing”. The 25-year-old land surveyor from Cairo caught the disease in May, on the […] 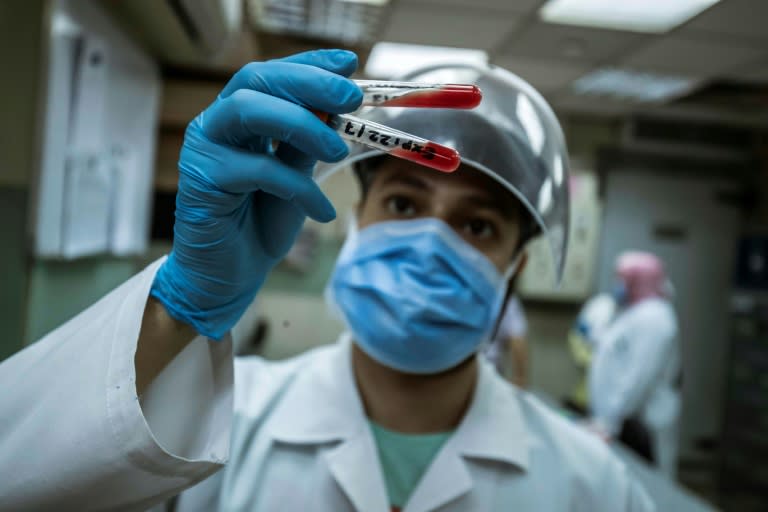