Supply chain woes and the Delta variant have captured headlines causing some fears that the holiday season could be torched again for retailers. However, Fool contributors Jeremy Bowman, Brian Withers, and Toby Bordelon think otherwise. In this segment of “The Five,” recorded on Sept. 3, they point to a number of tailwinds […]

Supply chain woes and the Delta variant have captured headlines causing some fears that the holiday season could be torched again for retailers.

However, Fool contributors Jeremy Bowman, Brian Withers, and Toby Bordelon think otherwise. In this segment of “The Five,” recorded on Sept. 3, they point to a number of tailwinds — including increased personal income and the desire to make up for a holiday season that many couldn’t fully celebrate last year.

Brian Withers: But I’m worried about the holiday season. Retailers have taken it on the chin and they need a boost, they desperately need a boost. There are so many headwinds today, for retailers between supply chain issues, the Delta variant and on top of it, labor shortages, they just can’t catch a break. Question. Jeremy’s up first, will there be holiday cheer or disappointment for brick-and-mortar retailers, stores this quarter or this season and let’s compare to 2019. Is it going to be better or worse this year?

Jeremy Bowman: I’m going to be an optimist and say, it’s going to be better just because I’ve been surprised at how quickly retail spending has bounced back broadly, even in something like apparel that had been hard hit during the pandemic. You look at some of these, like sporting good retail stocks , you want to talk about a sector that has just been a real surprise during the pandemic. Dick’s and I think Big 5 Sporting Goods, they’ve crushed it. American consumers have money. Stimulus checks were pretty generous, and there’s been unemployment payments going out. What’s also been surprising is that savings went up over the last year, year-and-a-half. I think people have money they’re going to want to spend it on holiday gifts and all that. Especially, I think if you really didn’t travel last year, they’re trying to make up for maybe Christmas that you missed or something like that. You’re probably going to maybe spend a little more on gifts and food, decorations, whatever you like to do. Yeah, I think for that reason overall will be good. I think there has been a shift in the balance of power in brick-and-mortar retailers. Department stores have struggled. Chains like Target (NYSE:TGT), that are able to offer e-commerce or do better with e-commerce are up. They’ve done really well. I think the off-price chains like TJ Maxx, the TJX Companies as the stock company is known, will do well. There’s a shift there, but I think overall, I’m optimistic for the sector for the holidays.

Withers: Yeah, Jeremy. That order online pickup in store. I’ve done that with Target, I’ve done it with a number of other companies. That could be a tailwind. Because last thing you want to do is fight traffic, park somewhere in the huge parking lot, wander around the store only not to find what you want and go home disappointed wasting all of your time. But, buy online pickup in store, order it at lunch on the way home, cruise by this Target, pop into the customer service desk, pick up your thing. Even my local Target here has stalls, you pull in and you call the phone number and they bring it out to you.

Bowman: I think if you live near a Target it’s a pretty cool service and you can get it in an hour or two. In some ways I think it beats Amazon (NASDAQ:AMZN). I think they’ve grabbed billions in market share from some of the department stores share I was talking about before so that’s been a big winner for them.

Withers: Absolutely. Toby, you seeing cheer in the future or the Grinch going to come disappoint everybody.

Toby Bordelon: I think it’s going to be fine. I think it’s going to be a good year. Like Jeremy, I’m very optimistic about this. I take a little bit of a different take on this though. I looked at brick-and-mortar versus online, I don’t think brick-and-mortar is going anywhere though. Amazon is rumored to be recently entering brick-and-mortar even more than they already are. With some store openings, they’re already in. They have bookstores, they have Whole Foods which they bought. But they opened up their own bookstores, they’re testing out those concept grocery stores. Now there are other ideas out there that we always hear rumors Amazon’s going to be opening another store for this. If Amazon is going brick-and-mortar, I don’t think you can possibly say that the space is going anywhere. I think online, I think it’s definitely the future and probably we can say online is the present at this point. Physical retail is not dead. I think the issue that we’ve seen here is that, it’s not an issue of having a physical store when shopping online. The issue is you need to offer a compelling unique shopping experience. I think retailers are just starting to figure that out. By now I think the ones that are still thriving are the ones that have figured out how to do physical retail in a way that distinguishes it from online, and makes it worth people’s while to come into the store and makes them want to come into the store. I think you’re going to see that more this holiday season, especially some of these local small businesses that are going to do well, that offer something different, something unique. Yeah. I think it’s going to be a good year.

This article represents the opinion of the writer, who may disagree with the “official” recommendation position of a Motley Fool premium advisory service. We’re motley! Questioning an investing thesis — even one of our own — helps us all think critically about investing and make decisions that help us become smarter, happier, and richer.

Halloween sales not so scary this year

Sun Oct 10 , 2021
Retail forecasters are calling for record Halloween sales this year as consumers try to leave covid-19 fears behind. But the pandemic’s effect on the supply chain means finding just the right costume or fright prop might be a challenge for some this year. The National Retail Federation’s annual survey projects […] 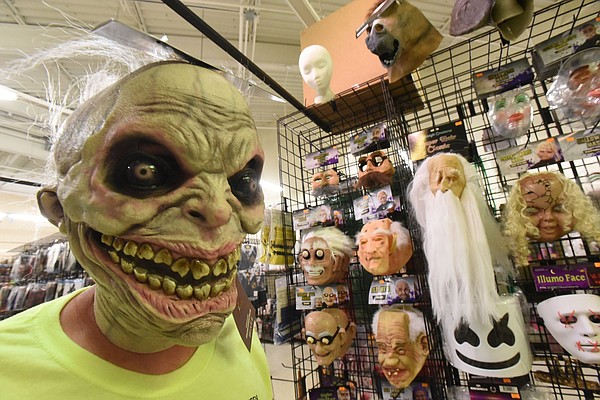