Now that , the conservative social network that’s currently the number one free app in the App Store, there’s yet another social network popular with Trump supporters that you may want to know about.

Here’s everything you need to know about the site competing with Parler for conservatives looking for a new online home.

MeWe is an alternative social networking site that’s currently experiencing a surge in new users as Trump supporters search for new platforms in order to avoid Facebook and Twitter. It bills itself as the “next-gen social network” and centers its sales pitch to new users around data privacy and providing an ad-free experience.

MeWe is owned by a company called , which was actually also the name of the platform early on. It was founded by internet entrepreneur Mark Weinstein. In an interview with last year, Weinstein called himself “one of the guys who invented social media.” While that’s giving himself a bit too much credit, Weinstein was in the space early on. In 1998, he created a very early social network type site called , which was shut down by its investors in 2001.

In 2011, Weinstein started a new online business venture which in the creation of MeWe.

Who is using MeWe?

Almost everyone is using MeWe! Let me explain…

There are accounts for a number of major news outlets and personalities on MeWe. For example, here’s President Donald Trump’s account.

However, it’s not really Trump’s account. Neither he nor his team set the account up. MeWe did. The account can be followed by MeWe’s real users. It displays a feed of Trump’s tweets on Twitter in real time.

There are unofficial MeWe accounts like this for the New York Times, the NFL, Fox News, HuffPost, and even the Onion.

On one hand, it’s good that any random user can’t set up an account on this social network and pretend to be these official outlets. On the other hand, it’s also beneficial to MeWe to fill up its site with content from platforms it’s trying to take on to make it seem like there’s more activity on the site than there really is.

When it comes to MeWe’s real users, it may sound a lot like Parler, but it is a bit different.

For one, MeWe wasn’t founded as a social network for conservatives. It just became one and welcomed them with open arms. The right-wing surge on the platform was first noticed in 2019 after Facebook started on vaccine misinformation. Many different types of conspiracy theorists, such as the anti-vaxxers, started joining the site, likely due to the strong anti-Facebook rhetoric pushed by the site.

Now, MeWe is experiencing a boom just like Parler as pro-Trump supporters boycott Facebook and Twitter over their anti-misinformation policies in the aftermath of Trump’s defeat in the election.

It should also be noted that unlike Parler, MeWe does have users who aren’t conservative. It’s not even all about politics like it is with Parler. There are MeWe groups for supporters of the Green Party, groups for dog and cat lovers, and arts and music groups, to name a few. However, the most active users on the site seem to be there to discuss conservative politics.

Users joining MeWe over the past few days are met with a message by its founder, Mark Weinstein, promoting the site’s rules.

“No Ads, No Targeting, No Political Bias, No Newsfeed Manipulation, and No BS!” reads Weinstein’s post.

But, again, just like Parler, MeWe is no “free speech” paradise. Obviously, there’s the usual ban on unlawful conduct and content. But, the social network’s also ban “obscene or pornographic content” as well as impersonating someone.

“If you’re just a regular person from around the world who has a political point of view and you’re abiding by our terms of service, that’s none of our business…[but] if you’re a conservative or a liberal and you’re spewing hate, you’re gonna be out,” Weinstein told last year.

Weinstein also told the magazine that there were no policies banning misinformation or fake news, which he categorizes as just “opinion.” There’s lots of content on MeWe, for example.

Yet, Weinstein also stressed that MeWe does not allow the promotion of groups on its platform, meaning users have to actually seek out the content. Ironically, this is with many types of groups spreading misinformation concerning topics like health. Mark Zuckerberg’s network allows the content to exist, but it does not promote it.

Unlike Parler, MeWe isn’t trying to replicate every other social media site. Weinstein’s intent seems pretty clear in the marketing of the site and in his interviews: MeWe wants to be the alternative to Facebook.

This probably explains why the site tries to replicate Facebook’s user interface. Users can give thumbs up, hearts, and smiley faces to posts. They can share posts to their various feeds. There are user profiles and separate pages, as well as a groups feature for people to congregate around a specific topic.

This is all set up very similar to how it is on Facebook, down to the messiness of the UI. However, MeWe’s design does make it feel like the whole platform was bought off one of those sites that sell turnkey website solutions so you too can be the next Mark Zuckerberg!

What’s the future of MeWe?

MeWe is currently the second most downloaded free social networking app on Apple’s App Store. (That’s because Parler, the number one overall free app, categorizes itself as a “News” app in the App Store.)

#MeWe is now the #1 most downloaded Social Networking app in the iOS store! 🥇 Thank you to all our awesome members! 🙏 We are taking on Facebook with social media done right. No Ads, No Targeting, No Newsfeed Manipulation, No BS! 👍❤️ pic.twitter.com/YKBziMFbhA

According to mobile analytics firm , MeWe received 218,000 new installs on Google Play and the App Store in the U.S. during the period between last week’s election and yesterday.

Last year, Weinstein said that MeWe had 5 million users. However, just like with Parler’s numbers, it pales in comparison to Facebook’s 2.7 billion users or even Twitter’s 330 million users.

MeWe faces many of the same challenges any startup social media companies faces today: keeping users engaged on the site when everyone they know is on the more popular platforms.

However difficult MeWe’s growth will be, it may be financially in a place to compete.

The platform $5.2 million in 2018, bringing its total funding to $10 million, with backing from celebrity investors such as fashion designer Rachel Roy and Lynda.com founder, Lynda Weinman. Sir Tim Berners-Lee, who is considered the father of the world wide web, even has an with MeWe.

In his interview with Rolling Stone last year, Weinstein explained where the name MeWe came from.

“My life is composed of ‘me’ and then my ‘we,’ which is everybody that’s part of my life,” he said. But, as MeWe’s platform fills with Trump supporters, MeWe’s success may rest on one man: President Trump.

Trump has yet to join any of these alternative social networks. However, he’s about to lose many of the he receives from platforms like Twitter that allow him to spread harmful misinformation without being banned, so he may have to soon join one.

MeWe may think it’s competing with Facebook, but the real competition appears to be with Parler, in a race to get Trump to join the one conservative social network to rule them all.

UPDATE: Nov. 11, 2020, 10 a.m. EST According to a spokesperson for MeWe, the platform now has 10 million users. One million of those users signed up for a MeWe account during the past 72 hours.

The company also says it has raised over $18 million dollars since its conception.

MeWe’s spokesperson said Mark Weinstein wrote a statement condemning the Rolling Stone article cited in this piece, and has threatened legal action against the magazine.

How to decide which one is right for you

Fri Nov 13 , 2020
The new Sony PlayStation 5, left, and the Xbox Series X. Curves vs. monolith. (Sony Interactive Entertainment/Microsoft) After an almost eight-year run, the PlayStation 4 and Xbox One eras are coming to an end. Taking their place with new releases from Microsoft and Sony this week are the Xbox Series […] 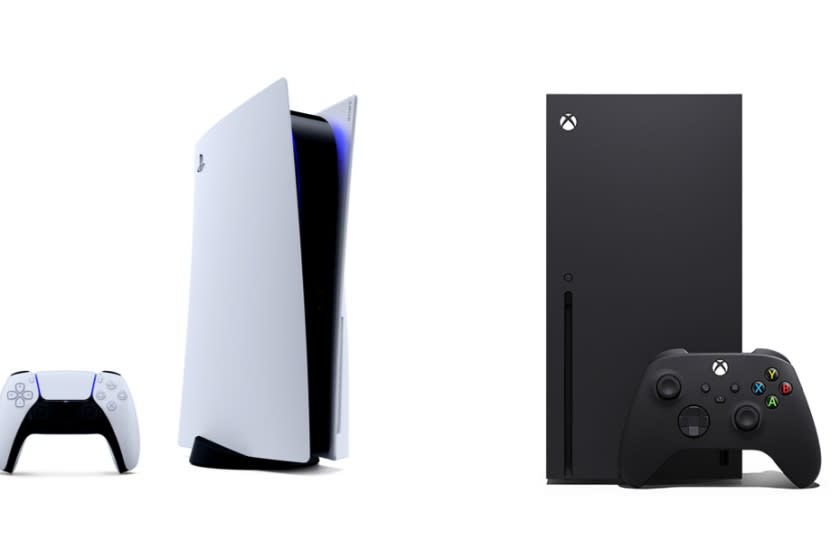