The recent marine emergency of the Zim Kingston cargo ship and its containers lost at sea has become another example of the continuing challenges facing the international supply chain. At this point, pick your problem: Weather challenges between here and Asia complicating routes and anchorages. Too much cargo arriving too […]

The recent marine emergency of the Zim Kingston cargo ship and its containers lost at sea has become another example of the continuing challenges facing the international supply chain.

At this point, pick your problem:

Weather challenges between here and Asia complicating routes and anchorages. Too much cargo arriving too fast at ports. A shortage of truck drivers to transport the cargo once its unloaded, or a lack of container chassis so the containers can be taken away by rail or truck. A lack of warehouse space to accept the trucked merchandise.

All of it adds up to iffy holidays at best for those hoping that supply-chain pressures would ease off.

Marine officials on Thursday offered many examples of the multiple challenges that currently face the area’s ports.

“We’re experiencing unprecedented pressure on several points in the supply chain — marine terminals, rail capacity, warehouse capacity and trucking shortage just to name a few,” said Port of Tacoma commission president Dick Marzano. “And needless to say the pandemic caused a short-term stoppage of manufacturing in Asia. They would start, they would stop, start and stop. Well, they’re moving now, but the rebound of manufacturing was met with huge demand of import goods …. and the supply chain has just not been able to keep up.”

“One of the things that’s very interesting to note is that we’re basically back to 2019 numbers, but we are backed up like this because this volume came in in such a quick period of time,” Felleman said.

“So overall, the number of containers being handled isn’t much different, but it’s this Christmas rush, shall we say, which may actually increase things even further. So that’s just kind of an interesting perspective on the inability of the supply chain.”

Felleman outlined steps taken by the NWSA, which represents both ports of Seattle and Tacoma, both of which have seen an overrun of containers.

“One of the direct things that we have is this spare container terminal space at Terminal 5 and at Terminal 46,” both at Port of Seattle, Felleman said. “Where you see us just staging empty boxes or fill boxes but not operating with cranes on and off the terminal, we’re trucking them to the sites.”

That move has freed up space at other terminals “to keep the volume going,” he said.

“We will have in January Terminal 5 operational, at least phase one, which will certainly be able to take on a lot more of the volume. But certainly this is a bigger, bigger thing than just one terminal can handle,” Felleman said.

As the weather gets dicier with high winds in the fall and winter months, Felleman said, NWSA has made Seattle’s Terminal 46 available for ships to get out of the weather and not add to the cluster of ships circling the Strait of Juan de Fuca.

For all the work the Northwest ports have done, as of Thursday, 77 ships were sitting off the ports of Los Angeles and Long Beach, California, according to Capt. Mike Moore of the Pacific Merchant Shipping Association, who participated in Thursday’s briefing.

Moore said they’ve “pushed the queue out” three to four weeks, so ships can choose to stay anchored in Asian ports or “slow-steam” to the United States to avoid waiting their turn sometimes up to two weeks offshore.

“The whole point was to take pressure off the anchorages, but to do so in a safe fashion. It’s always good when you can have more information to plan your voyage, and all this did was give them information three to four weeks out about their likely berth slot,” Moore said.

He noted that at one terminal this week there were 7,000 loaded import containers “waiting to be picked up, and we’re not seeing the trucks pick them up at a very fast pace. In fact, the utilization rate at the gates is about 35 percent less than what it should be.”

“That means the trucks are not showing up and picking up the cargo, and, if they don’t pick up the cargo, then the ships can’t come in and get worked at a good rate.”

“If you looked at gate cameras either here or down in L.A.-Long Beach at 9:30 in the morning, you would see a lot of empty gates,” he added.

“We’ve got to get at that congestion point and get the cargo moved off the terminals to allow the system on the water side to breathe.”

Repositioning has been a challenge, with the weather a factor limiting how many usable anchorages available along the coast.

“Anytime you do you change a situation outside the plan, you have some ramification so it’s not as easy as like, hey, take 20 of those vessels and move them somewhere else,” Moore said. “But some of that has been happening.”

Ultimately, he noted, “You’re just moving the problem around.”

On Friday, the count of lost containers from the Zim Kingston was up to 109, according to online news reports. The ship, heading to Vancouver B.C. from South Korea, lost the containers after hitting rough seas during last week’s “bomb cyclone” event and experiencing an on-board fire off the entrance to the Strait of Juan de Fuca.

The strait is where ships tend to head for calmer waters during severe weather events at sea, circling in the strait, which port officials refer to as the “race track.”

The containers included an array of items, including auto parts, furniture, toys, Christmas decorations, paddleboards, yoga mats and industrial wares, according to reports.

The containers that caught fire and two that went overboard contain potassium amyl xanthate, an organo-sulphur compound used in mining.

Some of the containers have shown up on remote parts of the northern tip of Vancouver Island. CBC reported Friday that the company that manages the ship has hired a specialized service for cleanup and to search for the containers.

Debbie Cockrell has been with The News Tribune since 2009. She reports on business and development, local and regional issues.

Haus of Luna ‘a trip to wonderland’ in Vancouver

Sun Oct 31 , 2021
“I put a lot of energy into it and I have so many good memories of working on the house,” Cejas said, adding that she rediscovered and renewed her artistic self in the process. Eventually Cejas enrolled in art and design classes at Clark. “Clark gave me the foundation,” she […] 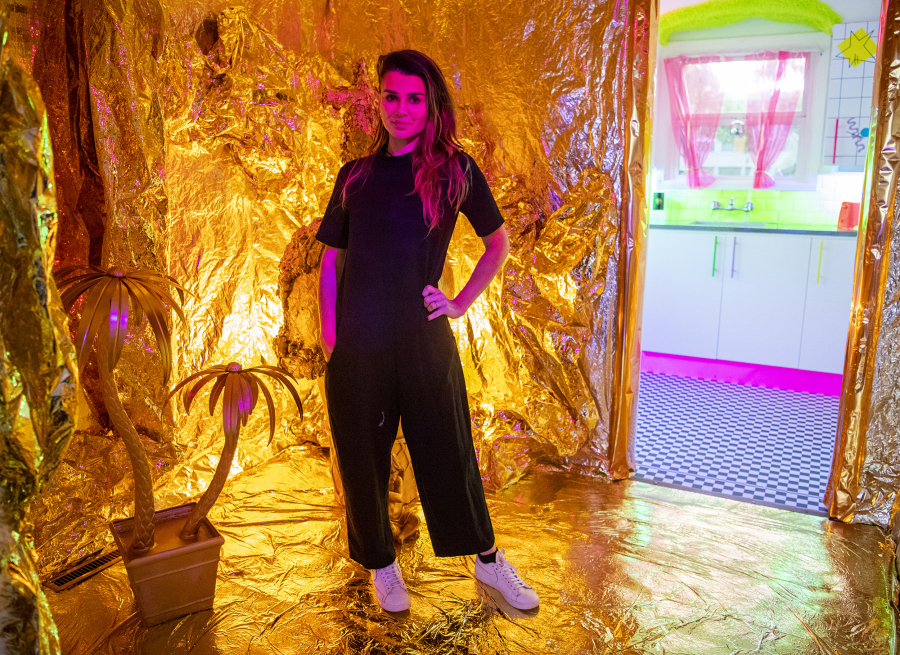