Click here to read the full article. Virgil Abloh said on Thursday he has raised $1 million for a scholarship fund for Black fashion students. The founder of luxury streetwear label Off-White and artistic director of men’s wear at Louis Vuitton has entered a long-term partnership with the Fashion Scholarship […]

Virgil Abloh said on Thursday he has raised $1 million for a scholarship fund for Black fashion students.

The founder of luxury streetwear label Off-White and artistic director of men’s wear at Louis Vuitton has entered a long-term partnership with the Fashion Scholarship Fund to launch the Virgil Abloh “Post Modern” Scholarship Fund, which is endowed with a personal donation from the designer and matching funds from his partners Evian, Farfetch, Louis Vuitton and New Guards Group.

The sum will provide scholarships to between 100 and 200 students of academic promise of Black, African American, or African descent.

”As a Black designer, I found my way through school, and a mixture of creative projects, and I had to make a name for myself. That took a lot of years and a lot of meetings and a lot of runway shows and a lot of work, and I wanted to make that door open for a younger generation to sort of have a pathway that stays open,” Abloh said in an interview on the sidelines of a cocktail at the Louis Vuitton family home in the Paris suburb of Asnières.

“I was a student on a campus that was largely not as diverse as the world is. And it’s important to set up this foundation specifically for Black students who may feel like in the industry of fashion, they don’t see many people that they can identify with,” he added.

Abloh said he named the fund “Post Modern” because recipients would also have access to career support services and mentoring. Friends like fellow designer Heron Preston have pledged to take part in master classes for young students.

“I wanted to showcase the future of ‘charity’ or giving back doesn’t have to be like the past,” Abloh explained.

“There’s all sorts of avenues that help erase systemic racism, but also how you can donate time, mentorship, access, Rolodex, advice — you know, being there for a younger generation,” he said. “I’ve always done lectures at schools, and I think that’s super important. You know, I’m not a designer that just hops away in a Mercedes and is gone.”

The fund essentially doubles the budget of the FSF, a nonprofit founded in 1937 that supports the careers of the country’s most promising fashion students in fields including design, merchandising, analytics, marketing, and supply chain, among others.

“At the heart of the FSF’s mission is elevating the voices and creative visions of talented youth from underrepresented backgrounds who are the future leaders of our industry. Virgil is a trailblazer and a game-changer, leveraging his considerable influence to effect change from within. We are grateful to have this opportunity to partner with him and his partners to impact the lives of so many deserving young people,” said Peter Arnold, executive director of FSF.

Abloh pointed out that he has consistently championed Black creative talents through his work, but was moved to amplify his voice by the recent Black Lives Matter protests.

The designer was criticized after he lamented the vandalism that took place during protests over police brutality against Black people, and was slammed online for donating $50 to a bail fund for protesters. Abloh subsequently clarified that he had actually donated $20,500 to bail funds and other causes related to the movement, which started after the police killing of George Floyd.

“I stand for these issues. The hot topic in our industry is the opportunities for Black people inside these institutions. So I have a position, I can turn the volume up on it,” Abloh added.

The Ford Bronco Through the Years

Fri Jul 10 , 2020
Consumer Reports has no financial relationship with advertisers on this site. Back in the mid-1960s, Ford needed another blockbuster hit following the success of the wildly popular Mustang. Ford’s research showed that many people were buying surplus World War II jeeps, but the company figured that buyers wanted more creature […] 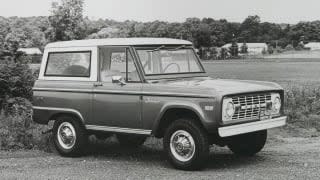