Note: Today’s column is the latest in the series “Surviving Shutdown,” examining the effect of COVID-19 on the Las Vegas entertainment industry.

He’s the Magic Man who can make your weeds disappear. She can work topless or work the topsoil.

Murray Sawchuck of Laugh Factory at the Tropicana and Dani Elizabeth of “Crazy Girls” at Planet Hollywood Resort have shown how to levitate (financially and spiritually) during COVID. They’ve performed Cirque-style acrobatics to remain fulfilled and solvent since their respective shows went dark in March on the Strip.

The couple’s most recent professional venture is Dirt 2 Dreams Landscaping. Sawchuck has applied the skills he’s developed sprucing up the yard in the couple’s Las Vegas home to a money-making operation.

Their most recent personal venture was to become engaged on Sept. 28. Sawchuck utilized a box of Cracker Jack to pull off the surprise prize. At the risk of turning Vegas headlining shows into a Harlequin Romance, they might not have their shows right now, but they have each other.

Their engagement was certainly befitting a romance novel. Sawchuck’s father had proposed to his mother by sneaking a ring into a box of Cracker Jack.

The magician explained to his girlfriend that he was stockpiling a favorite snack through a bulk, online delivery. He also ordered dozens of boxes of Hawkins Cheezies, the popular 70s-vintage Canadian snack, to help distract from the odd delivery of Cracker Jack.

The magic practice of deception, in other words. If Sawchuck had thought of Fiddle Faddle, he would have filled the cabinets with that snack, too.

Having set up the proposal prop, Sawchuck proceeded to snack on Cracker Jack for two weeks, to make these boxes seem more commonplace. He ate at least a box every couple of days. Then, the couple went on a staycation at Mount Charleston Lodge.

The two were on their patio, just before sunset, having glass of wine. Sawchuck of course offered Elizabeth a box of Cracker Jack.

Know that, these days, Cracker Jack offers a sticker to find a prize online, not an actual prize in the box. So, gone are the days when you would get a top, tattoo or pinball game in Cracker Jack. But Sawchuck had stuffed a ring inside the package that held the sticker, then glued it shut.

Elizabeth reached into the box, grabbed the glued-together packet and said, “There’s something in this one!”

She pulled out a 1.5-carat diamond ring.

“I thought this was the actual Cracker Jack prize, 100 percent,” Elizabeth says. “Then, Murr got on his knee, and I said, ‘Are you really proposing to me right now? Is this for real?’ It didn’t seem real to me that this was really happening.”

The couple are planning a spring or fall 2021 ceremony, hopefully when COVID has passed enough for a large, safe, Las Vegas party. Liberace Mansion is a favorite, and appropriate, locale.

Before they swap vows, Sawchuck and Elizabeth operate the rare landscaping business where the founder has appeared on “America’s Got Talent,” and the female emcees the longest-running adult revue in Las Vegas.

“Our thing is, whatever knowledge you have, you will use it eventually,” says Sawchuck, who is also the featured act in “Fantasy” at Luxor, another show waiting to restart in COVID. “The landscaping thing actually started five-six years ago, I actually recorded a pilot of me doing landscaping as a pilot to pitch to HGTV. Now, here we are, and it’s actually something we can still do together even during the pandemic.”

Elizabeth has no experience in the field, as it were. But she has a knack for the work.

“The only thing I don’t like is the hours,” the showgirl says, laughing. “If it was noon-8 p.m., I’m good, solid, with all of it. But it’s a great workout. Yesterday we did three houses. Three! So today, I’m not going to the gym.”

The couple has lured fellow entertainers as Doug “Lefty” Leferovich to the team. And Travis Cloer, whose talent seems forever boundless, has worked with Dust 2 Dreams, too (insiders say the former “Jersey Boys” cast member is especially adept at irrigation).

Sawchuck and Elizabeth are still unclear as to when they will return to the stage. “Crazy Girls” could conceivably return to Planet Hollywood by the end of the November, depending on its COVID-enforced theater design. Laugh Factory could be back the week before Thanksgiving.

“I’ve always said use whatever knowledge you have,” says Sawchuck, who has a degree from Columbia Academy of Broadcasting in Vancouver. “I use my degree to do my online work, hosting variety and charity shows, and being on TV.”

Sawchuck has been on “Pawn Stars” for 15 seasons, as the series’ magic-items expert. Elizabeth is also a professionally trained and licensed masseuse. She has up to five clients a week in that side gig, too.

“A lot of people are saying, ‘What if we don’t come back? What are we going go do?’ ” Sawchuck says. “We feel like, every day, we look at the world and say, ‘All right, how are we going to tackle this?’ And we start from there.”

All they need are the right tools.

How the wedding industry is struggling under strict coronavirus restrictions

Sun Oct 11 , 2020
(Getty Images/iStockphoto) By now, wedding season should be reaching a triumphant end, thousands of bouquets thrown and garters tossed, with vendors retreating with fatigue. This year, of course, it never really got started. Like most in the industry, Marianna Vaki, founder of London-based cake makers Whisk and Drizzle, began 2020 […] 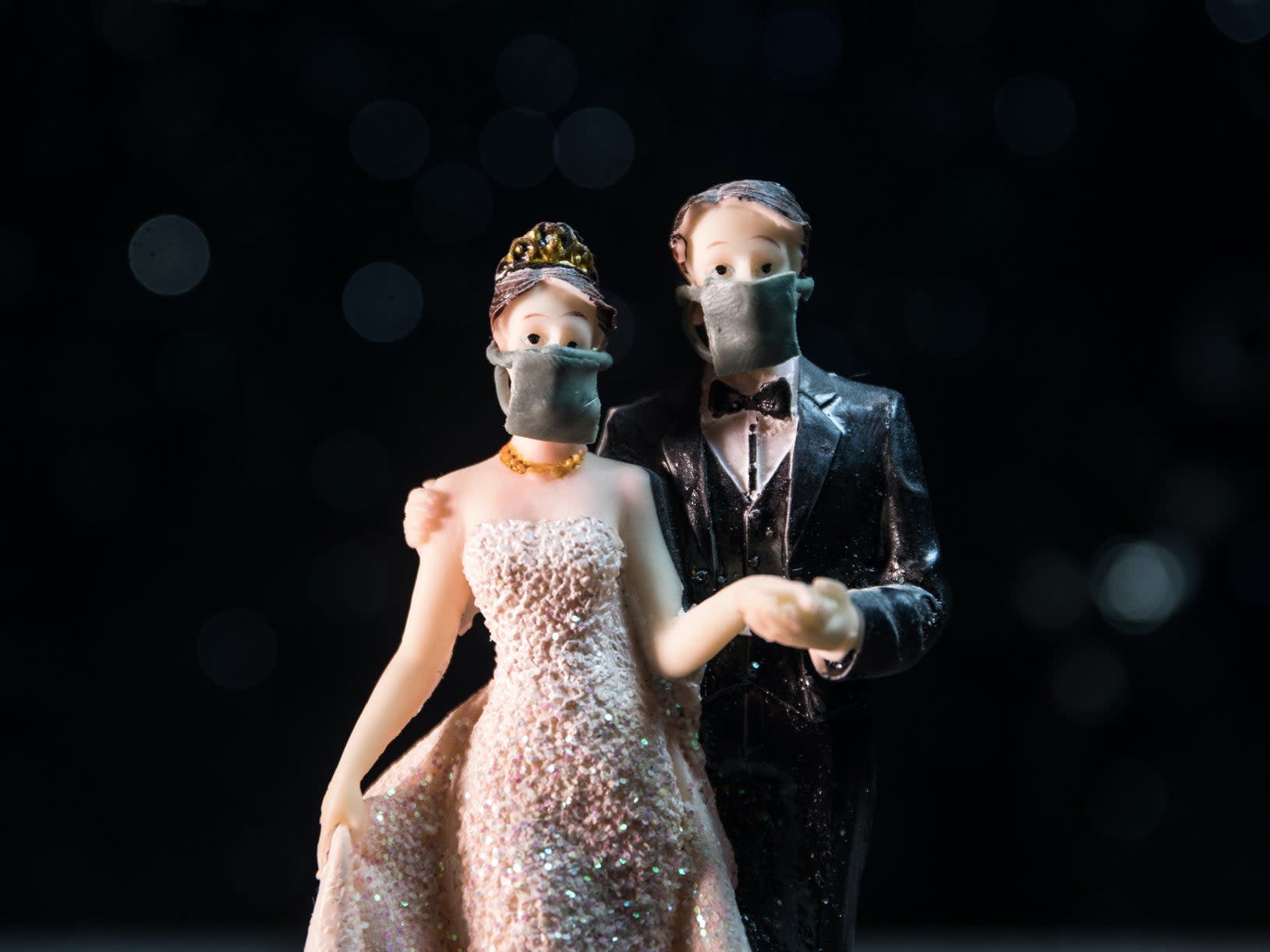