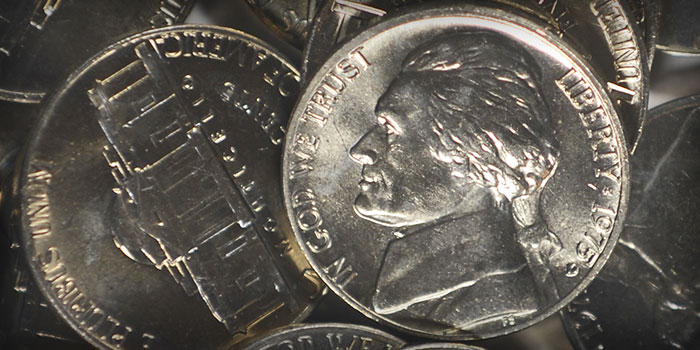 The Jefferson nickel debuted in 1938, replacing the Buffalo nickel in the 25th year of its production run. A design contest to commemorate Founding Father and third president of the United States Thomas Jefferson was held in 1937, open to “all American sculptors”. German émigré and American artist Felix Oscar Schlag was the winner. He received $1,000 for his effort.

Schlag’s concept for the obverse, which art scholar Cornelius Vermeule claimed was similar to Jean-Antoine Houdon’s 1789 bust of Jefferson, appeared essentially the same on the five-cent nickel for 66 years. His original reverse concept, however–featuring an innovative three-quarters perspective of Jefferson’s mansion Monticello–was rejected by the Treasury Department. Various changes were requested, the most significant of which was the flat, head-on portrayal of Monticello that is found on Jefferson nickels minted to this very day (though commemorative issues with different reverses have also been released). According to the rules of the 1937 design competition, Schlag received no additional compensation for this extra work.

The 1975 Jefferson nickel is the first year that the design was issued after the passing its designer, who died on March 9, 1974. The artist got to see his design circulate for the final 36 years of his life. It would go on to serve 30 more years before the United States Mint updated the design to reflect an aesthetic first employed by the Mint with the release of the Sacagawea dollar in 2000.

As for strike, many coin collectors are familiar with the notion of “Full Steps“. This refers to the sharpness and visibility of detail in regards to the steps in front of Monticello on the reverse. A grand total of six steps are rendered in the absolute best examples, while five full steps are still exceptional.

In this graphic, you see that the steps, located on the design between the stylobate, a flat pavement section on which rest the four front columns of the design, and the foundation block at the base of the steps. Factors such as die condition, striking pressure, and incidental contact with other coins play a significant factor in whether a Jefferson nickel will earn the Full Steps designation.

The 1975-D Jefferson is one of three-most-common 1970s Denver Mint nickels to come with Full Steps. In our analysis, the 1970-D is by far the rarest Full Step nickel of the 1970s, with the 1975-D being significantly easier to locate but still ranked amongst the most scarce D-Mit nickels of the decade with a full strike. Of the 10 issues released in the 1970s, the 1975-D is the third toughest, behind the 1970-D and the 1976-D, which is marginally harder to find than the 1975-D.

In MS66 FS, the value of the 1975-D nickel is approximately $200 USD, with recent auctions above and below that number. In MS65 FS, sales records vary dramatically – though a fair market value for a piece is about $30.

Without Full Steps, 1975-D nickels are common modern coins. Readily available in Mint Sets and rolls, collectors should be expected only to pay a nominal premium over face value. Without certification, which can cost as much as $30 a coin with all associated fees and handling taken into account, an uncirculated example will trade on online platforms like eBay for $2.00 plus postage. In a retail coin store, the cost might be less. A left-facing bust of President Thomas Jefferson, including a colonial-era pigtail and strikingly similar in detail to the profile of Jean-Antoine Houdon’s 1789 bust, takes up the majority of the obverse. The top of his head almost touches the rim, and the barest of truncations is visible at the bottom where Jefferson’s left shoulder meets the edge of the coin. The motto IN GOD WE TRUST–which became the national motto in 1956–arcs clockwise along most of the length of the left side of the coin, starting from Jefferson’s chest and extending to his hairline. The inscriptions LIBERTY and the date 1975 run clockwise along the right side behind Jefferson. A small five-pointed star divides the two inscriptions, and a small mint mark “D” is found between Jefferson and the date.

Interestingly, Felix Schlag’s initials did not appear on a Jefferson nickel until 1966, when they were placed below the truncation.

The reverse features a front view of Monticello, Jefferson’s mansion near Charlottesville, Virginia. The polymath Jefferson designed the neoclassical building himself, based on architectural principles from the Italian Renaissance; the name “Monticello” comes from the Italian for “mound” or “little mountain”. The building loses much of its dimensionality in the flattened rendering, but the octagonal nature of the dome can still be interpreted, and better strikes reveal significant detail in the steps and the portico.

Atop the reverse is the motto E PLURIBUS UNUM (“Out of Many, One”). The name MONTICELLO–the placement of which on the coin was one of the revisions forced upon Schlag by the Mint–is found in a straight line immediately under the building; the positions and spacing of the other inscriptions had to be adjusted to make room for it. The denomination FIVE CENTS forms a gently curving line beneath that, and the inscription UNITED STATES OF AMERICA runs counterclockwise along the bottom edge of the coin.

The edge of the 1975-D Jefferson Nickel is smooth.

Felix Schlag was born in Frankfurt, Germany in 1891. After receiving an education at the Munich University of Fine Arts, he moved to the United States in 1929. Schlag died in 1974. Yet while he did win numerous art contests and commissions throughout much of the remainder of his life, the Jefferson nickel was his only coin design.

Keep up with all the latest coin releases from the United States Mint by clicking on CoinWeek’s Modern U.S. Coin Profiles Page.

Why go through holiday hassle when you can have a Christmas tree delivered to your doorstep?

Wed Dec 2 , 2020
Sign up for our COVID-19 newsletter to stay up-to-date on the latest coronavirus news throughout New York City BY AUGOSTINA MALLOUS It’s a total hassle to transport a Christmas tree in New York City when you don’t have a car, let alone during a global pandemic. Luckily, we’ve rounded up […]