A voter fills out their ballot at Mitchel Community Center on November 3, 2020, in the Bronx borough of New York City.Photo: David Dee Delgado (Getty Images) Despite the president’s near-constant bellyaching about a supposed scourge of voter fraud and secret ballot dumps shaping this year’s election results, his own […]

Despite the president’s near-constant bellyaching about a supposed scourge of voter fraud and secret ballot dumps shaping this year’s election results, his own cybersecurity agency says there’s really no cause for concern.

Existing security measures at state and local election offices “make it highly difficult to commit fraud through counterfeit ballots,” the Cybersecurity and Infrastructure Security Agency said Friday in a post dispelling several election-related rumors. Many of which have been spread by President Donald Trump himself during his Twitter tantruming this week in the face of an increasingly likely defeat.

CISA clarified that neither it nor the Department of Homeland Security has any part in handling ballots or reviewing election results. That’s all taken care of at the state level. Local election officials design, print, and audit the ballots that voters use, and as such are also in charge of implementing ballot security measures to filter out voter fraud attempts. These measures include using signature matching, barcodes, precise paperweights, information checks, and watermarks, among others, CISA said.

No, when it comes to elections, these two federal agencies operate as facilitators, not arbitrators. CISA and DHS are responsible for helping state and local election officials safeguard their election infrastructure, such as by sharing intel on potential cyber threats and providing technical services like vulnerability scanning upon request. In short, you should disregard any claims you see circulating online that these agencies oversee voter fraud countermeasures.

G/O Media may get a commission

It’s an important distinction in light of Trump’s legal challenges over how several battleground states handle their election processes. On Wednesday, the Trump campaign filed lawsuits in Pennsylvania, Michigan, and Georgia after his early leads there began to crumble once officials started processing absentee and mail-in ballots. He’s also repeatedly threatened to drag the Supreme Court into this mess to settle the election as it did in 2000, presumably with the legal argument being “because I said so” since there’s little to no evidence to back up his voter fraud conspiracy theories.

CISA has previously dispelled several election rumors frequently touted by Trump and other prominent conservative figures. Such as that vote tallies on election night are the official final results (they aren’t), that shifting results after mail-in and absentee ballots are processed indicate election interference (they don’t), or the president’s recent claim that ballots that arrive after election day can’t be counted (they can and are, even in non-pandemic times).

But when have facts ever bothered Trump? Given his response so far, I have zero doubt that this election drama is far from over, and that any White House ouster will involve him kicking and screaming the entire way.

Sat Nov 7 , 2020
Let’s say your job requires you to be inside with others this winter in a poorly ventilated space. Maybe a windowless room in an aging school building, where the lack of fresh air raises the risk of spreading covid-19. Masks will help. Maybe you also want a portable air-cleaning device […] 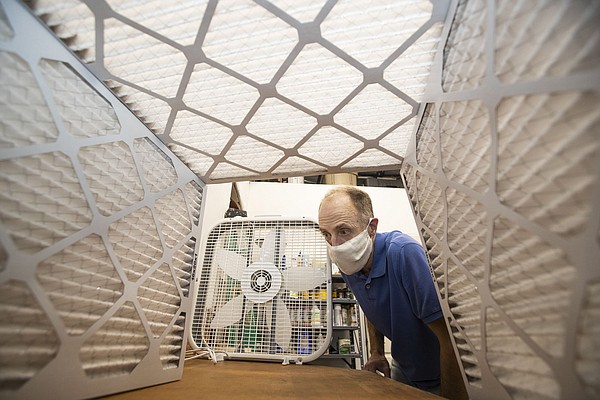