GREEN BAY, Wis. (WFRV) – It is the busiest time of year for Santa Claus as he gets ready to deliver toys to millions of children around the world, but he doesn’t spend all his time at the North Pole. He sets up shop at local malls and stores and […]

GREEN BAY, Wis. (WFRV) – It is the busiest time of year for Santa Claus as he gets ready to deliver toys to millions of children around the world, but he doesn’t spend all his time at the North Pole. He sets up shop at local malls and stores and is the star of quite a few parades.

We caught up with the jolly ol’ elf at Santa’s Wonderland in Cabela’s as he holds court for the little ones who want to give him their Christmas wish list in person.

Countless children have sat on Santa’s lap whispering their wish lists for Christmas. But not this year. There is no sitting on Santa’s lap due to the pandemic.

“We’re trying to create an environment that is as safe as possible and yet still celebrate the spirit of Christmas,” explained Santa.

Families are temperature screened, everyone wears masks and social distance, Santa’s room is sanitized between children, with ol’ Kris Kringle behind plexiglass and wearing a face shield, “But that doesn’t mean I won’t be listening and being very careful to grant every wish I possibly can,” Santa promises.

The extra precautions do not seem to take away from the magic of Christmas.

“Because the spirit is stronger then the plexiglass,” explained Santa.

And the little ones and mom agreed.

“It made me super happy to get me to see Santa even though there’s corona going on,” exclaimed Lilliana Sallenbach.

“I really love seeing Santa because its so cool,” Emmarie Sallenbach said excitedly.

“They’re thrilled, just the smile on their faces, they’ve been jumping up and down I don’t think they noticed too much that they didn’t get to sit on Santa’s lap. It was just the excitement of seeing him, something familiar,” said Chelsea Sallenbach, mom.

Kids can still tell Santa what they want to find under their tree on Christmas morning.

“I said that I wanted a Barbie house,” explained Lilliana Sallenbach.

Parents wanting to keep Christmas traditions alive during these times.

“It’s a tradition we do every year just because of everything going on I didn’t want to dull his little sparkle seeing Santa,” said Taylor Bird, mom.

“In times right now when everything is just so down in the dumps is nice to keep some regular traditions going,” said Kelly Phillips, mom.

Appleton’s ‘Hope for the Holidays’ decoration contest needs your home

The extra precautions put these parents at ease, “Everyone is wearing masks, we had our temperature checked, it was I think it was perfect, ” Chelsea Sallenbach, mom.

Santa believes keeping the Spirit of Christmas alive is important, especially now, “This might be the most important Christmas that we have to celebrate as family.”

So, are you on the naughty or nice list? If you’re on the wrong one, all you have to do is follow the rules to get on the nice list, “By simply being nice by being a good listener to mom and dad,” explained Santa.

All will leave with a precious picture and a cherished memory.

Although Santa will be in his wonderland until Christmas Eve, don’t worry, his reindeer and their magic fuel will get him around the world on that special night, “In one night how do I make it all the way around the world? Hohoho it’s easy mac & cheese it keeps them carbed up for the big run,” explained Santa.

Just in time to put children’s wishes under the tree on Christmas morning, “I will deliver the best presents I possibly can to each and every one of you,” Santa promised

Santa will be at Santa’s Wonderland at Cabela’s in Green Bay until Christmas Eve. The visit is free and you get a free 4 x 6 picture.

But you need to make an online reservation in advance. For more information or to set up an appointment click here

'Elves to the Rescue' make Arizona homes, businesses dazzle for the holidays

Sat Dec 5 , 2020
This Valley holiday decoration business is thriving despite the COVID-19 pandemic, making properties sparkle and shine. PHOENIX — In a year where we can all use a little extra holiday cheer, a team of elves is working around the clock to make magic right now. Heather Lundervold’s holiday decorating game […] 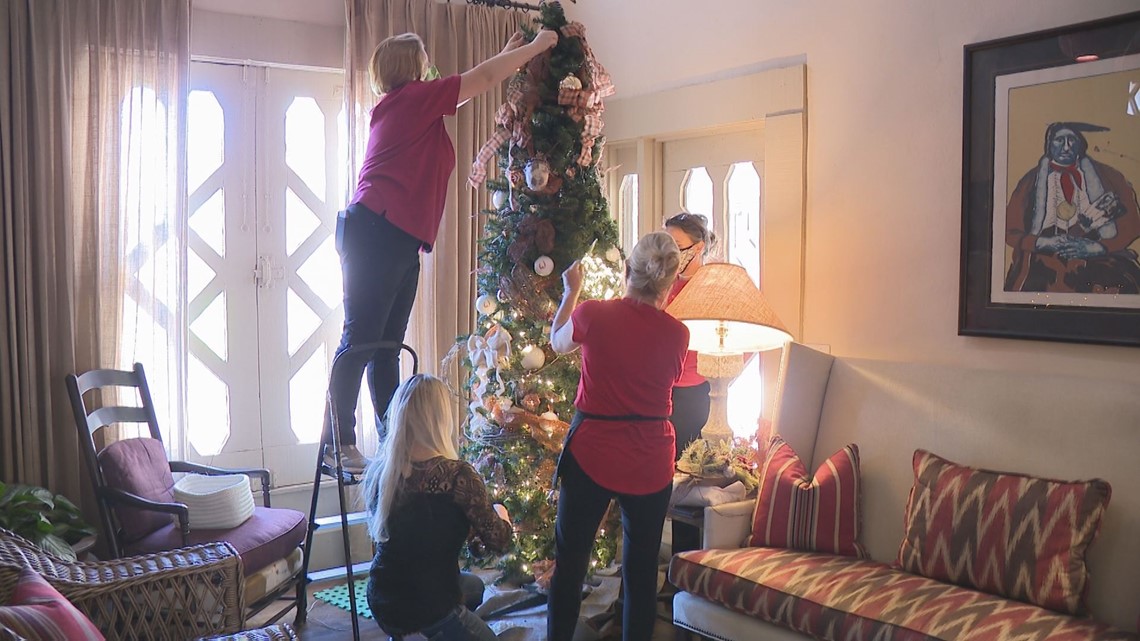