Nineteen years ago, J.R.R. Tolkien’s seminal fantasy story “The Lord of the Rings” debuted as an iconic movie franchise. Director Peter Jackson assembled an incredible team of actors and craftsmen to bring the highly detailed world of Middle Earth to life.

Each of the three movies was released in an extended-edition DVD format which included many hours of behind-the-scenes features. These mini-documentaries revealed prop design details, fun cameos, and production tricks that the average viewer wouldn’t have noticed on their own.

We’ve gone through the bonus material for the first film, “The Fellowship of the Ring,” to bring you all the best details and facts.

Keep reading to see 15 details you might have missed in “The Lord of the Rings: The Fellowship of the Ring.”

Ian McKellen based his vocal performance of Gandalf on the way J.R.R. Tolkien spoke in real life.

“Ian based his performance of Gandalf on Tolkien. He was impersonating Tolkien,” Peter Jackson said in one of the bonus features from “The Fellowship of the Ring.”

Jackson had given McKellen video and audiotapes of Tolkein speaking, which helped the actor inform his performance.

“I was looking at myself in the mirror as Gandalf, adjusting the stoop of my shoulders,” McKellen said. “And feeling the voice deepen, [and] getting raspier and little more precise than perhaps my own is.”

Pippin was part of the band playing at Bilbo’s birthday party.

“Something that a lot of people may not have noticed is I play in the hobbit band,” actor Billy Boyd said in one behind-the-scenes feature on the DVD set. “I’m up there with my hobbit ukulele or whatever that may be.”

You can see him in the background of the first wide-shot of Bilbo’s birthday party. Shortly afterward, he’s left the stage and is off making mischief with Merry.

The pipe Gandalf smokes is stored in his staff whenever he’s not using it.

Gandalf the Grey is frequently seen smoking from a long, slender pipe. When he’s not using it, the pipe is stashed in the staff he carries around. Once you know to look for it, you can see this ingenious design throughout “The Fellowship of the Ring,” most notably in the scene when Gandalf goes to Isengard to consult with Saruman.

If you want a detailed look at how the pipe fits into the staff, you can see the prop replica design at the Weta Workshop’s website here.

There were four primary methods used to make the hobbits appear smaller than humans in the movie. The first (and perhaps most obvious) were the body doubles, both tall and short.

“We did a worldwide search for people that were about 4 feet tall,” Peter Jackson said in “The Fellowship of the Ring” behind-the-scenes feature.

Kiran Shah was “the lord of the scale doubles,” as Elijah Wood called him. He stood in for Frodo in many scenes, like the shot above. A Thai woman named Fon was the double for Pippin, while Merry’s double was a 12-year-old boy, and an Indian man nicknamed B.K. was the stand-in for Samwise.

These doubles would mimic the other actor’s movements for wide-shots. Sometimes they wore prosthetic masks that were molded using the other actors’ faces.

But they didn’t just have shorter doubles.

There were also extra-tall doubles on set, like the 7-foot-tall man (nicknamed “Tall Paul”) who would double as Aragorn for scenes where the hobbit’s faces needed to be visible during scenes.

The second technique used was forced-perspective. In this scene, Elijah Wood and Ian McKellen were really sitting together in that cart — but Wood is several feet behind McKellen.

The forced-perspective technique involved an enormous amount of preproduction planning and special props. For the scene above, Elijah Wood was sitting on half of the cart that had been scaled up. He was stationed a couple of feet behind where Ian McKellen sat (with his half of the cart built to regular scale).

Then the camera was set at precisely the right angle to make it look like Frodo and Bilbo were sitting side-by-side as they talked.

This made things tricky for the actors since they couldn’t actually look at one another during these kinds of forced-perspective scenes. Instead, Elijah Wood was looking off to his side, while having to make it seem as if he was glancing up at Ian McKellen.

For more dynamic scenes between the hobbits and humans, something called a “big rig” was built. Stunt actors inside giant suits with animatronic hands would walk past the hobbit actors.

This technique was used especially in all of the scenes that take place in Bree, a village populated by humans that the four little hobbits visit.

In one shot (above) the four hobbit actors were standing on the set and looking up at a giant bar built to make them appear smaller. Then one of the “big rig” stunt people walks through the group. In the shot, you can see the animatronic hands move slightly, making it look like a real man is edging past tiny hobbits.

For a few scenes, like the one below, the smaller body doubles filmed the scene and then a CGI face-replacement was done in post-production.

In this scene, which takes place right after Gandalf’s “death” at the Bridge of Khazad-dûm, actor Sean Bean (who played Boromir) was holding body-double Kiran Shah.

The crew filmed Elijah Wood acting out the scene against a blue-screen, and then in post-production CGI’ed his face onto Shah’s body.

This scene, which shows the Fellowship together for the first time, was filmed on two separate blue-screens. John Rhys-Davis (Gimli) is the tallest actor of this bunch, but he fit perfectly to scale with the hobbits.

John Rhys-Davies is 6-foot-1, the tallest of the actors in the Fellowship. But because the hobbits are supposed to be around 4 feet tall, and dwarfs are about 4 to 5 feet tall, Rhys-Davies was in perfect proportion to the hobbit actors.

A gigantic version of the One Ring was used to create close-up shots like the one below.

In order to achieve reflective shots like this one, the props department created massive versions of the One Ring. This enabled them to film extreme close-ups while still keeping the detail.

You can see a photo of one of these giant prop rings on Reddit here.

John Howe (seen on the left in the above image) and Alan Lee (marked on the right) had cameos as two of the nine kings given rings of power by Sauron.

Lee created the illustrations for J.R.R. Tolkien’s 1992 editions of “The Lord of the Rings” books and was then hired alongside Howe as the lead concept artists for Peter Jackson’s movies. Lee also helped paint and craft some of the miniatures used in the movies, including the small-scale Rivendell set.

The Nazgûl’s horses have a metal sigil of Sauron’s eye hanging around their necks.

This neat costuming detail was spotted by a Redditor in the “Lord of the Rings” subreddit, whose post about it is one of the top-upvoted photos in the online community.

You can see the small metal detail briefly during the chase scene between the nine riders and Arwen in “The Fellowship of the Ring.”

The lighting team made a special board of Christmas lights to reflect in Galadriel’s eyes as a way to make her seem more mystical and special.

You can see the cluster of small lights reflecting in actress Cate Blanchett’s eyes when the Fellowship first arrives in the woods of Lothlórien. This is specific to Galadriel and doesn’t appear with any of the other Elvish characters.

The special lighting rig (which was described as “Christmas lights” in the behind-the-scenes feature) was crafted to help show the way Galadriel’s eyes are described in Tolkien’s books as containing a “deep wisdom.”

The Gates of Argonath were built as 8-foot-tall miniatures, and the prop design team specifically carved out chunks of the nearby cliff as an in-universe explanation of how the statues were created.

In “The Fellowship of the Ring,” the traveling companions pass by two enormous statues that are carved into the cliff sides.

As the prop team explains in a behind-the-scenes feature, they figured that (in the narrative universe of “The Lord of the Rings”) the statues would have been made primarily from the natural rock in the cliffs.

But the extended arms couldn’t have been carved in a single piece, so those sections would have instead been crafted using mined blocks of rock from the nearby mountain.

That’s why when you look closely, the Argonath statues have little square markings starting at the top section of the arm. The mountain next to the statue has big chunks removed from it, almost like gigantic stairs.

Those small design details add to the realism of the shot and show the extreme amount of thought put into every aspect of these movies.

During Boromir’s death scene, the score includes a chorus singing in the Elven-Tongue called Sindarin. The words are a quote that Faramir says in Tolkien’s second book, “The Two Towers.”

The chorus can be heard faintly in the scene, just as Boromir is speaking his last words to Aragorn (“I would have followed you, my brother … my captain … my king”).

It’s much easier to hear the words in the song “The Departure of Boromir” on the official soundtrack by Howard Shore, which you can listen to here. The translation from Sindarin (Tolkien’s invented language) to English was done by David Salo.

The words translate to the following quote:

“I do not love the bright sword for its sharpness, nor the arrow for its swiftness, nor the warrior for his glory. I love only that which they defend.”

Boromir’s younger brother Faramir speaks this line in the second book of the trilogy, “The Lord of the Rings: The Two Towers.”

After Boromir’s death, Aragorn takes his vambraces (the armor on his forearms) and wears them as his own in tribute.

You can see Boromir with the vambraces on throughout “The Fellowship of the Ring.” They’re embossed with the sigil of Gondor.

Following Boromir’s death, the movie cuts to show Frodo and Sam splitting off from the Fellowship. Then when it cuts back to Aragorn, Gimli, and Legolas, you can see Aragorn strapping on Boromir’s vambraces.

It’s a touching way Aragorn chooses to honor his fallen fellow man, and the moment is so subtly filmed that many fans might not have noticed it.

Sun Sep 27 , 2020
Of all the cultural formats, visual arts would seem the most easily adapted to the COVID era. Museums have long used timed tickets for blockbuster exhibitions. Galleries can be visited by appointment. And film can be readily viewed on the small screen — or as we’ve rediscovered, on a large […] 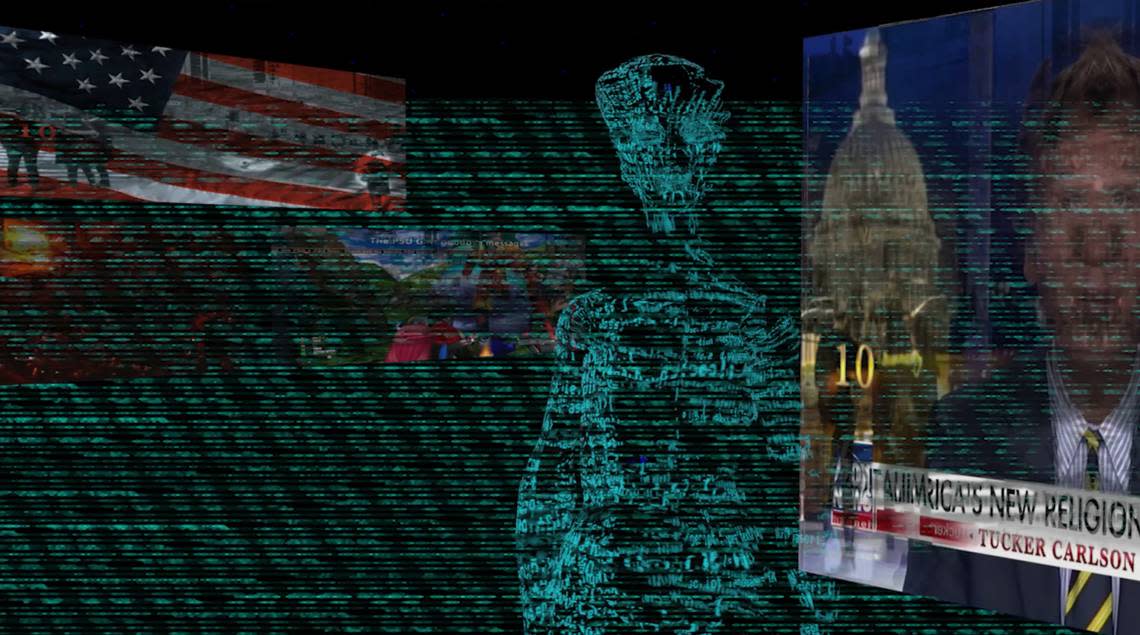