Whether you’re pulling up to a first date, parked outside a holiday function, preparing for a job interview, or in any situation where you have to communicate with people you don’t know so well, you may be plagued with worries about how to start a conversation and keep it going. […]

Whether you’re pulling up to a first date, parked outside a holiday function, preparing for a job interview, or in any situation where you have to communicate with people you don’t know so well, you may be plagued with worries about how to start a conversation and keep it going. While small talk isn’t everyone’s cup of tea, it’s possible to partake without it feeling like torture. Simply leaning on the four elements of conversation can help facilitate the process.

The elements of conversation functions like a formula for connecting with others. And that’s great because this connection cultivates a sense of belonging, which is crucial to our well-being. “We all have this internal need and longing to feel like we belong, and the way we make that happen is through conversation,” says therapist Michelle Chalfant. Read on to learn how you can utilize four elements of conversation to get better at small talk.

This element of conversation is exactly what it sounds like: asking a question. More specifically, low-pressure, simple questions that aren’t overly personal in nature are great for getting someone to warm up. Asking someone what music they like, what they’re watching on TV, and what they do for work all fit into this low-pressure category, says licensed clinical psychologist Aimee Daramus, PsyD. “If you’re at a party, [you could ask how they] know the person,” she adds. “If you’re interviewing for a job, you can ask, ‘What’s your experience been like here?’ or ‘How did you get hooked up with a job here?’”

The key to properly using the asking element of conversation is to avoid yes-or-no questions so that you give the subject a chance to respond in more than one word.

Chalfant suggests using this this conversational element as an opportunity to ask for recommendations, which could be particularly helpful if you notice that who you’re talking to isn’t totally into talking about themselves. Start by asking yourself what you might need—maybe an air fryer, a cast iron skillet, or new bedding—and then give that brief context before asking the subject what they suggest. The key to properly using the asking element of conversation is to avoid yes-or-no questions so that you give the subject a chance to respond in more than one word.

This element of conversation is best characterized as sharing an interesting tidbit about yourself, says Dr. Daramus. If you’re a mechanic, you might say something like, “I was working on this car today and learned that…” Or, if you’re a teacher, this might look like sharing an experience that you’ve had in the classroom. Sharing gives listeners the opportunity to ask follow-up questions and removes the pressure of having to talk about something you’re not totally familiar with.

If you know yourself to be shy or to go blank when put on the spot, consider coming up with something to say beforehand. It could be a fun memory from childhood or something you recently learned about yourself.

Some other ideas? Chalfant adds that If you’re going to a bigger gathering, you could cooking something and bring it, which allows you to share what you made and the story behind it. You could also share what you’re watching on TV and ask others what they’re watching. Or, you could also stick to the basics: A simple, “My name is… and I’m from…” might do the trick and encourage others to share their background, which can serve as an opportunity for people to connect.

With the conversation element of including, Dr. Daramus says it’s integral to first listen to what others are saying and notice what they’re doing. If you see that someone is quiet, but their nonverbal communication or body language indicates that they’d like to speak (think, they appear to almost start talking), you can try asking them their opinion on the matter at hand.

Perhaps you observe that someone is standing alone in the corner. In this case, including may look like going up to them and saying something that you think they’d relate to. However, you want to be mindful that you’re not making it about you. Give them a brief example of when you’ve been alone at a party, and let them take it from there. Once they open up, a simple “I totally get that” will build the connection, which might ultimately make conversation more natural.

Including doesn’t all have to be heavy, though. Chalfant adds that giving compliments also falls under this category. Whether it’s something you like about the person’s vibe or decorations around the host’s house, giving a compliment can help start a conversation by engaging the other person.

“Proposing is…moving things forward,” says Dr. Daramus. You can suggest playing a game or getting another drink when you want to use proposing as a way of making small talk. (Dr. Daramus says you get extra “including” points if you do that!)

You can also tap into proposing to steer the conversation away from topics that you don’t want to discuss. In practice, this might look like saying, “You know, I’d rather talk about…” and follow that up with something that you’re more comfortable discussing.

Another great way to practice proposing, Chalfant adds, is to shift to a lighter topic that folks have strong feelings about but isn’t seriously divisive. For instance, take daylight saving time. Whether someone likes it because it helps them fall asleep earlier or hates it because they find it tougher to stay happy amid shorter days, it’s a good, low-stakes topic that gives everyone the opportunity to harmlessly opine.

Oh hi! You look like someone who loves free workouts, discounts for cutting-edge wellness brands, and exclusive Well+Good content.Sign up for Well+, our online community of wellness insiders, and unlock your rewards instantly.

Fri Nov 19 , 2021
Rory O’Connor says high street to take a heavy hit at Christmas Click to expand UP NEXT The Office for National Statistics (ONS) reported retail sales volumes were up 0.8 percent overall in October. Clothing in particular has led the recovery with sales up 6.2 percent. Amid the overall […] 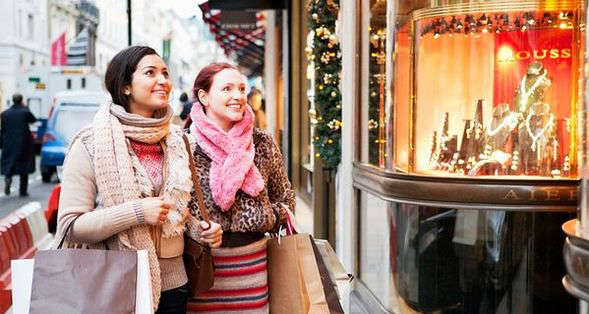