Being a professional athlete can easily make you a millionaire, but these sports stars have expanded their wealth by turning those team paychecks into veritable empires. See how these players have been making bank outside of the sports world. Last updated: Aug. 7, 2020 Table of Contents 1. Shaquille O’Neal2. […]

Being a professional athlete can easily make you a millionaire, but these sports stars have expanded their wealth by turning those team paychecks into veritable empires. See how these players have been making bank outside of the sports world.

Former NBA pro Shaquille O’Neal has invested his money in companies he believes in — and it’s ended up paying off for him. O’Neal formerly owned 10% of Five Guys’ entire franchise portfolio and eventually sold it, telling CNBC that the burger business was “very good” to him. He was also an early investor in Google and invested in Ring before it was acquired by Amazon for $1 billion.

NBA great Earvin “Magic” Johnson is the chairman and chief executive officer of Magic Johnson Enterprises, an investment conglomerate valued at an estimated $1 billion, according to the company’s website. He also formerly owned 125 Starbucks stores, which he has since sold.

Former boxer George Foreman has gotten rich from his namesake grill. Hundreds of millions of units have been sold since it was introduced in 1994, Forbes reported, and Foreman told AARP that the grill has earned him as much as $8 million a month.

Michael Jordan has had a long-standing partnership with Nike — and it’s been incredibly lucrative. By 1986, Nike had sold $100 million worth of Jordan shoes and clothing, and in 1997, the Jordan franchise was spun off as its own brand, Quartz reported. In December 2019, Nike CEO Mark Parker announced that Jordan Brand had surpassed another milestone, with its first $1 billion quarter.

Making the Big Money: The Highest-Paid Athlete of Every Year From 1990 to 2020

World Series champion Alex Rodriguez founded A-Rod Corp as a real estate investment firm back in 2003. It has since expanded into real estate development, as well as investing in other assets across industries, including sports and wellness, media and entertainment. A-Rod Corp is now a fully integrated investment firm with over 500 employees.

NFL quarterback Jordan Palmer has founded a number of businesses. In 2007, he co-founded Rock Software, which built mobile apps for athletes and celebrities. He is now a partner at the online marketing agency Common Thread Collective, whose clients include DIFF Charitable Eyewear and TheraGun. Within the sports realm, Palmer is the founder of the quarterback training camp QB Summit.

Former football player John Elway is now the president of football operations and general manager of the Denver Broncos, and he also is a successful entrepreneur off the field. He is the co-owner of Elway’s steakhouses, which has four locations, as well as several John Elway car dealerships — John Elway Cadillac of Park Meadows; John Elway Chevrolet in Englewood, Colorado; and John Elway Chrysler Jeep Dodge Ram in Claremont, California.

Super Bowl-winning NFL punter Steve Weatherford has created his own fitness empire under the Weatherford Fit umbrella. This includes a supplement line called Veritas, e-books and online training programs. He also has his own self-improvement podcast, “The Steve Weatherford Show: The Secrets To A High Performance Life.”

Pro skateboarder Rob Dyrdek has built a number of companies over the years, both inside and outside the realm of skateboarding. Outside of the sport, he launched the production company Superjacket, which created the show “Ridiculousness.” He also developed the full-service venture studio, Dyrdek Machine, which helps other entrepreneurs build their brands.

One of the Dallas Cowboys’ most well-known quarterbacks, Roger Staubach has built a veritable real estate empire. By 2008, his real estate firm had 50 offices in North America and 1,100 employees, Forbes reported. In order to expand the firm globally, Staubach sold Staubach Co. to real estate firm Jones Lang Lasalle for a multiyear payout that totaled $640 million. But he’s not out of the real estate game yet — in 2019, he partnered with the Cowboys to build a luxury apartment high rise next to the team’s world headquarters and practice facility in Frisco, Texas.

Find Out Who: Today’s Richest Athletes in the World

Tennis pro Venus Williams is the founder of several companies — EleVen by Venus Williams, which includes a line of activewear and sunscreen, and V Starr, an interior design company.

Tennis great Serena Williams founded the investment firm Serena Ventures in 2014 to give opportunities to diverse founders. It now has a $12 billion market cap, according to the company’s website. Williams also has a line of clothing and accessories, S by Serena Williams, and a namesake line of fine jewelry.

Four-time MVP LeBron James is not only the highest-endorsed NBA player of 2020, according to Forbes, but he’s also generating plenty of money with his own companies. James has a production company, SpringHill Entertainment; a media company, Uninterrupted; and is a partner in the health and wellness company Ladder. He is also the co-owner of 19 Blaze Pizza franchises in Chicago and South Florida and is an investor in the pizza chain.

Ten-time NBA All-Star Kevin Durant is the co-founder and president of Thirty Five Ventures. The umbrella company incorporates a number of business entities, including Durant’s personal brand and marketing portfolio, an investment portfolio, the Kevin Durant Charity Foundation and a multichannel sports business network, The Boardroom, distributed in partnership with ESPN.

Two-time NBA MVP Stephen Curry formed SC30 in 2017 to manage his investments, brand partnerships and philanthropic ventures. He also has a production company, Unanimous Media, which has a development deal with Sony Pictures, Forbes reported.

And more recently, Curry cut a deal to receive an equity stake in Oxigen — a water-based beverage that purportedly aids in muscle recovery. Curry intends to help market the beverage, and his equity stake means he’ll share in the profits if the company takes off.

Tennis pro Maria Sharapova has her own line of luxury candies, Sugarpova, and is a co-owner of the sunscreen brand Supergoop.

See: Richest Athletes From Every Decade

In addition to the multimillions Cristiano Ronaldo makes from his salary and endorsement deals, the soccer star adds to his fortune with his own company, CR7. The CR7 brand includes a line of footwear, underwear, denim and fragrances.

In addition to co-founding the Premier Lacrosse League, which was named one of the Top 10 Most Innovative Company in Sports by Fast Company, Paul Rabil has found entrepreneurial success outside of the sports world. The Rabil Companies portfolio includes the “Suiting Up” podcast, the Paul Rabil Experience, the Rabil Tour, Project 9 Events and the Rabil Collection. He is also a partner in the venture firm Rabil Ventures.

Former Milwaukee Buck Ulysses ‘Junior’ Bridgeman turned his attention to the restaurant franchise business after retiring from the NBA. He is now the president and CEO of Bridgeman Foods, which owns 360 restaurants across 16 states, according to the company’s website. The company also provides food services for corporations, colleges and universities, sports facilities and more.

NBA star Grant Hill established the marketing and management company Hill Ventures, Inc. back in 1994. In addition to managing and maintaining his marketing and promotional activities, the umbrella company now oversees his expansive real estate portfolio and personal art collection tour. Hill also has a production company and is the founder of the private equity mezzanine fund Penta Capital.

Dwayne Johnson hasn’t been an athlete in quite some time, but the man who was once an international professional wrestling superstar has become a huge success outside of the ring. Not only has he transformed into one of the world’s most bankable movie stars, but he has made some major moves in the business world, too.

Most recently, the former football star at the University of Miami made a big splash when he partnered with RedBird Capital to purchase the XFL for $15 million. But Johnson has been at it for years, also founding Teremana Tequila and securing a branding partnership with Under Armour for a line dubbed Project Rock.

This article originally appeared on GOBankingRates.com: Steph Curry and 25 Athletes With Major Business Empires Outside of Sports

Bentley Bacalar Is All About Exclusivity

Sat Aug 8 , 2020
From Car and Driver Exclusivity was never an issue in the early years of the automobile. Those who were wealthy enough to afford cars before the era of mass manufacturing would normally commission their favored style of bodywork from the same coachbuilders who had previously made horse-drawn carriages. It was […] 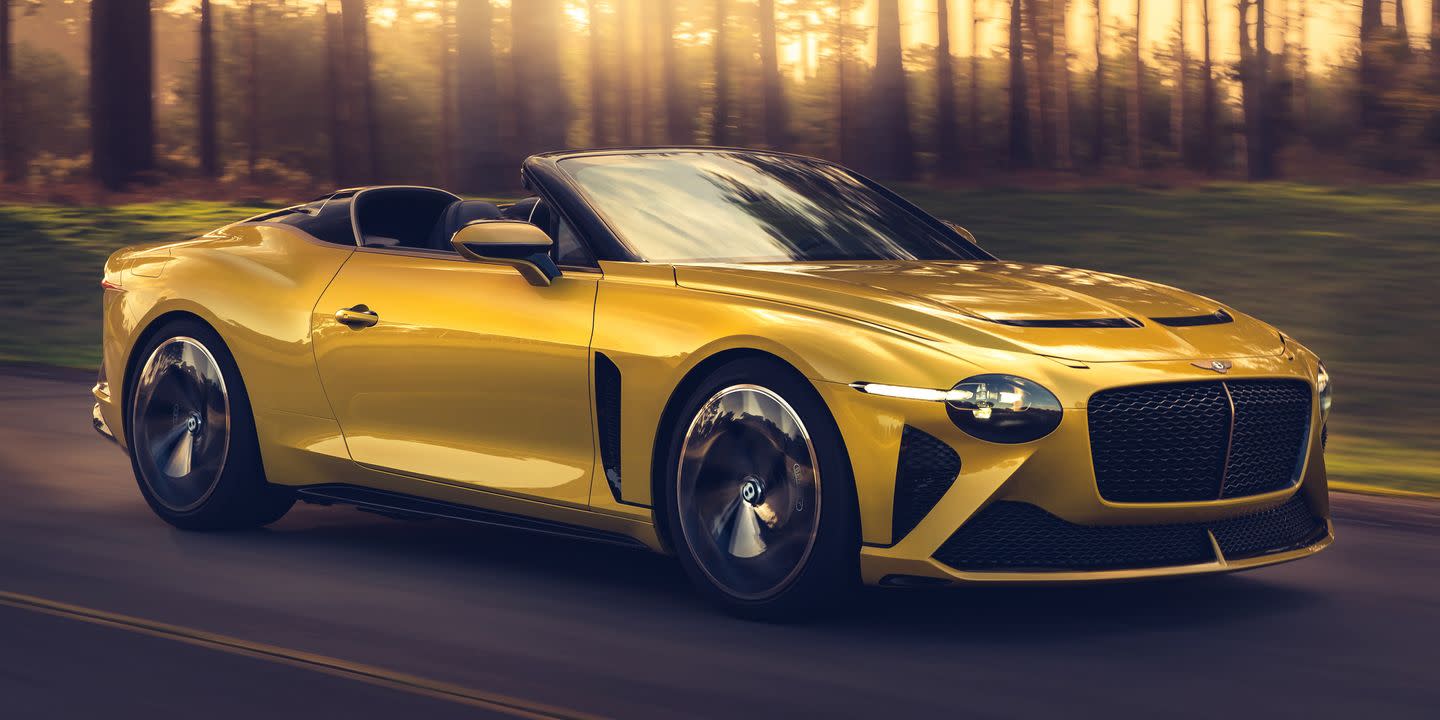