Thursday marked Starbucks’ Red Cup Day, and it’s time once again for the company’s launch of its unique holiday-decorated reusable red cups. This year’s reusable cup is made with 50% recycled content to honor the chain’s 50th anniversary. But what have past holiday cups looked like? Years ago, the Starbucks’ […]

This year’s reusable cup is made with 50% recycled content to honor the chain’s 50th anniversary. But what have past holiday cups looked like?

Years ago, the Starbucks’ holiday cup wasn’t the signature red it is now. It came in magenta, sapphire, emerald and amethyst, according to the coffee company. Most designs featured swirls and hand-drawn holly leaves while newer cups are a classic holiday red with shimmering ribbon and stars.

In 2015, the Starbucks holiday cup was simply a plain red with no designs and quickly caught criticism online with the hashtag #ItsJustACup.

Starbucks said the plain cup allowed customers to put their unique drawings and message on it, but some said it’s one more way companies are stripping the Christmas message from the holiday season. Others argued it was just a cup and didn’t have any religious agenda behind it.

In the past 10 years, the Starbucks holiday cups have mostly been red but uniquely designed with snowflakes, ribbons and more. Here’s a look.

Ribbons, sparkles and dots were the main theme in 2020, as “Carry the Merry” was written on the front of some versions.

Jeff Wilkson, creative director for Starbucks, said at the time the thought was the cups would carry a “merry” message to those who used and saw them.

In 2019, the theme was polka dots and stripes: the four cups featuring polka dots, merry dance, merry stripes and candy cane stripes. The goal? To create mini moments of joy with each stripe, dot and design.

Reusable but make it vintage in 2018

In this year, the company debuted four new designs paying homage to past designs that featured vintage colors and patterns. This was also the first year the company introduced the reusable holiday cup.

2017 was the year for customer creativity and customization. Each cup included space for customers to include their own stripes, dots and designs.

In a tradition that continued through later years, contestants from six countries designed their cups with holiday lights, snowflakes and more in 2016.

After years of snowflakes and twirls, the 2015 red cup was simply red and nothing more. The minimalist design caught criticism from some saying it took away the “Christmas spirit” while others created the viral hashtag #ItsJustaCup.

Mostly red with a little snow in 2014

With yet another simpler look, this year’s theme was soft brushed trees and snowflakes.

Keeping the decorations light in 2013

With the signature red color dominating most of the cup, small ornaments and twirls were featured.

The Greatest Snowman of 2012

The giant snowman stole the show during 2012. The friendly, large snowman covered most of the classic red holiday cup.

More snowman and animals were featured in 2011’s holiday cup. Carolers, animals and snow were painted smiling in winter gear on the cup.

18 holiday markets in the Philadelphia area

Thu Nov 18 , 2021
It’s the season of gift giving. And while we can all do our shopping without even leaving our couches, there’s something special about going out and choosing the perfect gift for a loved one (or yourself) in person. (Plus, there’s no worry about shipping delays, which are expected to be […] 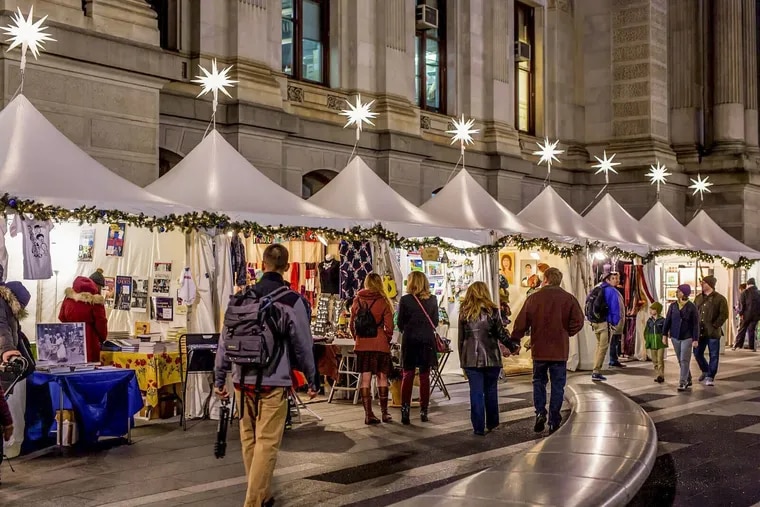