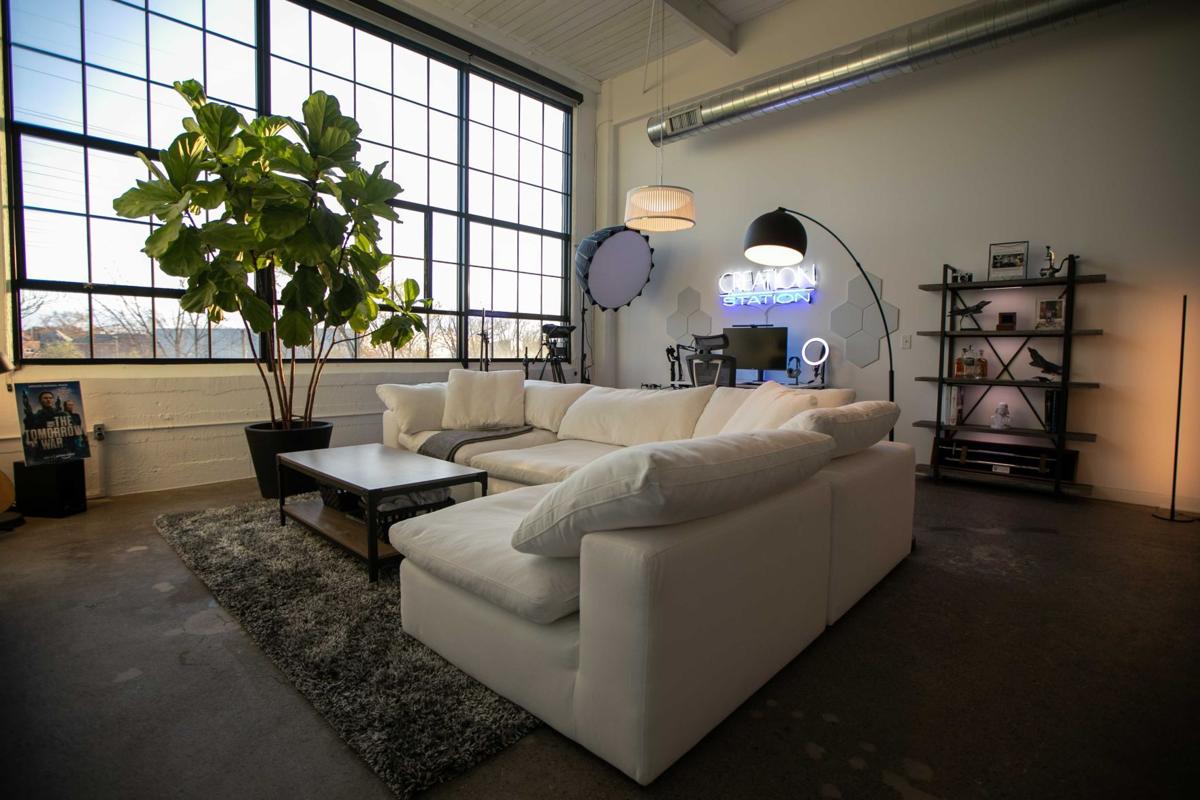 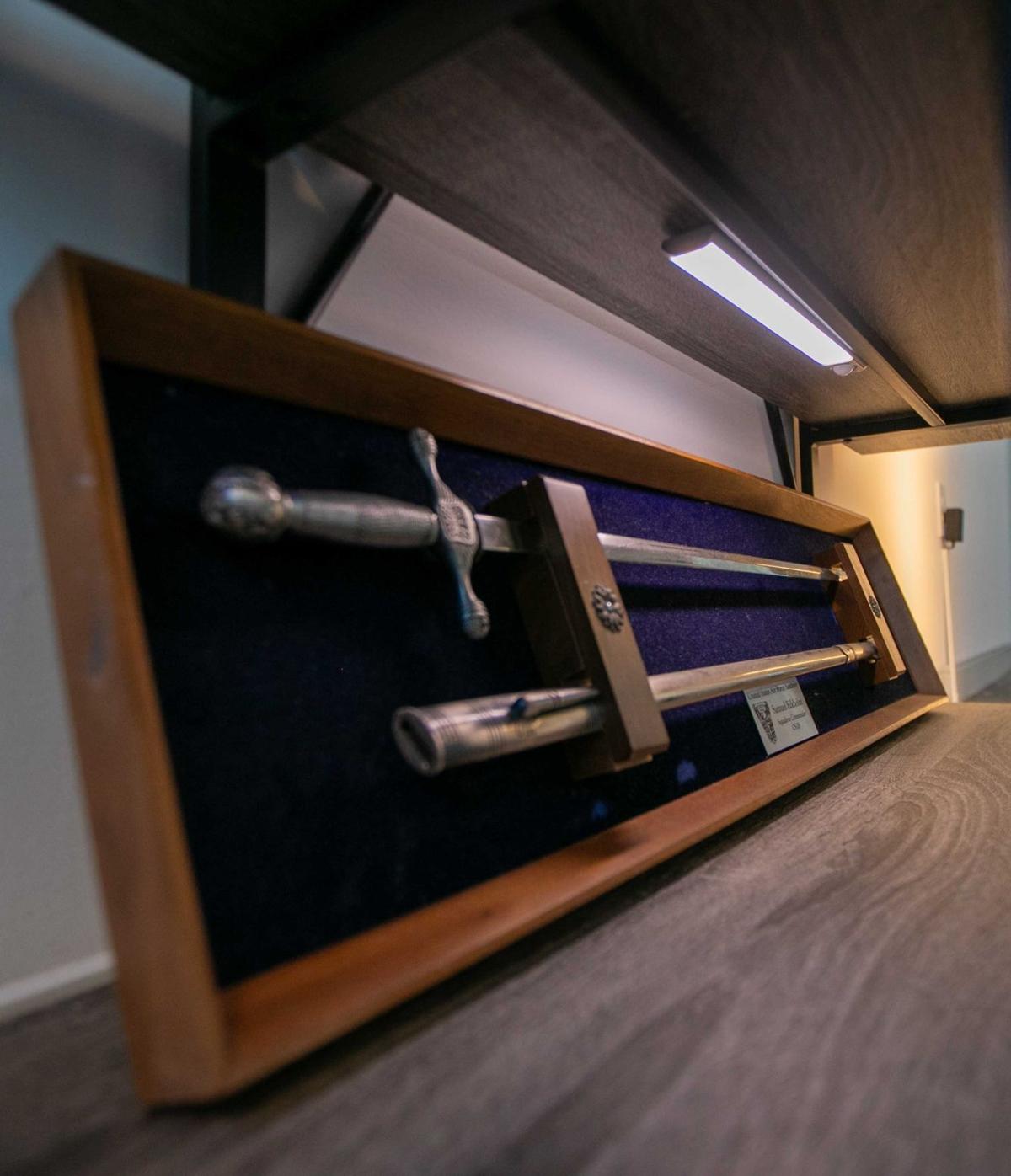 A modern shelf in the open living room houses some of Eckholm’s most treasured personal items, including this Air Force Academy saber. 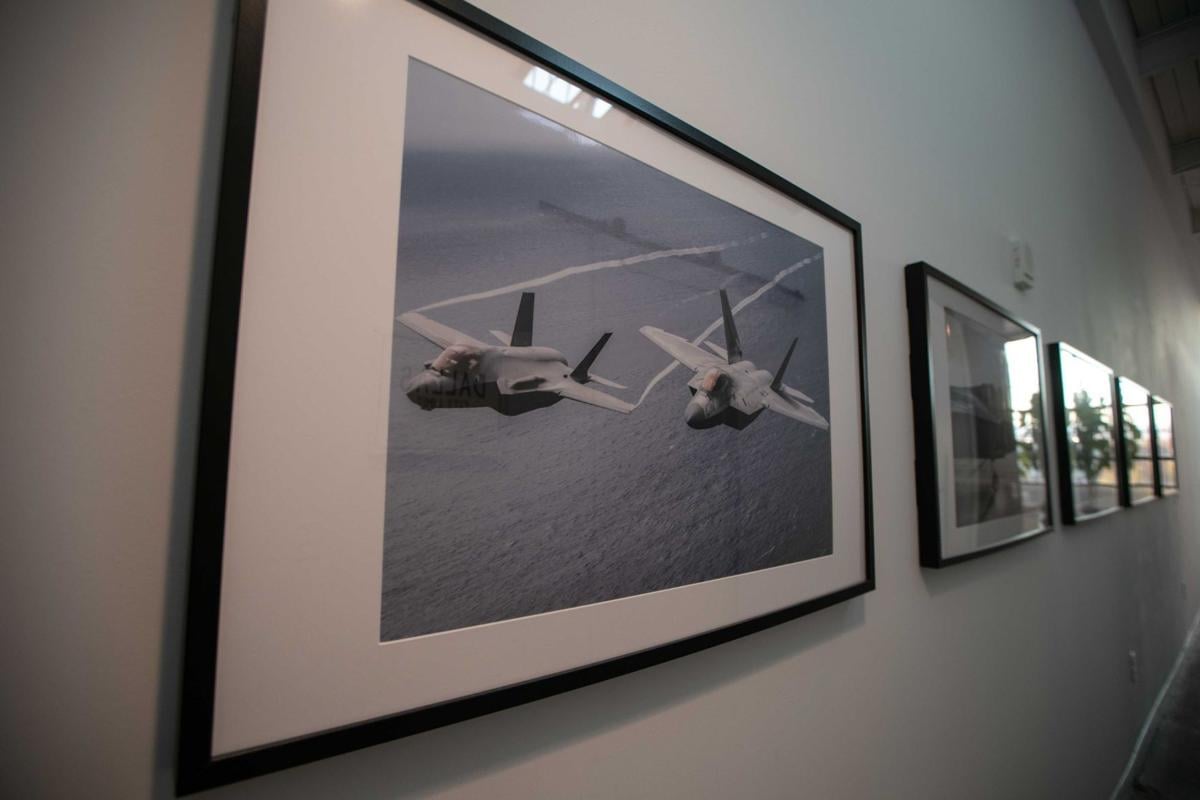 The entry wall leading from the front door into the open living space is lined with framed photos of military aircrafts that Eckholm took himself during his time traveling the world as an Air Force photographer. 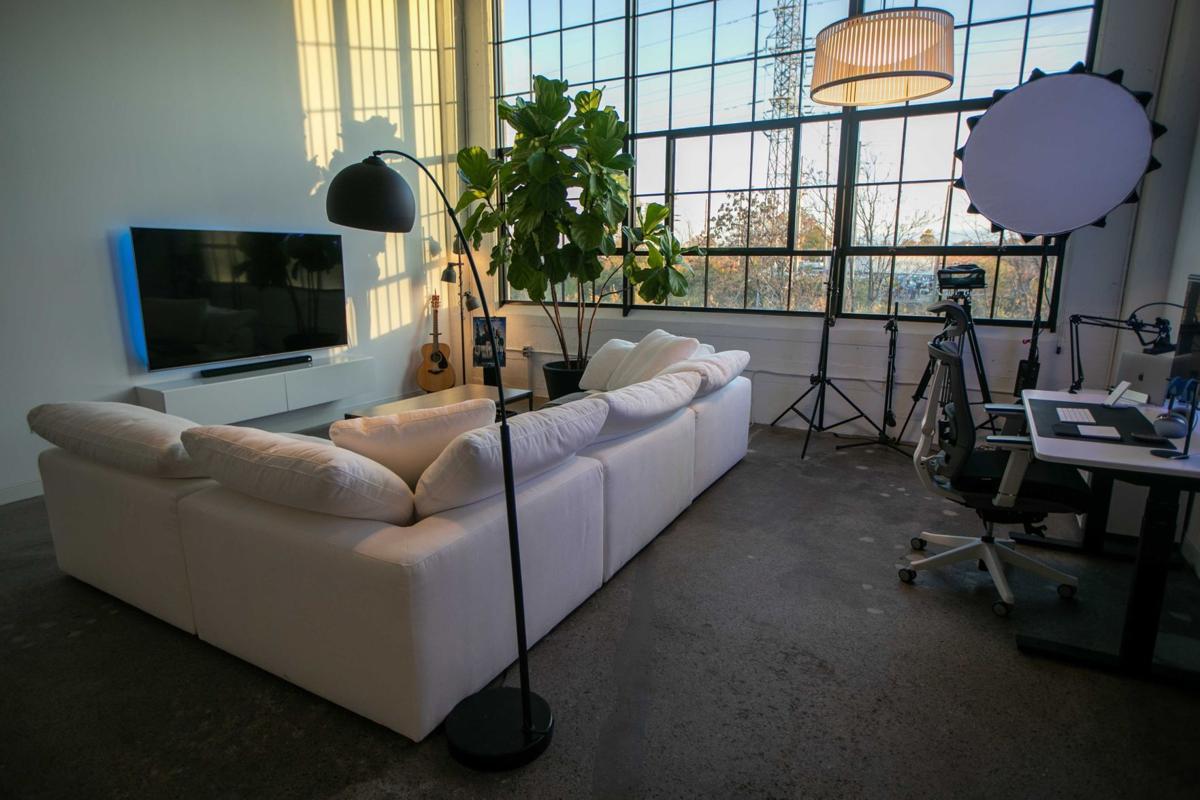 By Amy Burger | Special to the Post-Dispatch

Sam Eckholm refers to his light-filled apartment in Forest Park Southeast’s Woodward Lofts as “The Hangar” — a nod to his love of aviation and his job as an officer in the United States Air Force. The long entry wall leading from his front door into the open living space is lined with large, framed photos of military aircrafts that Eckholm took himself during his time as an Air Force photographer traveling the world with the Lockheed Martin F-22 Raptor demo team.

Originally from Dallas, Eckholm graduated from the Air Force Academy in Colorado Springs in 2018, following in the footsteps of his dad, a former Air Force pilot. He was initially stationed in Virginia, where he got his first apartment — though he never furnished it because he was traveling 300 days a year to places such as Dubai and Singapore doing air shows. Growing up with social media, Eckholm loved to make videos and started his journey as a YouTube content creator by documenting his experiences in the Air Force.

In January, he was assigned to Scott Air Force Base in St. Clair County, but being young and single, he knew that he didn’t want to live in on-base housing, which is typically occupied by families.

“I knew nothing about St. Louis except that there was an Arch,” he says. “When I found out that I was getting assigned here, I immediately started looking at cool places to live and booked a trip to go apartment hunting. I toured a dozen different apartments, and I was blown away at all the different districts.”

When he toured the Woodward Lofts in the Forest Park Southeast neighborhood, also known as the Grove, he knew it was perfect for him. Developed in the historic former Woodward & Tiernan Printing Co. building, which is on the National Registry of Historic Places, the lofts combine historic industrial architecture with modern amenities including communal workspaces, a fitness center and a rooftop pool.

“This building had everything I was looking for and is perfectly located,” Eckholm says.

“What I love about the Grove is that it’s not overwhelming, but it still has awesome spots and nightlife. I love being able to walk to restaurants and breweries.”

The space itself also drew him in, with a wall of industrial-style paned windows, 15-foot ceilings and a modern kitchen in shades of gray and white.

“I’ve always been into a bright environment — I like the lightness of it. It has character but is also very modern,” he says.

Moving in mid-pandemic, a lot of the building’s amenities were still closed, so Eckholm focused on making the space his own with new furnishings and décor that spoke to his passions and sense of style.

“I couldn’t wait to design this space. I had nothing when I came in, and I slowly started to build each section,” he says.

The open kitchen/living area is sleek and stylish. Eckholm had long coveted the signature sectional Cloud Sofa from Restoration Hardware, but the size he needed would have cost around $20,000. By researching online, he was able to find a Florida-based manufacturer called City Furniture that made a nearly identical one for a fraction of the cost. The deep-seat white fabric sectional is the perfect centerpiece to the space. He complemented it with a gray and white shag area rug from Overstock that is so soft and comfy, he often sits on the floor.

The windows overlook train tracks, but foot-thick walls keep the sound to a minimum, and Eckholm says he’s grown accustomed to watching the rail cars rumble past, wondering what they are carrying.

The area of greatest importance to Eckholm is his “Creation Station” — a designated space along the back wall of the living room that functions as a mini-studio where he creates his YouTube videos. It is anchored by a black-and-white smart desk from Autonomous AI that can be raised and lowered at the touch of a button, paired with an ultra-modern ergonomic chair from the same company.

In addition to all of his technical necessities including an adjustable ring light, 32-inch swiveling monitor and professional microphone, the crown jewel of the setup is a custom-made neon light that says “Creation Station” in blazing red and blue, created by Dale Sign Service of Ballwin.

“I always loved neon signs, but I wanted the authentic glass tubes, so I reached out and asked them to make me a custom sign. I absolutely love it,” Eckholm says. “I spend 90% of my time in this space when I’m at home.”

A nearby shelf is well-curated with items of personal importance to Eckholm including a custom Lockheed Martin F-35 model airplane, his Air Force ring, and his Air Force Academy saber and yearbooks. In a nod to his love of all things “Star Wars,” he also has a small bust of Darth Vader, a linear floor lamp next to the shelf that reminds him of a lightsaber and a runner rug in the hallway featuring the Millennium Falcon.

Having the apartment finished exactly as he envisioned has allowed Eckholm to further expand his YouTube content and other interests while exploring all St. Louis and the Grove neighborhood have to offer.

“I really like the change of pace because I can put a lot more into the personal side of things and doing my job 9 to 5, but then coming home and focusing on my own stuff,” he says. “I love the area, but the setup is everything I wanted. I’m so happy with how it came together.”

Stay up to date on life and culture in St. Louis.

Sat Dec 4 , 2021
CLAIM: Video captures a child yelling an expletive at Jill Biden as she begins reading a story to a group of students. THE FACTS: The video clip was manipulated to insert audio of a child yelling a disparaging comment. It emerged Monday after the first lady sat down with a […]