A homeless cat who turned 19 in the care of an Ohio animal sanctuary on Tuesday has been adopted after staff threw him a birthday party.

Sammy became a hit online this week after Cincinnati Animal CARE Humane Society employees adorned his cage with decorations and gathered to wish him a happy birthday.

A Facebook post documenting the occasion had over 1,000 likes at the time of writing, plus hundreds of shares and comments.

Then, on Wednesday, Sammy was adopted. The shelter said in a Facebook post: “It’s been a big week for Sammy!

“His adopter, who actually messaged us about Sammy before he became internet famous, was waiting outside before we even opened today! He is going home with a fellow senior kitty and has already been spoiled with a new hat!” 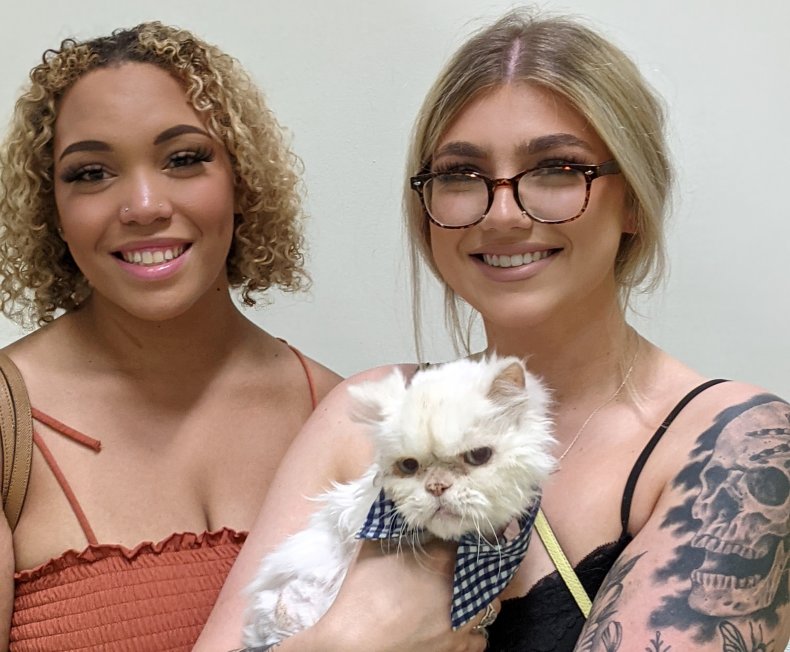 Facebook users commented on the update to express their delight at the good news. One wrote: “So very touched about this adoption! Lucky Sammy and new momma!”

Another said: “Thank you for giving sweet Sammy a chance to live out his life in a loving home. I have a 19-year-old senior too and she’s my baby.”

The Cincinnati Animal CARE Humane Society shared footage of Sammy’s adoption on its TikTok profile where he was filmed in the arms of his “forever mamas.”

Afterwards, one of Sammy’s owners posted their own TikTok update showing the cat sleeping in his new bed, and said the cat had had a health check, ears cleaned, and nails trimmed.

Ray Anderson, media and community relations manager at the Cincinnati Animal CARE Humane Society said Sammy came into the care of the shelter on June 7 as his owner had to go into assisted living where Sammy was not allowed.

It was from Sammy’s previous owner that shelter staff learned the senior cat’s birthday was this week.

“Sammy is a wonderful ambassador for senior cats though, so we’re going to turn one of our free roaming cat areas into Sammy’s Senior Center this week, so all of our lovable seniors can find homes!

“If readers are inspired by Sammy but aren’t able to make it to Cincinnati, we encourage them to adopt a senior cat from their local shelter. Shelters nationwide are struggling with capacity right now, ours included!”

Fri Jun 18 , 2021
RAYMOND — Relatives of those buried in the New Pine Grove Cemetery were shocked when they showed up this spring to prepare headstones for the season and found flower urns and mementos that went untouched for decades had suddenly disappeared. “This year when I came down to put plants in […]