One of Disney World’s most iconic resorts is about to undergo a Moana-inspired makeover!

Disney’s Polynesian Village Resort opened with the Magic Kingdom in 1971, and has been a favorite of parkgoers ever since. On Tuesday, Disney announced that the resort would not be reopening in October as was originally planned, but instead will open in the summer of 2021, after some major renovations. (It shut down in mid-March due to the coronavirus pandemic.)

The Moana-inspired refresh, which was first reported by the Orlando Sentinel, will see changes to the resort’s main guest rooms and Great Ceremonial House will be closed for refurbishments. While elements of the decor will be inspired by the 2016 animated film, the hotel will maintain the integrity of its original design and won’t be elaborately re-themed as a Moana resort.

A Disney spokesperson told The Points Guy, “changes to the rooms will include a move to a Pacific Ocean-inspired color palette as well as details, patterns and textures from Disney’s Moana.”

Fans of the movie will understand the natural tie-in: Moana is a Polynesian princess who lives on an island called Motunui, and much of the film takes place in the South Pacific locale.

RELATED: PHOTOS: Every Room in This House Has a Different Disney Movie Theme — See Inside!

Disney’s Polynesian Village Resort’s on-water bungalows and villas are currently open and will remain open, according to the Disney website. They will not be undergoing any renovations.

While most Disney resorts are currently open to the public in some capacity, there are still several that have yet to reopen following the months-long closure. Those include Disney’s Grand Floridian Resort & Spa, opening September 21; Disney’s Coronado Springs Resort, opening October 14; and Disney’s Art of Animation Resort, opening November 1.

Many of these dates have been pushed back several times due to uncertainties surrounding the pandemic.

Disney World officially reopened on July 11 after shutting down all operations in mid-March due to COVID-19. According to USA Today, the Walt Disney Co. lost nearly $5 billion throughout April, May and June due to the closures. It also cost them a total of $4.5 billion just to close the parks.

At the beginning of August, Disney announced the parks would be reducing its operating hours in September amid lower-than-expected attendance.

With their reopening, Disney announced numerous new health and safety protocols that guests and staff are required to adhere to.

All guests ages 2 and older must wear a face mask at all times while inside the parks — except for when drinking and eating or visiting one of the “relaxation zones.” This includes while riding on any of the attractions.

RELATED VIDEO: Disney Princess Jumps to Safety As Horse Gets Spooked by Balloon at Magic Kingdom

Other changes include requiring visitors to make reservations for each park online prior to admission, significantly lowering the number of guests allowed in, and reducing capacity on rides, various modes of transportation and in restaurants and retail stores.

There is still no opening date for Disneyland and Disney’s California Adventure. On June 24, it was announced that the Anaheim parks had “no choice but to delay” the intended July 17 reopening date. The decision came as the state government did not grant approval and guidelines in time to arrange the opening, due to a growing number of coronavirus cases there.

Thu Sep 3 , 2020
Consumer Reports has no financial relationship with advertisers on this site. Mercedes-Benz has taken the virtual cover off the next-generation S-Class during an online media event, revealing a redesigned flagship sedan that pushes technical boundaries for comfort, performance, and safety. Initial specifications point to powerful engines, a keen focus on noise […] 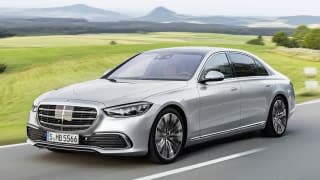