A couple of times a week, Milli Abrams watches as a strange ritual takes place outside her yarn shop in Richmond upon Thames. Depending on the day, a shifty looking off-duty builder or policeman will appear on the opposite side of the street from her shop, Tribe, and perform a drive-by. Glancing in as they stroll past the shop to check if anyone is inside, they will keep walking if they spy any customers, “but if the shop is empty they’ll come in and buy some yarn.” They are the “closet knitters”, Abrams says – keen hobbyists and loyal customers who love to knit but keep it all a secret from their colleagues.

“There is such a stigma around [men knitting] still,” says Abrams. “The builder’s workmates are constantly taking the mickey out of him about it, and the policeman will only do it at home and none of his colleagues know.”

This small band of secret customers forms part of a rush of new male knitters coming through her door in recent months. “This year in lockdown we’ve seen many more younger guys doing it,” she says. “They’re making chunky knits for their girlfriends and their mums, but they’re mainly picking it up in order to do something mindful and so they can put their phones down.

“When we first opened [in 2018] men were making practical things like laptop bags or socks and not a lot else, but now it seems to be a lot more about mindfulness and just the practice of doing it.”

Knitting, much like bread making and wild swimming, has experienced a surge in popularity this year as people have attempted to channel their anxiety and new-found free time into mindful hobbies that pull them away from a screen. John Lewis reported a big jump in haberdashery sales after the first lockdown in the spring, while online retailer Hobbycraft revealed searches for “knitting” were up by 400 per cent.

Meanwhile social media has been flooded with people showing off their knitting projects. Even Olympian Tom Daley has dived into the trend, posting pictures to a new Instagram account dedicated to his latest creations called @madewithlovebytomdaley. During lockdown, Daley produced an impressive collection, including a tea cosy, a jumper, a Christmas decoration and a poncho for his two-year-old son, Robbie. “I started knitting at the beginning of lockdown and have been obsessed ever since,” he said. “I have started to crochet now also!”

Former Rolling Stone Ronnie Wood also admitted recently to being a prolific knitter. “I used to hold the spool of wool for my mum,” he revealed on the Tea with Twiggy podcast. “She taught me the plain stitch and I still do it today. I knit endless scarves now.”

Instead of booze and drugs, then, the 73-year-old drinks copious amounts of coffee, and knits, telling Twiggy: “I’m an espresso man. But that is an old leftover habit from rehab. I couldn’t do anything else so coffee was the thing.”

If a Rolling Stone can freely admit to being partial to a spot of Pearl Ridge, why the embarrassment around the topic? Abrams says that, though the numbers of male customers in her shop has soared, men still tend to stay well away from her knitting classes. “Guys aren’t as keen on getting direction,” she says. “Before lockdown every third class we’d have a guy, sometimes really young, sometimes retired. But not many.”

“They just feel a bit more comfortable,” says Govani, whose own work has frequently appeared at London Fashion Week. “We had a customer from Germany who came to us to do a class [and said he had] found it very difficult to find a class where it was just guys.”

“Generally, men do not feel comfortable going to knitting classes,” says Govani’s business partner, Asif Dhanani. “What we’re trying to do is open things up.”

Dhanani, 49, a former banker who came to knitting late in life believes knitting can be just as therapeutic for men like him as it can be for women. “We feel that knitting has a lot to do with mental health,” he says. “It’s repetitive and it’s rhythmic. You don’t have to think very much. You’re talking to your friend and doing this repetitive thing and you relax. You hear these needles in the background going ‘click click click’ and you go into almost a trance. It occupies your mind in a certain way where you just chill. It’s quite addictive.”

Govani says it helps to make sure the task in the men’s classes is an enticing one. “I think people have preconceived ideas about knitting, but you can do a lot with it,” says Govani, who asks students in the men’s beginners classes (which have moved onto Zoom in recent months, and become even more popular) to make beanie hats. “So by the end of the class they’ll learn the basic techniques of knitting but they’ll also have a beanie hat that they can wear.”

Lloyd Burr took up knitting in earnest in lockdown as a way to stay busy. A 33-year-old journalist who lives in London and works for a New Zealand TV station, Burr started knitting merely as a hobby but soon found himself making scarves for friends and later strangers who came across his Instagram account. He has made more than 60 now.

“It is intimidating when you go into these shops with all these people who are really good at knitting, and they’re all women; they’re all nanas or older women,” he says.

“You’ve just got to be confident and explain what you want. Even the people who work in these shops, who are always women, have a bit of a chuckle [when you come in], so there’s definitely a stigma there.”

He gets some strange sideways looks on the tube, and is constantly expecting someone to take his picture “so they can [post it] and be like ‘oh my God there’s a man knitting’”.

Burr has made his peace with the relative novelty of a man in his thirties knitting, and now gets so much out of it personally that he only charges for the wool and the postage when selling his scarves. He is even trying to convince male friends back home in New Zealand to allow him to teach them. After all, he jokes, “we’ve got 40 million sheep”.

The history of fake-tree cellphone towers.

Mon Oct 12 , 2020
Tim Gray/iStock/Getty Images Plus. Slate has relationships with various online retailers. If you buy something through our links, Slate may earn an affiliate commission. We update links when possible, but note that deals can expire and all prices are subject to change. All prices were up to date at the […] 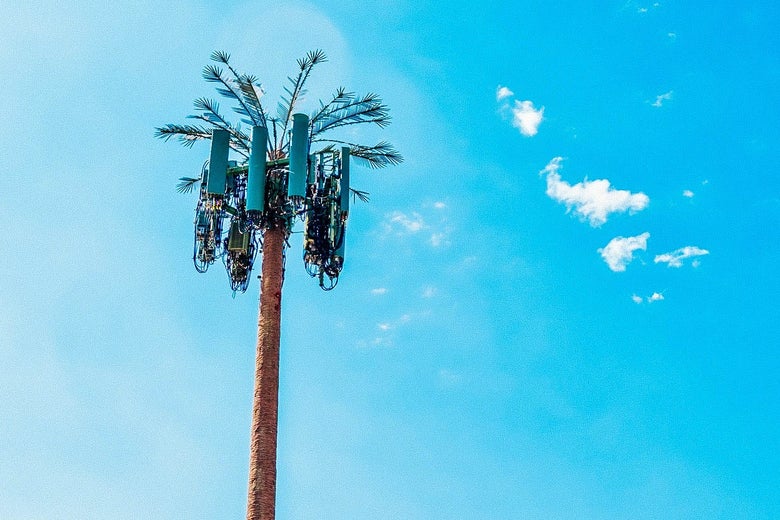