Tesla considers itself the electric car technology leader, but there’s a new competitor emerging to vie for that title. The company is Lucid Motors, a start-up in Newark, Calif., near Silicon Valley. The car is the Lucid Air, an ultra-luxury ride with advanced battery technology that sets itself apart with […]

Tesla considers itself the electric car technology leader, but there’s a new competitor emerging to vie for that title.

The company is Lucid Motors, a start-up in Newark, Calif., near Silicon Valley. The car is the Lucid Air, an ultra-luxury ride with advanced battery technology that sets itself apart with posh accoutrements and a market-leading range of 400 miles — more than 500 miles in a special edition. The base model matches the top range on the Tesla Model S and the special edition exceeds it by 100 miles. It also boasts a top speed of 200 mph, should anyone need to drive that fast. The Model S tops out at 155.

It’ll cost you. The price is $140,000 to $170,000. Sure, the vast majority of Times readers can only dream of owning such an automobile. But much of the cutting-edge technology that goes inside will trickle down to mass-market electric cars, which, by replacing internal combustion engines, will help fight global warming. That’s something to think about when the trees are on fire and the temperature is 111 Fahrenheit.

More “affordable” versions of the car — meaning they’ll cost as little as $80,000 — are scheduled for release late next year and into 2022. Taxpayers will subsidize the buyers of these vehicles via a federal tax credit of $7,500.

The company is accepting $1,000 deposits. Deliveries are set to begin early next spring.

Lucid is run by Chief Executive Peter Rawlinson, an affable Brit who came up through Jaguar and Lotus and served as chief engineer for the Tesla Model S, the car that woke the world to the possibilities of an electric automobile.

The target buyer is someone who might otherwise consider a gas-powered Mercedes-Benz S-class sedan. Or a Bentley.

Rawlinson said focusing only on competition with other electric cars, such as the Model S or the Porsche Taycan (another $150,000 car) limits the market opportunity.

“We’re competing in the worldwide luxury car market,” he said.

“Lucid seems to be setting its sights on global elites, people who might wish to trade up from BMW or Mercedes rather than switching over to Tesla,” said Michael Dunne, chief executive of ZoZo Go, an auto industry consulting firm with an emphasis on Asia.

Lucid originally planned to make a big splash in China’s high-end market, with capacious legroom to appeal to back-seat executives driven about town by chauffeurs.

“Chinese consumers are transfixed by exclusive products. They buy more Rolls-Royces and Bentleys than anyone else,” Dunne said via email. “So on paper, Lucid would be a good bet there. But China’s daunting import duties and tense relations with the U.S. will put a damper on sales — at least for now.”

That may be one reason the company has dialed down initial plans to make 60,000 vehicles a year to less than 40,000 next year.

Lucid Air has been a long time coming. The company first unveiled what would become the Lucid Air in 2016, but soon ran into a cash crunch and scrambled for more than a year to raise more money. Saudi Arabia’s sovereign wealth fund channeled $1 billion Lucid’s way in September 2018.

The rescue came in the nick of time: Just weeks later, agents of the Saudi government murdered dissident journalist Jamal Khashoggi, which temporarily put many of Saudi Arabia’s international business dealings on ice.

While it searched for money, Lucid made use of its bad luck. It took time to revisit all the engineering that went into the Air, applying developments in batteries and electric drivetrains toward greater efficiency, packing more power into smaller components, such as the two electric motors that drive front and rear axles at 650 horsepower each.

Lucid worked closely with its own Atieva battery division, which was chosen in 2016 as the sole supplier of battery power to racing teams at Formula E, the electric car version of the Formula 1 car race series.

As a result, the Lucid Air will rocket from 0 to 60 in under 2.5 seconds, the company said. Quarter-mile speed is under 10 seconds, which the company says is the fastest around for an EV. Top speed is over 200 mph, which is great for laps around the track but on public roads could put you in prison.

The look of the Air, inside and out, has already won over the automotive media. Alex Roy, an influential writer and podcaster, called the Air’s retro-futuristic design “simple, clean, perfect” in an assessment for the Drive.

“We see this as an opportunity to shake up the sector,” Jenkins said.

That’s a big ambition. Tesla is still regarded as the company that shook up the sector — but Tesla is now 17 years old.

At a recent event at Lucid headquarters, in a building once leased by the now-defunct blood-test company Theranos and just a few miles from Tesla’s Fremont, Calif., auto assembly plant, Jenkins showed off the car’s interior.

The roof is mostly glass. There’s a 34-inch touchscreen stretching across the dash, and an iPad-ish screen on the console that retracts to reveal an extra storage compartment.

The materials and the way they’re put together create a highly refined sense of uncluttered luxury that could have rescued Cadillac a long time ago if General Motors had a better handle on interior design.

The efficiency of the battery and drivetrain, which allowed the reduced size of motors and other components, creates more space for storage. Under the hood of most electric cars is what’s known as the “frunk.” There’s no engine so you can put stuff in there. The Air’s frunk is a cavernous 9.8 cubic feet. Add the trunk and the Air provides 26 cubic feet for luggage or groceries (or a hedge fund manager’s gold bullion).

Giving up a bit of legroom in the back seats gets you a few more battery modules, adding about 100 miles to the estimated 400 mile range.

The car comes with an advanced driver assist system known as Dream Drive, which includes adaptive cruise control, lane-keeping and other features. Attention is maintained through a driver-facing camera system that is becoming a key safety feature for the industry.

Lucid doesn’t pretend to offer “full self driving,” which is unlikely to be available for several years in any car sold through retail, though the company says it will be able to offer that level of autonomous driving via an over-the-air software update when it’s safe to do so. Notably, the car is equipped with lidar, an expensive kind of sensor that most driverless car experts say is essential to driver and public safety when full self-driving cars actually become available. (Teslas lack lidar, and CEO Elon Musk has disparaged it.)

As to how well the thing drives — who knows? Lucid has not yet made its new machine available for the automotive media to review.

Lucid unveils the Air, its luxury EV with up to 517-miles of range costing as much as $169K

Thu Sep 10 , 2020
Pretty much every electric vehicle that comes to market at the moment is compared to Tesla. That’s mostly because it’s the main option, it’s got a car for most core markets, and it regularly bests the competition in games of EV Top Trumps. Of course, there’s a lot more to […] 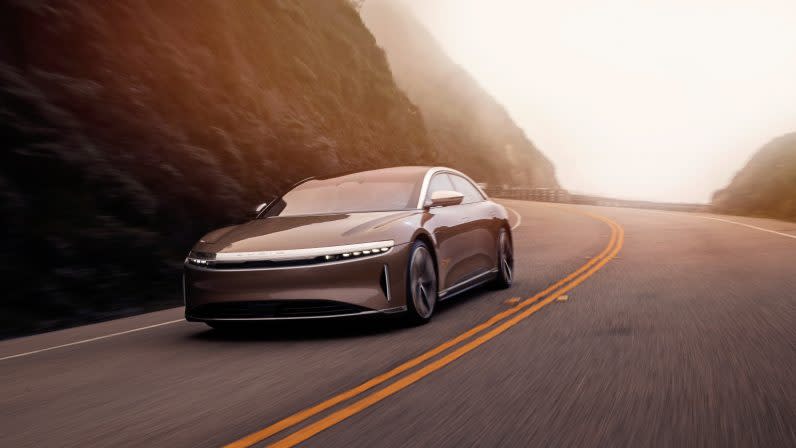