Call me a grinch but I’ve never been overly excited by ostentatious displays of festive lights, plastic Santas and glowing reindeer outside people’s homes. Frankly, I’m more likely to mutter “Bah, humbug” than deck the halls. But cometh the hour, cometh the man! And there’s no doubt two hard years of Coronavirus, multiple lockdowns and trying times all round including some of the most modest festive celebrations outside of wartime and austerity last year have fostered a new spirit of Christmas joy.

As a family, we’ve found ourselves debating the merits of different displays “that blow-up Rudolph’s brilliant” and even, whisper it, diverting down especially festive streets and roads on the way back from the supermarket to admire their decor. We’re not alone, either, it seems.

By this time last year, according to research, four million British households had already put up decorative lights while a separate survey by garden centre chain Dobbies revealed lights came second only to presents in terms of festive essentials.

Meanwhile, B&Q reported a 36 percent increase in sales of lights, and online marketplace Etsy enjoyed a 247 percent year-on-year rise in searches for garden lights and lanterns in the autumn.

Celebrity gardener David Domoney launched Illumination Street to shine a light on home, school and neighbourhood displays. Sponsored by British Garden Centres, and now in its third year, he has £5,000 worth of prizes up for grabs.

“We’ve already had some spectacular entries this year,” confides David.


Like many social trends, our growing love of outdoor decorations and outshining the neighbours seems to have come from America. Indeed, several major businesses have sprung up across the country offering professional home decorating services at a price. But there’s no need to shell out hundreds or thousands of pounds you can do it all yourself.

And this year, to prove it, my tongue ever so slightly in cheek, I decided to give my own home a festive makeover.

Recruiting my carpenter friend James Roostan (we’re on a hill, so the house is seven or eight metres tall, and he’s adept at working at heights), we set about transforming my very ordinary south London Victorian terrace.

Remember, if I can do it, anyone can!

An extra-wide satin ribbon in fetching Dairy Milk-style purple from The Ribbon Company (£25) is my first purchase. We’ll use it to gift wrap the bay window and create a giant bow.

It should keep things classy, I hope. James fits several wooden batons to the lintels and we attach the ribbon to these using a carpet stapler.

It’ll need to stand up to some winter storms if it’s to last until Twelfth Night. While James is up the ladder (make sure you’re well supported in any ladder work if you’re trying this at home), I fix stickable hooks (£3.90 a packet via Amazon) around the outside of the window frames to support the festive lights.

Using leftover bits of ribbon, we create a giant bow pinned together with an office stapler. The effect is pleasing, even to my grinch-like gaze!

I decide to keep the lights simple, finding two sets of Joomer outdoor icicle effect decorations (£14.99 each) in pure white.

These are possibly the hardest to put up. I find myself hanging precariously out of the sash windows trying to fix them. In the end, despite various mishaps, they’re up. Switched on, the effect is stunning.

To complete our winter illuminations, James attaches another set of white tree lights I already owned around the doorway using cable clips.

I don’t want to overdo it I certainly can’t compete with Jeremy and Mandy Voakes who for the past two decades have deployed 150,000 bulbs to transform their home in the hamlet of Cark-in-Cartmel, Morecambe, in a display so bright it helps the RAF navigate at night but the white lights seem relatively classy and quite discreet.

Taking inspiration from my friend Tanith, who last year turned her home into a gingerbread house, I order hazard marking tape online (£4.93 via Amazon) to create a dazzling candy cane effect on our railings.

We fix them to the wall beside the door using a plastic cable tie attached to a nail. For a more professional look, The Prop Factory on craft website Etsy sells and rents a range of giant versions made out of recycled wood, including candy canes, humbugs and raspberry swirls.

My makeover’s a bit last minute and deliberately amateur but their professional props look brilliant.

Two packets of white felt icicles seem expensive at £12.99 apiece but they create a wintry effect along the bottom of the windowsills, really adding to the Christmassy feel. They’re meant to be hung indoors so I hope they’ll last the season.

A gaggle of primary pupils from a nearby school pass and seem genuinely impressed by our efforts so far, “cooing” and “ahhing” over the candy cane railings and icicles.

I’ve also noticed a couple of passing cars slowing down to get a better look. Perhaps this festive thing isn’t so bad after all?

Four silver foil stars (£5.99 each) hung in the windows complete the bay. I’d ordered some fake snowballs to pile outside on the sills but they didn’t arrive in time.

However, you could make these yourself using cotton wool and wood glue. Today I don’t have time. But maybe next year?

I have to admit, the finished house looks terrific, even though my family wife Susannah ‘come out hello, stop and slow to pictures’ and children Phoebe, ten, and Theo, eight appear slightly embarrassed by the attention.

There’s certainly something quite heartwarming about our efforts. Neighbours come out and say hello, passers-by stop to chat and cars slow so their passengers can take pictures on their phones.

It’s taken James and me several hours to complete and the total cost of the makeover is £138.59 but, when the lights are switched on and the blinds half-drawn, the effect is quite stunning, if I do say so myself.

And now I’ve got the kit, I can do it all again next year for a fraction of the price.

As one of my neighbours smiles: “It’s like living next door to Harrods!”

Wed Dec 8 , 2021
GROVES — Small businesses in Groves and local vendors are gearing up for Christmas on Lincoln. The event is set for 10 a.m. to 4 p.m. Saturday along Lincoln Avenue. There will be shopping, food vendors, family activities, a bounce house and a visit by The Grinch. Juanita Dixon of […] 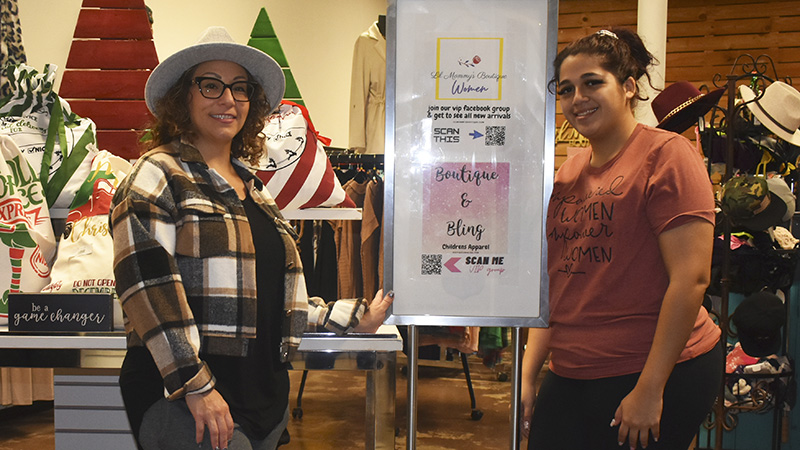