Sometimes it takes a person years to find their passion, but for Adam Bernard, he was only 3 years old when he first took a shine to toy cars, and that interest eventually developed into a career at General Motors. When he’s not working, cars make up a big portion […]

Sometimes it takes a person years to find their passion, but for Adam Bernard, he was only 3 years old when he first took a shine to toy cars, and that interest eventually developed into a career at General Motors. When he’s not working, cars make up a big portion of his free time, too, because Bernard acts as the president of the Detroit region of the Lambda Car Club International — an LGBTQ-specific car enthusiast group. He said that while he was working for GM Design in 2000, it was a “true coincidence” that brought him and his hobby together.

“One of our executives said, ‘We’re sending a concept car to this dinner this weekend and we’d like someone to go and accompany it in case there are any questions.’ I’m like, ‘Sure, I’ll do that,’” Bernard said. “Thursday rolled around and I saw this executive in the hall. I said, ‘Where am I going on Saturday?’ And he says, ‘It’s the Lambda Car Club. It’s a gay car club.’ I had never heard of it before.”

Soon after, Bernard joined up himself and by 2010 he had become president of the group’s Detroit region. Since joining, he said that the club has been a great place for car aficionados from all walks of life to chat about all things automotive while being their authentic LGBTQ selves.

And beyond being an online community of people who like classic vehicles, he said it’s a great resource for those in the market for a new car.

“Say you find a car in Houston on eBay, you can go to the national directory and find people who are in Houston who can go and look at the car in person for you,” Bernard said. “And you can also, from the directory, find people who own the same kind of car and ask, ‘Hey, I’m looking at this, what should I look for?’”

He said that this collaborative approach extends not only from a car shopping perspective but a maintenance one, too.

“You have a wealth of information out there,” he said. “I’m not personally super mechanically inclined, but there are people out there who are. So, if your car has a weird warning light or it’s making a funny noise, you can actually ask people for some informal advice. And people will recommend storage places and mechanics and things like that, so it’s an opportunity to get involved with the hobby and meet people who have different experiences and share their experiences.”

And Lambda is far from an online-only club, Bernard said that members regularly host themed events and fundraisers that draw people from around the region and the U.S. The most notable of these is the Grand Invitational event, which in 2020 was scheduled to be held in the Detroit area. Due to coronavirus pandemic concerns, the event has been rescheduled to 2021, but plans to host it are still in motion.

Bernard joined the group himself with a 1972 Aston Mini in 2000, but he said that owning a classic car is not a requirement for membership.

“You may have just a daily driver and an old American sedan of some sort or a Corvette of some sort. Whatever your passion is, you’ll probably find someone who shares that passion,” Bernard said. “We do lean toward a preference for large American cars, but that’s not all we have. We have some Italian sports cars, we have Mercedes, we have some trucks. So, people ask us, ‘What kind of cars?’ And I say, ‘We have just about everything you could imagine.’”

The 12-foot-tall tall skeleton Home Depot is selling for Halloween, explained by its creator.

Wed Oct 14 , 2020
Photos by Mac Cole, Diego Narvaez, and Alexander Johnson There’s one guy out there who’s having a great 2020. Naturally, he is a giant skeleton. Home Depot’s 12-foot-tall giant skeleton, to be more specific, has become the most coveted Halloween decoration of the season as well as a metaphorically irresistible […] 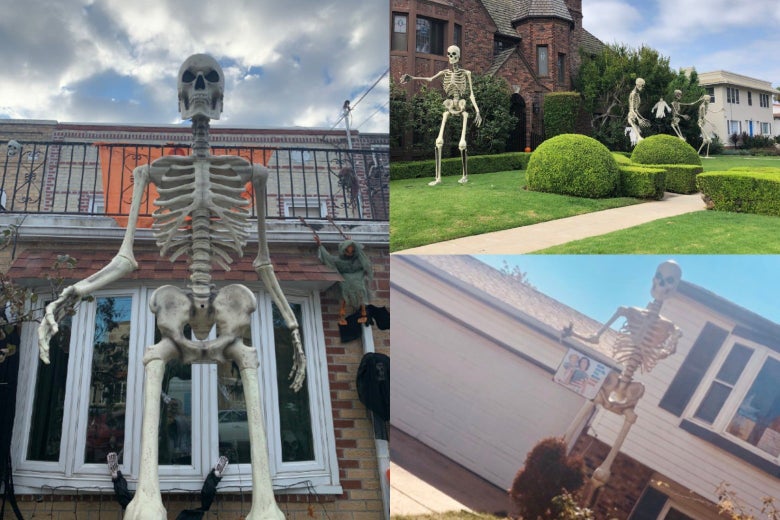