Stores love to sell out of their seasonal items, but there’s such a thing as too soon. Two weeks before Halloween in Dallas-Fort Worth, it’s tough to find a scarecrow on a stick at Michaels, an inflatable jack-o’-lantern at Lowe’s and Walmart or a tombstone to plant in the front […]

Stores love to sell out of their seasonal items, but there’s such a thing as too soon.

Two weeks before Halloween in Dallas-Fort Worth, it’s tough to find a scarecrow on a stick at Michaels, an inflatable jack-o’-lantern at Lowe’s and Walmart or a tombstone to plant in the front yard at Home Depot.

The National Retail Federation had forecast that Halloween-related sales would top a record $10 billion this year, up from $8 billion last year. More than half of the households surveyed said they planned to buy decorations.

Some stores may be missing out on easy sales in a year when consumers are willing to spend. Due to well-publicized supply chain issues, the items they need to restock shelves may not show up until after Halloween.

“Stores are losing out, but they don’t have a choice,” said Venkatesh Shankar, Texas A&M professor of marketing and director of research at the university’s Center for Retailing Studies.

With Halloween falling on a weekend this year and pent-up demand from squashed celebrations last year, this year’s scary season could have fetched well over $11 billion in sales, Shankar said.

Home Depot on Skillman Street in Dallas has already moved its remaining Halloween decorations out of its garden center, where Christmas is now in full view.

Halloween merchandise is in an area at the front of the main store that looks like a clearance section. What’s left is themed doormats, creepy battery-operated animal skeletons and some inflatables that don’t exactly scream traditional Halloween, such as blue 4.5-foot Doodle Monsters and a blow-up Stuart, one of the Minions, dressed as a skeleton.

The decorations were all still offered at full price Monday night, including a 6-foot animated “LED grave warrior” for $179.99 that was “designed exclusively for Home Depot.”

This Halloween experience is a sign of things to come at Thanksgiving and Christmas, Shankar said. “Those holidays will also have shortages and prices will be higher because more people will be celebrating. It is a conundrum.”

Retailers are taking unprecedented steps to keep merchandise in stock for November and December and have prioritized the Christmas season.

Target has built four new sortation centers, including one in each in Dallas and Houston, to move online orders more quickly from stores to customers. Costco and Walmart have chartered container ships and leased several thousand containers to speed deliveries. Walmart has created 20,000 permanent supply chain jobs. Amazon has added 250 locations, from fulfillment centers to delivery stations, in the past year.

For now, there are plenty of artificial Christmas trees available for early shoppers.

Boxes of Christmas trees have already invaded Michaels in the Old Town shopping center on Greenville Avenue in Dallas. Michaels has discounted what’s left of its Halloween decorations at 50% off under a section labeled with a sign that reads “Pretty Scary.”

Irving-based Michaels declined to comment on the status of its Halloween merchandise inventory. Craft stores are usually a destination well ahead of any holiday because customers buy materials to make decorations well ahead of time, but there isn’t much Christmas merchandise out yet.

Walmart still has Halloween inflatables in stock online with a three-day delivery window but not in stores and still at full price.

The At Home store in Mesquite was almost wiped clean of Halloween merchandise and so was the Target down the street, but Christmas decorations were being loaded onto shelves at both stores.

“We’ve worked closely with our product partners to ensure we have the best Halloween assortment in the market,” Plano-based At Home, which went private in July, said in an emailed statement. “Our customers have responded positively, and we are pleased with how it’s selling.”

Shoppers said the selection varied a lot this year and started out smaller.

Monica Kral of Dallas said she shopped several stores for Halloween decorations. She was disappointed with Target’s selection but said she found several items at HomeGoods, At Home and Amazon.

“I stopped in to see if I could pick up one more thing for Halloween,” Kral said as she left At Home on Tuesday with a $13 pumpkin-shaped wooden plaque reading, “There’s always something to be thankful for.”

“It was the last one and can stay up through Thanksgiving,” she said.

Pandemic shopping has taught Kral to shop smarter. “It’s been drilled into us on social media and everywhere to start shopping early,” she said, and her At Home bag included several Christmas items.

So why is there a supply chain problem? It started when the pandemic shut down China’s factories in 2020 and Vietnam’s this year. COVID-19 breakouts created shortages of raw materials.

Then, as consumers were vaccinated earlier this year, demand increased. Retailers worried about getting their goods on time, so they ordered more and earlier, adding to the backlogs.

COVID-19 breakouts also hit the shipping industry and its ports, creating stacked-up cargo ships at the Port of Los Angeles waiting to get unloaded.

Making matters worse, there’s also a shortage of truck drivers to get goods from the ports to stores and distribution centers.

Supply chain issues are going to take a while to sort out, and analysts say they could last into next year or 2023.

Tue Oct 19 , 2021
One of a couple of deals closed by Joyce and Ron Bassin, A Bird in Hand Antiques, was this Grenfell Mission book cover of a wife and husband hunting. The entry for the piece noted that Grenfell book covers are hard to find but that this example “had it all.” […] 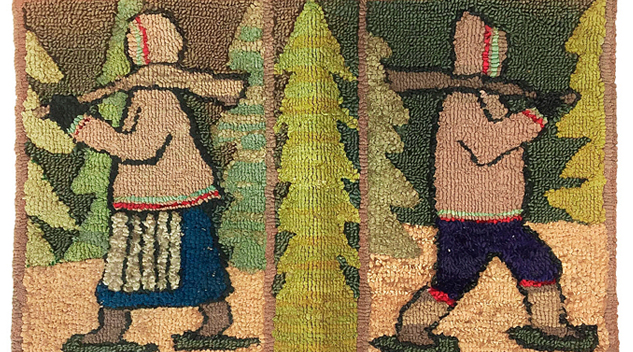