Adam Skyles stood at the entrance to Leodis V. McDaniel High School, clad in a navy shirt bearing the school’s name. As ninth-graders trickled through the parking lot Wednesday morning, Skyles, now entering his third year as principal, made eye contact and greeted them outside the newly remodeled building where […]

As ninth-graders trickled through the parking lot Wednesday morning, Skyles, now entering his third year as principal, made eye contact and greeted them outside the newly remodeled building where many will spend the next four years.

“Welcome to the first day of school,” he said to another.

The youngest students at McDaniel High had the run of the campus for the first two hours of the day. They arrived at 8:30 a.m., took a tour of the building and attended a short orientation on the football field before sophomores, juniors and seniors checked in for first period two hours later.

As a boy in a red hooded sweatshirt approached Skyles, his nostrils visible over a blue surgical mask, the principal pointed at the teenager, pinched his own mask and slid it about a centimeter up the bridge of his nose.

The teen nodded, pulled the face covering up to hide his nostrils and Skyles gave him a thumbs up.

“There ya go. Welcome to school,” Skyles said, striking a jocular tone that hinted at his years as a football coach at the Northeast Portland school.

Similar scenes played out on dozens of campuses Wednesday morning, the first day of classes at Portland Public Schools. Several other districts in rural communities opened for business last week.

And by Sept. 7, most of Oregon’s 580,000 public school students will fill hallways, cafeterias and classrooms across the state for the first time since March of 2020.

Some rural schools returned to full-time in-person learning last spring, but the vast majority of metro area districts taught only a subset of students in-person at any one time and offered most students just a few hours of face-to-face instruction. And many high school students opted to remain in distance learning even when they were offered a hybrid option.

So this fall offers a sea change for most Oregon students.

Some small districts, however, have pushed their start date as teachers and, in some cases, students, quarantine due to a spike in COVID-19 cases in Tillamook and Douglas counties.

Although statewide case rates have shot up among school-aged children since July, they vary widely from place to place and Multnomah County’s most recent case rate among residents 17 and younger was one of the lowest in the state: 109 per 100,000. In Jackson County, by contrast, the new cases among young people, from Aug. 15 through Aug. 21, was seven times that high.

Fears of an outbreak at school kept sophomore Opal Green home when McDaniel High opened for hybrid instruction in mid-April. She showed up for class Wednesday morning, masked up and with her head buried in a paperback copy of “Perfume: The Story of a Murderer” by Patrick Süskind.

The 15-year-old felt wary but more secure being among her classmates now that she’s vaccinated. Still, Green said she’d grown tired of interacting with her peers and teachers exclusively through a screen for the last 18 months.

“It was really difficult to get anything done,” Green said.

Damari Clark and Alluwha Castro were among the first students to arrive at McDaniel Wednesday morning.

Both said they were looking forward to being among a large group of students again after half of their time in middle school was spent learning virtually.

“I want to collaborate,” Castro said. “The idea of seeing everyone after a year of just being at home is a great feeling.”

Clark and Castro said they didn’t learn much over the year-and-a-half they did their schoolwork online. But as Castro stood atop a rock near the entrance to McDaniel, he said part of his disinterest in academics stemmed from the lack of interesting options he had at Bridges.

He wants to take finance classes at McDaniel so he can learn how to make enough money to invest in real estate.

“I want that passive income, the monthly cash flow,” Castro said. “That’s how you become a millionaire.”

The boys shuffled into the building shortly before 8:30 a.m. Around then, Don Newcomb pulled up in a black minivan to usher his daughter Donna out of the car and toward the school.

Don took a few first-day photos of Donna in front of the building before pulling a small wooden box out of her backpack to show off for the journalists on campus.

One by one, he pulled bright gems wrapped elaborately in thin wires from the container.

“Check these out,” Don said. “Look at this jewelry.”

As Donna retrieved the pieces from her father and stuffed the box back into her bag, she said she planned on handing some of them out to her friends.

The younger Newcomb was among the last in her grade to arrive at McDaniel Wednesday. She and her classmates began the morning with a dry run of their fall schedule, visiting each classroom briefly to get a feeling for what their day-to-day will look like for the next 10 weeks.

After that, the first-year students filed onto the bleachers next to the athletic fields, where Skyles welcomed them to their new school. The class of 2025 at McDaniel is 431 strong this year, Skyles said.

Like other Portland principals who presided over the opening of a newly renovated school, Skyles expected a bump in enrollment from families eager to send their children to a gleaming remade building, with more natural lighting and new performance spaces and athletic fields.

He also heard from parents who had previously sent their children to Jefferson High or a charter school while McDaniel was under construction, opting to forgo the two years students spent at a spillover campus in Southeast Portland.

Darius Smith, 17, is one of the hundreds of seniors who spent his freshman year at McDaniel, back when it was still known as Madison High, prior to the remodel — then the first six months of the 2019-20 school year at the Marshall campus before learning remotely once the pandemic hit.

Smith took a brief tour of the building last week and, like at least a half dozen other students who spoke to The Oregonian/OregonLive Wednesday, said it felt a little like walking through an office.

“I kind of miss the old building,” Smith said. “It lost a lot of its personality.”

Skyles said he and other staff haven’t had time to put up some of the banners and other decorations that usually fill the school’s hallways. It’s also been about six months since the McDaniel community settled on the school’s new namesake and even less time since stakeholders chose the mountain lion as a mascot.

It’ll take some time before the school has new signage and decorations to match its new identity. But once that happens, Skyles expects the school will have a character of its own.

Eder is The Oregonian’s education reporter. Do you have a tip about Portland Public Schools? Email [email protected].

How Video Games Can Level Up Kids’ Money Skills

Thu Sep 2 , 2021
September 2, 2021 6 min read This story originally appeared on NerdWallet Every few days, my 8-year-old son, Neal, asks if he can “earn something” on Roblox, a popular online video game platform. That’s his way of suggesting I buy him Robux, the platform’s currency, in exchange for him doing […] 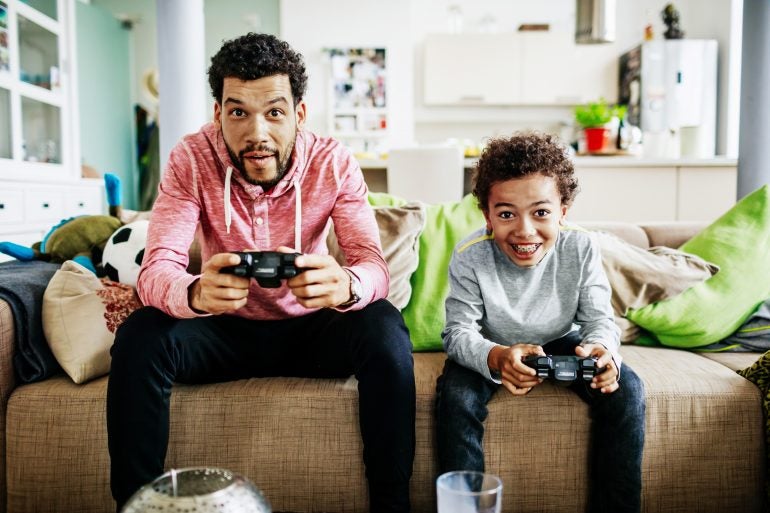