Birkenstock has once again found itself at the forefront of the marketplace — and the center of the zeitgeist. Speaking with FN by phone from the company’s headquarters in Cologne, Germany, earlier this month, Birkenstock Group co-CEO Oliver Reichert wasn’t exaggerating when he described the brand as the “official home-office […]

Birkenstock has once again found itself at the forefront of the marketplace — and the center of the zeitgeist.

Speaking with FN by phone from the company’s headquarters in Cologne, Germany, earlier this month, Birkenstock Group co-CEO Oliver Reichert wasn’t exaggerating when he described the brand as the “official home-office shoe.”

Since the global coronavirus pandemic began to take hold in Europe and the U.S., consumers have been living and working primarily at home, causing an abrupt shift in their wardrobe needs and shopping habits. “What have we seen as people stay home: They are buying exercising materials, like dumbbells and an electronic bike, because they want to stay fit,” said Reichert. “And on the other hand, they start buying quality-driven materials and quality-driven shoes. It has increased the number of Birkenstock fans globally.”

Indeed, fashion search platform Lyst reported that the Birkenstock Arizona was the most-searched shoe in the world during the second quarter of this year, with a 225% increase in online queries and many retailers selling out of the two-strap slide.

David Kahan, president of Birkenstock Americas, told FN in May that some of the credit goes to (unpaid) celebrities like Reese Witherspoon, Jason Momoa and even Kanye West, who posted photos of themselves wearing the sandal during lockdowns.

But this is more than a celebrity style trend — it could be the start of a comfort fashion revolution. Yes, another one.

Since the late 1800s, when master cobbler Konrad Birkenstock began making molded insoles, the German company has been synonymous with wellness — even hosting training courses on podiatry in the 1930s. When Margot Fraser brought the brand to the U.S. in 1966, she could only convince health-food stores to carry the shoes, thus cementing the brand’s persistent “granola” associations.

But through the decades, Birkenstock and the fashion world have found common ground numerous times. In 1990, there was the iconic photo shoot for The Face, featuring a then-unknown 16-year-old Kate Moss looking carefree in her Arizonas and Mayaris.

Then in 2012, Phoebe Philo sent fur-lined sandals down the runway for Celine and suddenly a spark ignited, as designers and stylists embraced the richness of contrasts.

It was in 2012 that Reichert joined the company, and he, along with co-CEO Markus Bensberg, are credited with modernizing the family-owned company and building ties to the design world.

In recent years, it has collaborated with Rick Owens, Stussy, Kith and Valentino, among many others, and Manolo Blahnik and his niece, CEO Kristina Blahnik, are now appearing in a campaign for the brand. “Ask yourself, how is it possible that ‘Mr. High Heel’ himself is doing a shoot with us?” said Reichert.

Below, the executive shares how the brand is navigating through 2020’s uncharted waters and building true staying power.

There has been a lot of buzz around the brand, but how has that translated in terms of the numbers?

Oliver Reichert: “We’re actually very lucky. In terms of our total revenue, we will surpass last year. Because of the shutdown, we will be a bit under last year’s results in regard to EBIT. We shut down our production facilities for nearly two months. But in the end, globally, we will have reached the same figures in 10 months as in 12 months last year, which shows we are still growing very fast, by two-digit percentages every year. So we’re very healthy. (Birkenstock’s fiscal year ends in September.) The team and I were sitting together at the end of February, beginning of March as we planned the downside, starting from [decreases of] 20% to 40%. In February, everybody was more or less driven out of fear — you didn’t know what would happen. How long will the shutdown be? We were worried about the leather qualities and our whole supply chain. It was really a big threat for the company. But in the end, Birkenstock proved again that we’re bullet-proof.”

How did you weather the uncertainty?

OR: “We were calm and ready, but a bit of fear was in our hearts as well. But we did a great job all over the world. In some areas, it was quite tough to reach the goals. But in the end, the brand showed up as the ‘official home-office shoe’ worldwide. It was a huge push for us as a lifestyle brand. It’s more than a shoe; it’s a way of thinking, a way of living in times of insecurity. When there are many things questioned, people turn to quality.”

What were some of the major obstacles you faced this year?

OR: “The biggest challenge was the production. It’s really tough to foresee the risks for your own business if your supply chain is about to collapse. We are pretty strange in this respect because we don’t play in the global supply chain. We source all our goods from nearby: The leather is coming from Italy, the cork is coming from Portugal. We have a lot of the supply chain in our own hands, so [we only rely on] a few people. But that’s also what worried us most at the beginning of the situation in Italy. Because if we don’t get any leather out of Italy, for whatever reason, then we are in big, big trouble. This was a major concern for us.”

As a result, did you make any adjustments to your supply chain?

OR: “Yes, we [started to] buy everything. We’re not like those…financial advisers, who say, ‘Don’t put too much money into the product.’ We had 11 million pairs in the warehouse and all the summer styles were already in the market. Nevertheless, we were buying like hell every piece of leather we can get. So we’re spending all the money. Everybody was worrying about cash flow, and I said, ‘OK, if the cash needs to flow, you need to release it.’ This was a big decision.”

Prior to the pandemic, there was already a surge in popularity for Birkenstock. What fueled it?

OR: “When I joined in 2012, I pushed every single button and changed everything to get momentum to the brand. It fits in the zeitgeist, in the global green awakening. It’s more than [a brand]; it’s rather like a religion. But this energy had to be released. You need to invite creative people to the brand. You need to share that idea of doing something bigger than just selling a shoe. From time to time in the past, Birkenstock came up like a whale to the surface to say, ‘Here we are,’ and everyone in the fashion industry remembers, ‘Oh, Birkenstock, it’s a nice shoe, it’s very comfortable.’ Then we disappeared again. So keeping it relevant, at full strength and in full variety, that’s the major thing we did.”

The Arizona has been particularly popular in recent years. How much of the business comes from that style?

OR: “I would say it’s around 12 million pairs every year. It performs equally well in every market, and it’s unisex, which is even more surprising. We can more or less evaluate the split between women and men if we look at the size range. But to be honest, if you sell a tobacco oiled-leather Arizona in a size 39, it could be a guy [with a smaller foot], it could be a 10-year-old boy, it could be a girl, it could be anyone. The target group is huge, from 10 years to 100. It’s the full range of people.”

What is your favorite Arizona version?

Looking ahead, how are you positioning Birkenstock for the future?

OR: “In the middle of the people’s hearts. That’s the simple answer. Because we have such a huge range of product in every price point. And our mission is to give the footbed to everybody. The upper material is also important, but the people need to get in touch with the footbed. We will jump over a billion in total revenue, possibly in the next year or the next two years.”

OR: “We’re busy right now with the sleeping systems and the natural skincare, which is a big business globally. We are trying to find the right partners to join us and to let it grow. But on the other hand, if you have a strong business, you need to relax and just enjoy the moment. We don’t have any pressure on anything, which is a big gift, because we can decide what we want to do. We are in a place finance-wise to do whatever we believe in.”

Tory Burch is having a major fall savings event on bags, boots and more 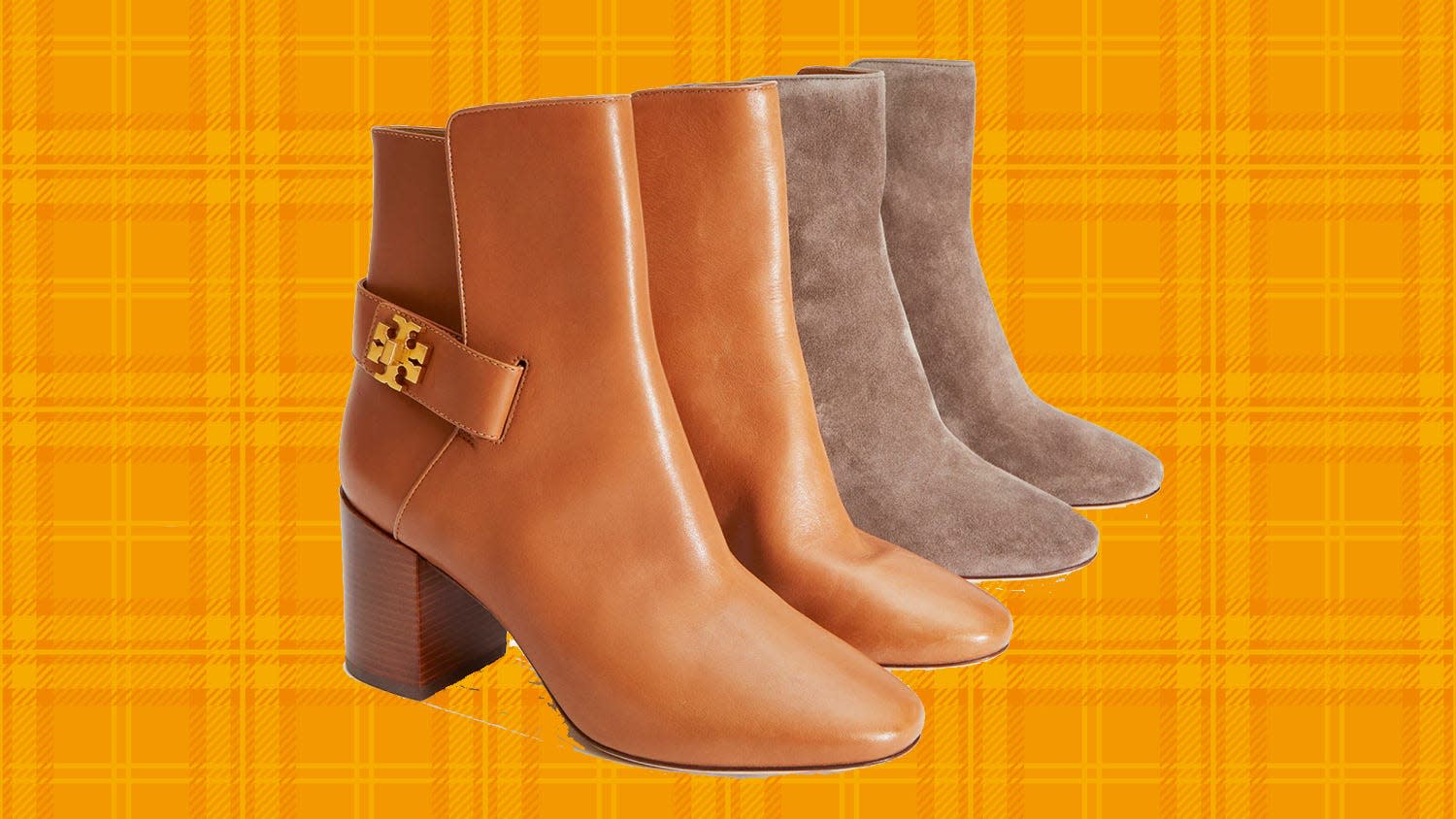