Retail forecasters are calling for record Halloween sales this year as consumers try to leave covid-19 fears behind. But the pandemic’s effect on the supply chain means finding just the right costume or fright prop might be a challenge for some this year. The National Retail Federation’s annual survey projects […]

Retail forecasters are calling for record Halloween sales this year as consumers try to leave covid-19 fears behind.

But the pandemic’s effect on the supply chain means finding just the right costume or fright prop might be a challenge for some this year.

The National Retail Federation’s annual survey projects Halloween sales of $10.14 billion, a record and a large jump when compared with $8.05 billion in 2020. Sales last year slumped when covid-19 curtailed traditional Halloween activities like parties and trick-or-treating and made consumers fearful about the future.

The retail group said Halloween celebration plans this year will increase compared with last year and are close to pre-pandemic levels. About 65% of Americans plan to celebrate Halloween in some form or fashion, up from 58% last year and close to 68% in 2019 before covid-19 disrupted the country.

Average consumer spending on the holiday is also on the rise, up $10 to $102.74 per person for costumes, candy, decorations and even greeting cards. Households with children are expected to spend nearly $150 on the holiday, twice as much on average as households without children, according to the study by Prosper Insights &. Analytics.

Angela Lemke, who has operated her Halloween Express in Rogers since 2007, said people visiting her store in the Dixieland Mall are interested in celebrating the holiday but this year getting them what they want and need is a challenge because of supply-chain constraints.

She said in her store obtaining some key items and restocking has been challenging because of supply-chain disruptions. People who might have waited to make a purchase in years past are snatching up items, she said.

Dinesh Gauri, professor of marketing, Walmart Chair in Marketing and executive director of Retail Information at Sam M. Walton College of Business at University of Arkansas, Fayetteville, said Halloween sales will likely see a significant increase when compared with the 2020 drop-off. He noted there’s expected to be pent-up demand, with children and families wanting to trick-or-treat and the delta variant of covid-19 in a downward trajectory in many parts of the nation, easing some fears.

He said supply issues could hamper Halloween sales and sales into the Christmas season. He predicted traditional late season sales will likely be scarcer this year.

“Consumers will be better off buying as early as possible,” he said. “… Finding a good deal will be harder the later you get.”

In its 2021 Halloween Insights Guide, Inmar Intelligence, a data and tech-enabled services company, notes that online searches for Halloween costumes, party supplies and decor began to climb in August. About 28% of women and 34% of men start Halloween shopping in September, while 6% of both men and women start shopping before then. The first two weeks of October sees 42% of both men and women starting their shopping with 24% of women and 18% of men waiting for the last two weeks of the month to begin.

Leah Logan, vice president of social commerce for Inmar Brand Solutions, said about 50% of people this year plan to trick-or-treat, up from just 27% during Halloween 2020. She said 53% of consumers planned to buy decorations this year, continuing an upward trend. She said the issues surrounding the covid-19 pandemic last year demanded more outdoor activities and adult participation that will likely continue to become part of Halloween traditions going forward.

“People want to make up for that lost time,” she said.

David Mendelsohn, Spirit Halloween consignment operator for Arkansas and Tennessee, said sales have been brisk at the company’s store in the Northwest Arkansas Mall in Fayetteville. Spirit Halloween has seven stores scattered around the state, he said.

Mendelsohn said Spirit Halloween has had its challenges through all aspects of the supply chain, like pretty much every retailer in the nation this year, but the company planned as best it could and its stores are stocked.

He noted the pandemic’s impact on pop culture, from films to movies to video games, is evident this year through the lack of must-have costumes. He said the classic costumes are back, throwback characters are big and strangely enough, food costumes are gaining traction.

Lemke from Halloween Express agreed the classics are back and added some recent, pop-culture favorites seem to have run their course.

“I’ve only had one person ask about Harley Quinn this year,” she said.

She noted group costumes are popular, like going as the Scooby-Doo gang or the characters from “The Flintstones.” She said Marvel heroes are still selling as in Disney’s “Cruella.”

“Witches, skeletons, werewolves and ghosts are big and they’re available,” she said. 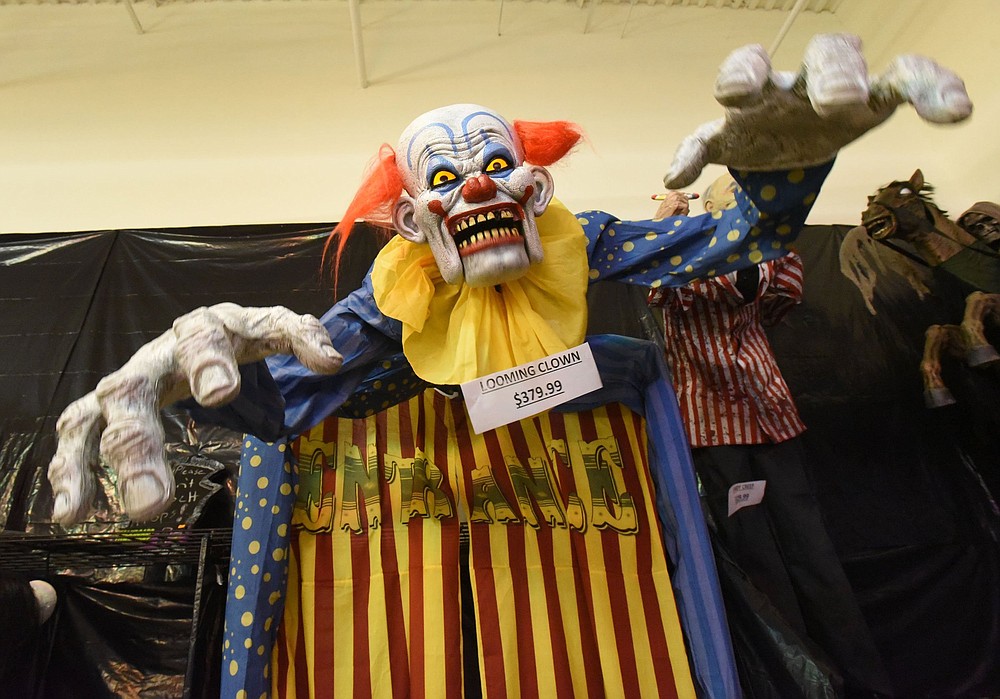 A frightening clown, seen Wednesday Oct. 6 2021 at Halloween Express, can be placed above a doorway. Go to nwaonline.com/211010Daily/ to see more photos.
(NWA Democrat-Gazette/Flip Putthoff)

OUTLOOK: October events provide plenty to do in Vicksburg - The Vicksburg Post 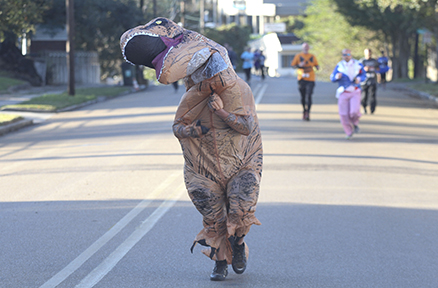