Oct. 25—MANKATO — Katie Resch’s job prompts her to make some odd remarks. “These are the best teeth we have by far,” Resch said to a woman buying a werewolf costume. “She just said it was a killer clown, and I told her I needed more info than that,” she […]

“These are the best teeth we have by far,” Resch said to a woman buying a werewolf costume.

“She just said it was a killer clown, and I told her I needed more info than that,” she said casually to one of her employees, who was trying to resolve a customer inquiry about costume inventory.

As the regional manager at locally owned Halloween Express, which this year debuted a new 15,000 square foot location at 1400 Madison Avenue, Resch was so busy Sunday afternoon she hardly had time to stop and talk.

Quick to solve problems after a decade managing the business, she jumped back and forth between an interview and finishing sales at the cash register.

“There’s four of us on, but I am the only cashier unfortunately today,” Resch said. “It’s harder to find help this year with everything going on.

“It makes for a really fun job, though. The employees all get a discount, they get a free costume.”

The vast majority of the store’s sales happen in the two weeks leading up to Oct. 31. Resch said she works 80-90 hours a week throughout much of the month until the store closes for the season on Nov. 2.

Though she couldn’t disclose how many sales dollars her business brings in, the manager estimates that the number of customers visiting in the second half of October is in the thousands.

American consumers are expected to spend a record $10.14 billion for Halloween this year, a $2 billion increase from the pandemic-suppressed 2020 holiday, the National Retail Federation projects.

Resch ordered more goods this year because of the pent-up demand for costumes and decorations.

“There’s just a lot of reasons that people weren’t dressing up last year, and this year, now that everything’s kind of — a little bit — more back to normal, there’s a lot more people wanting to buy costumes.”

The new Halloween Express location, one of five in Minnesota, opened the first week of September this year. Costumes and decorations are now sold in a large warehouse next to Joann Fabrics and Craft following several years in which the retailer operated from the former Mexican Village building.

The business has traded a tightly packed, spunky design for an amount of space conducive to social distancing and convenient browsing, she said. The new setup is ideal for the boost in visitors Resch has observed.

Placing orders for new costumes, her favorite part of the gig, requires retailers to stay aware of trends among children. Cowboy hats were unusually strong sellers last year because of a TikTok trend, she said.

Popular items this year are the Michael Myers costume, given the newly released “Halloween Kills” movie; the Scream mask, ahead of a new version’s debut in January 2022; and, predictably, a plague doctor mask and overcoat.

Because consumer tastes change with each year’s movies and online trends, she likes to hire workers who enjoy Halloween and the pop culture surrounding it.

“Most of the employees that work here this year are Halloween lovers,” she added. “They’re a lot younger so they’re really enthusiastic about it, which is amazing. You kind of lose your enthusiasm the older you get, I feel.”

While stores like hers drive the energy of Halloween, she concedes that centering her job on the holiday has changed her view of it.

“I love Halloween, but working 90 hours a week you don’t get to enjoy it as much as you would have before,” she said.

“No,” Resch was quick to add, “it’s actually really fun to see everyone coming through with smiling faces and the kids that are super excited to be a cat for Halloween.”

Brynn Lundy, a first year student at Minnesota State University, was one of three employees working alongside Resch Sunday. Part of her role is to stand near a table by the store’s fitting rooms and remove costumes from their cases so customers can try them on.

Hired in early October, this is her first year working at any Halloween store. She’ll work about 10 hours a week until Nov. 2 and then find a different job, she said.

“I needed a job and they were guaranteed to hire me right away,” Lundy said of Halloween Express.

She likes the holiday, she said, but part of what makes this role more interesting than others is that she gets to watch people walk out of fitting rooms dressed like Ninja Turtles or square-headed Minecraft characters.

At least 50 people were in the store at any given moment Sunday afternoon.

One customer, 14-year-old Spencer Schlong, said he hasn’t dressed up for Halloween in the past couple of years. But on Sunday, the Mankato East freshman was holding a costume handpicked by his younger brother Easton, who is 5.

“He wanted me to dress up with him. It’s Jason,” Spencer said, referencing the villain of the “Friday the 13th” horror franchise. Easton and Kaci, his 2-year-old sister, are dressing up as two kids from “The Incredibles.”

To him, “Friday the 13th” is “scary but it’s not that scary.” He has friends who like horror movies, so the only person he intends to scare while trick-or-treating is his sister.

Held up at nation’s shipping ports: Thousands of ugly Christmas sweaters and other yuletide paraphernalia

Mon Oct 25 , 2021
Demand is driving optimism this year but kinks in the supply chain, including bottlenecks along various points in the transportation system, could cut into supply. We’re hearing talk about potential shortages of toys, trees and, yes, maybe even holiday sweaters. Where’s Jay and Silent Bob? The ugly sweater story is […] 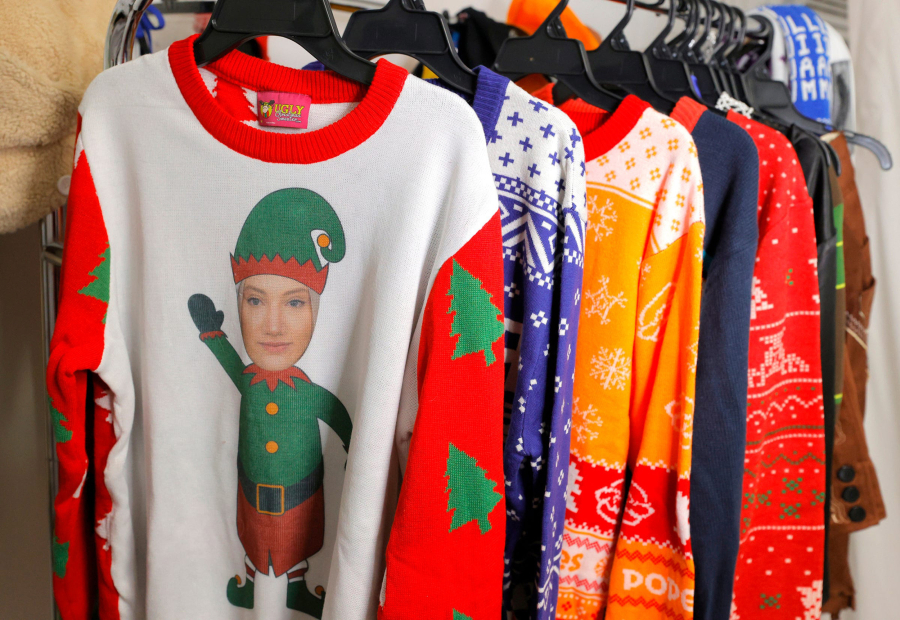