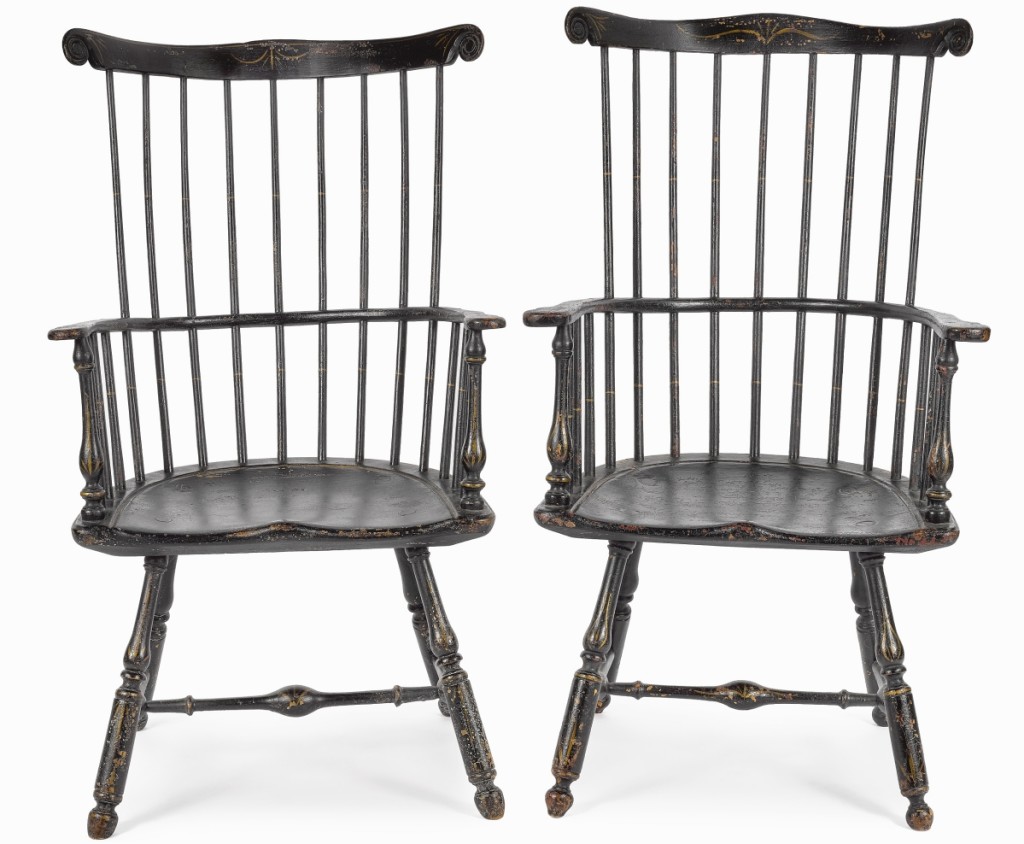 The sale’s top lot was found in this near pair of Eighteenth Century Philadelphia Windsor armchairs at $79,300. “The key there was that it was an almost pair, which is sort of unheard of in the Windsor chair market,” auctioneer Jamie Shearer said. The belief is that they were made for a husband and wife.

DOWNINGTOWN, PENN. – Case goods, from wardrobes to chests and cupboards to case clocks, featured quite strong at Pook & Pook, Inc.’s January 28-29 Americana and International sale. Over two days, the auction unloaded 707 lots of fine and decorative arts to an audience that participated live via absentee, phone and online bidding only. The sale went 98 percent sold and topped $1.8 million in total.

When it comes to case pieces, the question for many buyers usually comes down to space, the common question leading any conversation amounting to “where will we put it?” It takes a “we’ll make room for it” sort of buyer to buoy prices for case goods at auction, and Pook seemingly had quite a few of them.

“It’s about the bells and whistles,” auctioneer Jamie Shearer said. “Great paint, great surface, great size. Put great in front of anything and it did very, very well. There were plenty of surprises and things we had hoped would do well, and they did that and then some. The sale was very strong.”

The far and away star of the category was an Ohio Mennonite painted poplar Dutch cupboard that surpassed its $8,000 high estimate to go out for $43,920 to a buyer new to the auction house. The Nineteenth Century example retained its original vibrant red surface and featured provenance to Ellie Hoover Walker and Allan Katz. If that was the fire, then a circa 1800 Dutch cupboard from Pennsylvania with a blue surface was its natural counterpart, and it went out for $18,300. It had come from the estate of the late Ronald Wise, a designer, architect, builder, artist and antique dealer from Myerstown, Penn. Meeting somewhat in the middle was a Mennonite wardrobe dated 1846 that contrasted a warm ochre varnished surface with green moldings. To the top was a painted inscription for Elisabeth Hofstetter, presumably for whom it was made. It sold for $17,080. 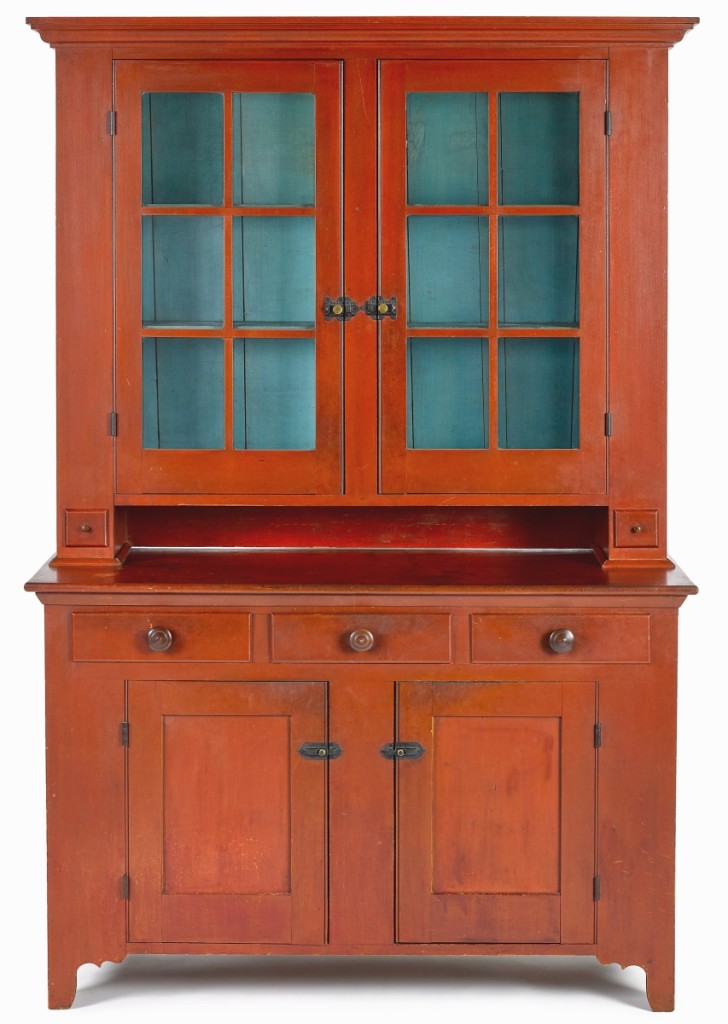 The second highest lot in the sale was this Ohio Mennonite painted poplar Dutch cupboard that brought $43,920. In a vibrant red, past handlers included Ellie Hoover Walker and Allan Katz.

Case clocks made a number of appearances throughout both days. On the first we saw a Delaware Chippendale walnut tall case clock with a broken arch bonnet go out at $11,590. The brass face was signed “Jas. Kinkead Christiana Bridge.” James Kinkead worked in Philadelphia and Chester County from 1760 to 1774 and Christiana Bridge from 1774 onward. A clock with a similar case by Kinkead is in the collection of Biggs Museum of American Art. A cherry tall case clock from Lancaster, Penn., with a broken arch bonnet with carved rosettes and a potted flower inlay went out at $9,760. The works with painted face was signed for Martin Shreiner.

“We had quite a few consignors on the clocks,” Shearer said. “The clock market has been depressed lately, but it really showed a resurgence here. Clocks that I thought would bring $8,000 brought $15,000 to $20,000. We had a handful of new buyers and some established people. The clock market really surprised me.”

As many of the clocks came from Pennsylvania, we asked Shearer if they stayed in the state.

“Regional buying, while it still plays for some people,” he said, “we’re seeing more that people are less concerned with it. They are buying on the merits of what it is rather than where it is from. A great clock is a great clock no matter where it’s from.” 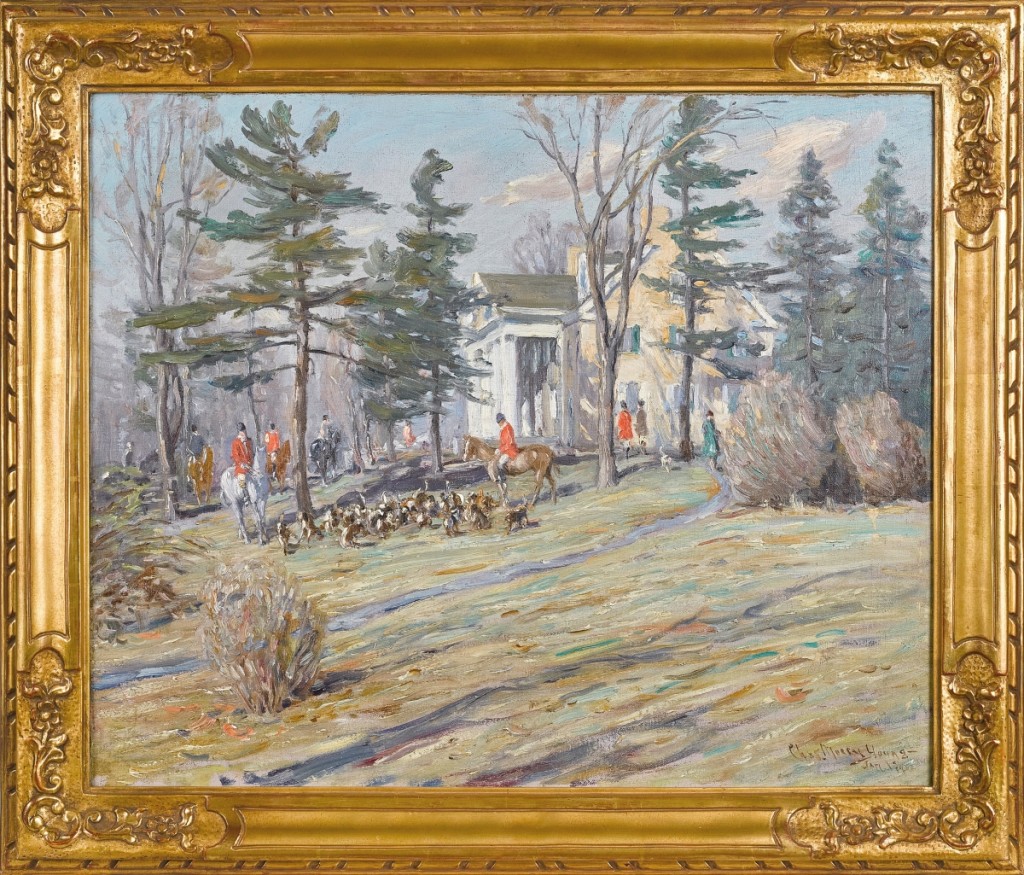 The sale’s leader in fine art came with Charles Morris Young’s (American, 1869-1964) fox hunting scene at the Marshall estate in Huntington Valley, Penn., which brought $31,720. Two years before he died in 1964, Young’s home burned down with 300 of his finest paintings inside.

The second day of sale saw the category’s leader in a Philadelphia Chippendale walnut tall case clock, circa 1770, with eight-day works inscribed for Philadelphia maker Edward Duffield. It brought $24,400. Duffield was a friend of Benjamin Franklin, who owned at least two of his clocks. In the late 1740s, Duffield placed a two-faced timepiece outside the second story window of his shop at the northwest corner of Second and Arch Streets, which is said to be the first public clock in Philadelphia. Behind at $20,740 was a Philadelphia Queen Anne walnut tall case clock, circa 1745, the eight-day movement with a brass face signed for John Wood. Of note on this was the sarcophagus bonnet and blind fretwork. Finally, at $18,300 was a New York Federal mahogany clock with a pagoda top and eagle inlay, the eight day works enclosed and signed for New York City maker Effingham Embree.

The sale’s top lot was made by a near pair of Eighteenth Century Philadelphia Windsor chairs that made $79,300. They were consigned from a collection local to the auction house and sold to a New Jersey collector. “The key there was that it was an almost pair, which is sort of unheard of in the Windsor chair market,” Shearer said. The two examples differed only slightly in size, the assumption being they were made for a husband and wife. A similar chair was illustrated in Santore’s Windsor Style in America. The duo featured a late Nineteenth Century black surface with gilt highlighting.

Fine art was led by two works: a fox hunting scene by Charles Morris Young, $31,720, and a landscape by George “Frolic” Weymouth, $30,500. Young (American, 1869-1964) centered his 20-by-24-inch oil on canvas painting on the Marshall estate of Huntington Valley, Penn. Painted in 1932, the scene was done the same year that Young represented the United States in the Los Angeles Olympics with six submissions, among them “Huntsmen and the Hounds,” a scene with similar imagery. Weymouth’s 22-by-28-inch tempera on board featured Big Bend in Chadds Ford, Penn., where the artist spent much of his life. Bidders took a liking to a James Pollard’s (British, 1792-1867) oil on canvas painting, which went out at $21,960. It featured the Manchester Independent mail carriage pulled by four horses with 11 people riding atop outside and two seen inside. Rising to $13,420 above a $1,200 high estimate was a Southern Black painting signed “Mercy, 1867.” The 12-by-18-inch work was titled “Negroes leaving home ___ of the rebellion South Carolina 1864″ and seemingly featured Black men waving goodbye to their home as they boarded a rowboat and set sail down a river with a setting sun in the distance. 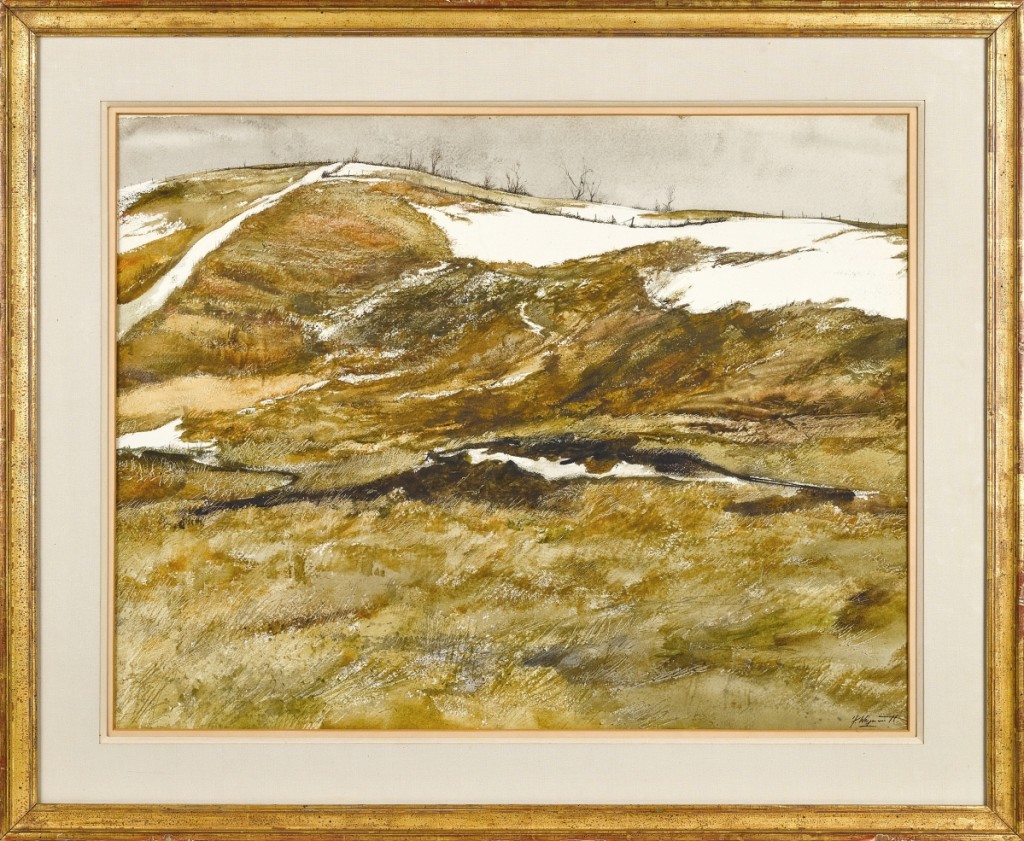 George “Frolic” Weymouth (1936-2016) painted this scene of his homeland, Big Bend in Chadds Ford, Penn. The tempera on board went on to produce $30,500 for the artist, who passed away only four years ago.

Carved pieces were desirable, including a $24,400 result for a New England chip carved pine wall box with lollipop back and initialed to the front “WA.” Others included a Wilhelm Schimmel spaniel measuring only 2½ inches high that brought $9,760.

Other ceramics were hot, including a $12,200 result for a Haegerstown, Md., redware bowl attributed to Henry Adam (1782-1819). From a Maryland collection, it featured cream and green wavy bands around an inner band of dripped manganese and cream slip and measured 10¼ inches diameter. It sold to a Maryland collector.

“It was a great example,” Shearer said. “There are a lot of people who think Adam is the best redware maker in the country. It was in great condition and so graphic.”

From Philadelphia maker Edward Duffield was this Chippendale walnut tall case clock dating to circa 1770. It was among the highest results for tall case clocks, a number of which rose above the $10,000 mark. This one brought $24,400.

Globes found two leaders in different mediums. Newton’s terrestrial pocket globe, circa 1818 and 2 inches diameter, went out at $7,930. It came in a shagreen case lined with a celestial map. Rising to $5,612 was an embroidered globe from the Chester County, Penn., Westtown School, from the early Nineteenth Century. This 4½-inch diameter example was done by Ann Thompson Jarrett, who attended the school in 1807. According to a 2019 The Magazine Antiques article by Robert Peck, 42 Westtown globes are known, the products of the school’s curriculum in both embroidery and geography. It sold to a New York state buyer.

A Westtown school silk on linen sampler also did quite well in the sale as it sold for $21,960. This had a different consignor from the globe and it sold to the trade. The sampler featured a starry sky and view of the Westtown school, dated 1812.

“We continue to set the standard in American folk art and painted country furniture,” Shearer said. “There’s more on the horizon. We’ll have a really nice group coming in for late spring.”

All prices include the buyer’s premium. For more information, 610-269-4040 or www.pookandpook.com.

Wed Feb 10 , 2021
The 1948 charcoal and pencil on paper drawing “Christmas Homecoming, 1948” by Norman Rockwell was $1.1 million at Jonathan Boos, New York City. It is preliminary to a painting of the same name, now at the Norman Rockwell Museum and published on the cover of The Saturday Evening Post on […] 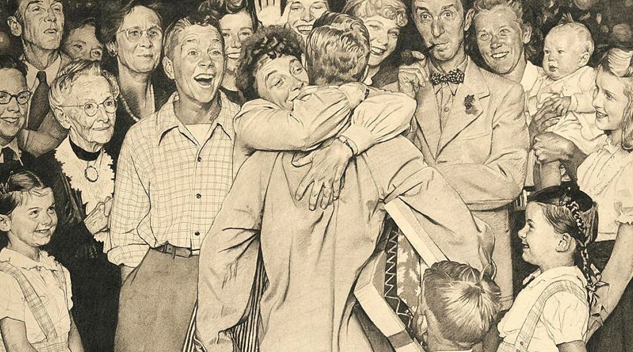