It’s 2009 and you’ve legged it home from school. You change out of your uniform into black skinny jeans and a band hoodie before heading straight to the Computer Room. Your mum thinks you’re “doing homework,” but instead you’re balancing a complex virtual ecosystem, a paradise filled with rows of disproportionately sized crops and multicoloured cows. Welcome to FarmVille.

In case you’ve forgotten, FarmVille was a browser-based game accessible via Facebook that was hot shit from around 2009 – when it launched – to around 2011. The game had a simple premise: you’d create a farm, plant crops and raise animals. The more products you harvested, the more “Farm Coins” you would earn to once again repeat the dopamine-inducing cycle, this time with an extra cow. Everything happened in real-time, earning FarmVille a reputation for being mindless and repetitive, but also weirdly addictive.

Like all good pyramid schemes, the easiest way to make money was to manipulate people you vaguely knew from school into joining. Once they’d accepted your invitation, you’d be neighbours and could harvest and fertilise each other’s crops for cash. Of course, if you had spare cash in real life, you could sack off the hard work and convert your real money into Farm Coins (Zynga – the company behind FarmVille – raked in over £223 million in 2009 based on this tactic alone.) In 2010, one 12-year-old boy notoriously even ran up a debt of £900 without his mum’s knowledge. By then, the game had over 80 million players a month (more than Twitter at the time).

Holland, now 27, was so committed to the grind that he played FarmVille at school in between and sometimes during lessons. “I had responsibilities. My crops needed to be watered and harvested,” he explains. “One day, I got called to the office for a special meeting and it was my parents, teachers and principals. They told me I had a problem and I needed to meet with the school counsellor about my digital addiction.”

Lydia, 23, says she became part of the FarmVille universe after being convinced by her friends. “All my primary school friends were rejuvenating their crops after school, and where was I? Somewhere else, being less ‘with it’. Armed with your average case of pubescent FOMO, I joined.”

While plenty of people were briefly obsessed with the game, the FarmVille dream died as quickly as it began. Since its peak in 2010, Zynga’s farming empire has been steadily declining. Bugs, long loading times and a lack of anything to actually do in the long term meant people left the FarmVille universe in their droves.

The game plummeted from Facebook’s most popular game in 2010 to the 116th most popular in 2016. Presumably as a result of this, as well the phasing out of Adobe Flash Player, FarmVille will end on the 31st of December this year. It joins Topshop as the latest casualty unable to replicate its late noughties’ success. There’s a petition to save the game on Change.org, but at the time of writing, it has only only 2,019 signatures.

Despite many viewing the game as a relic, a community of hardcore FarmVille fans remain. Linda, 58, from Washington, has been playing the game since its inception and finds it a welcome distraction from the realities of everyday life. “I am a homebound disabled person and FarmVille has been a way for me to ‘escape’ the pain I find myself consumed by, focus my mind on something that keeps me occupied and have something to be proud of,” she says.

Using virtual hay bales, Linda also creates elaborate FarmVille art – including pictures of flowers, cats and a portrait of Elvis. Her art has won various decoration competitions organised by FarmVille to celebrate Christmas, Thanksgiving and other holidays. A cake she designed for the game’s tenth birthday impressed Zynga so much that they turned it into an in-game reward that players could win.

Josephine, 74 and from Belfast, has a farm that’s just as complex. Her son, Alex, 31, tells me that she’s spent the past ten years or so playing FarmVille. “She’s built this monolith of a farm,” he says. “God, there’s no space on the screen with all the wee things. It’s a constant arms race for me to try and build a computer that’s powerful enough to actually load it.”

Like Linda, Josephine relies on FarmVille as a method of escapism and source of comfort during difficult times. “It got her through a few rough times in her life because it gave her something to do. It gave her a hobby,” says Alex.

The FarmVille community thrives because in some ways, it has become a social network in its own right. To begin with, players could only add Facebook friends as neighbours, but this feature was later upgraded to include anyone on Facebook – meaning that many people use the game like LinkedIn, as a way to form connections that eventually graduate to full-time friends.

Carol from Florida, 67, is especially active within the FarmVille community. She tells me that the game and the people who play it have been a lifeline for her. “I went through a really bad divorce and my daughter set me up on FarmVille,” she says. “Having to learn the ropes of being on a computer and playing this really dumb game I needed to concentrate on took my mind off 39 years of a shitty life. When you take evil out of the dark and expose it to the light, it shrivels up. And that’s a lot of what this game did for me. FarmVille literally saved my life.”

Linda stresses that the people she has met on FarmVille are more like family than an online gaming community. “I’ve laughed with them, celebrated the births of children and grandchildren with them and cried with them when someone we’ve come to know through FarmVille has passed on,” she says.

There are also FarmVille fans who ditched the game a while back, but remain a key part of the community. Barry, who is 52 and from Milton Keynes, uploads FarmVille themed music to YouTube. He’s written three original songs and co-written several parodies, including festive classics like “It’s Beginning to Look a Lot Like FarmVille”, and “It’s The Most Magical Farm of the Year”.

A hardcore fan in the beginning, Barry grew angry with the game’s constant crashing and bugs and eventually left it behind. He says that others have found it harder to let go. “I’ve had people messaging me saying that they’ve just burst into tears because it means that much to them,” he says. “A lot of people have taken it really hard, almost like they’ve lost a finger or something.”

Other players have migrated to FarmVille 2, a sequel released in 2020, and it’s two spin-offs: FarmVille 2: Country Escape and FarmVille 2: Tropic Escape, which can both be played on iOS and Android. FarmVille 3 is set to launch next year to complete the trilogy. Unfortunately, most hardcore FarmVille players say these games aren’t a patch on the original. The spin-off’s community features are particularly poor, which is what drew many to FarmVille to begin with.

“I’ve been playing FarmVille Tropic Escape on my phone, but there’s no communication, no fellowship, no getting to know the other players,” explains Carol, adding: “A lot of us have talked on Facebook and said, what do we do now FarmVille is ending? How do we survive?”

Others are gutted they won’t get compensation for the real life money they’ve spent in the game. As a web developer, Alex has reached out to the Zynga CEO to see if there’s any way they can collaborate to keep FarmVille running – swapping Flash’s spaghetti code for the more sophisticated HTML5.

“We would just need four or five really talented developers,” he says. “There are enough people signing petitions, we could even do a GoFundMe sort of thing.”

Right now, a lot of fans are considering constructing permanent physical homes for their FarmVille creations, immortalising them in picture books and photo albums. Even as Zynga’s empire wilts away like unharvested vegetables, there is hope that some farms may live on in the form of physical artefacts that might eventually function like family heirlooms.

Whether online or offline, Alex hopes to preserve his mum’s farm for generations to come.

“I’ll always want to be able to go and look at her farm and show my daughter – this is the thing your granny built over the course of ten years.”

Mail, masks, and the Nintendo Switch: The objects that defined 2020

Sat Jan 2 , 2021
This year has deeply changed us — all at once, things were no longer as they were. That was followed by the slowly dawning realization that the unfathomable was here to stay. The country was rattled; we became situated in the kind of chaos that hadn’t even ever occurred to […] 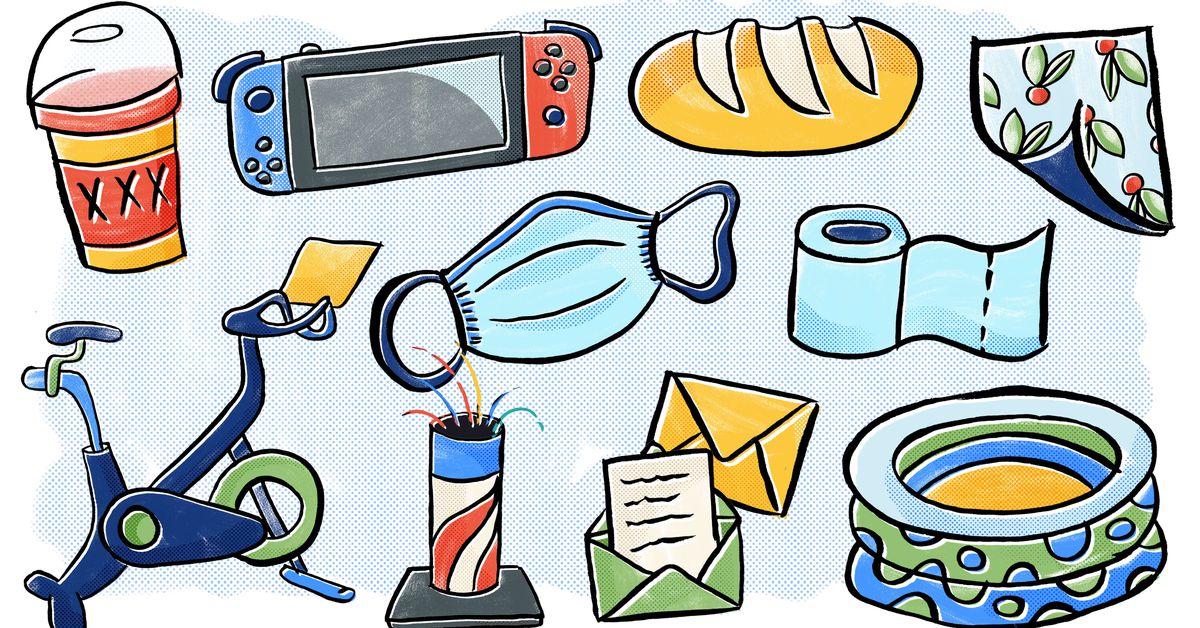