It’s week who-knows-when of the COVID-19 outbreak here in the U.S., and one thing has become painfully apparent as I continue to work from home: My back hurts. A lot. And if you’re also lucky enough to be able to work remotely, chances are, yours does too. An online search for “lockdown back pain” turns up a slew of complaints from people looking for relief, stretching tips, and what many view as a silver bullet solution: a comfy new chair to help cure what ails them. But will a new throne really help your back, or is your spine simply asking you to give it a break? To find out, I took stock of my own seating arrangement, considered the alternatives, and learned how terrible my choice was for my aching body.

My chair, which uses bungee cables as the back support and which I purchased at a steep discount from a Target in Florida, has served me well for close to a decade. But after talking to experts, I learned those bungee cords were in fact not great for my body. Flat and thin, they were not doing the circulation in my legs any favors, serving as pressure points when my weight should’ve been spread more evenly. And then there was the Great Bungee Attack of 2020, wherein one of the straps snapped and bruised my bum during a conference call. Was it one of the plastic attachment points finally giving up the ghost? Was it me putting on a few pandemic pounds? Or was it destiny trying to encourage me to take better care of myself? Either way, I knew it was time to make a change, and time for a chair that cared about my posture.

Gaming chairs are high-backed bucket-style seats popular on platforms like Twitch, where streamers sit for hours on end, supported by chairs complete with company logos or homages to beloved characters. While many gamers swear by them, others are turning on them—like Twitch streamer and prison reform activist Tajah Zinda, also known as Zombaekillz, has owned two gamer chairs during her streaming career, but has come to believe they’re built to look cool online, not keep people comfortable.

“I would, 10 out of 10 times, tell people not to purchase a chair based on gaming, but to purchase something that’s going to be okay for their back over time,” says Zinda. “It’s like getting a jacket that looks really cool, but doesn’t block the wind, and doesn’t keep you well insulated. But man, it looks great.”

Indeed, many gaming chairs aren’t actually all that comfortable. Their straight back does little to conform to your spine, while the bucket seat restricts your freedom of movement and forces you to lean forward to interact with your computer, putting pressure on your spinal column, potentially contributing to issues like herniated discs and muscle fatigue. They’re designed like racing chairs, a recipe for disaster considering how little racing you’re probably doing at your desk.

“I have chronic pain, and sitting in a crappy chair is going to exacerbate that,” says Zinda. “The last thing you want to do is be in a chair that’s not helping with the circulation of your body, not supporting your spine, and causing you to slouch.”

Gaming chairs have long been the domain of niche companies, with a few high-end models but many budget, not-so-comfortable options. But now, bigger firms are getting in on the market, including Logitech, maker of accessories ranging from inexpensive notebook mice to high-end keyboards and controllers for professional esports players. It’s teaming up with Herman Miller, maker of the iconic Aeron chair, for a co-branded gamer chair. Called the Embody Gaming Chair, it has adjustable sacral and lumbar support for your lower back and ditches the bucket-style seating for adjustable seat depth. But at a whopping $1,450, it costs as much as a nice gaming PC, and is probably outside the price range of many would-be buyers. At least it looks cool, though.

If gaming chairs aren’t the solution, what about a fancy office chair? You know, the ones in high-rise buildings and corner offices with floor-to-ceiling glass windows?

To find out, I sat in Humanscale’s Freedom Headrest, a task chair that supposedly blows your Office Depot executive chair out of the water—but, at $1,200, isn’t exactly cheap, either. The Freedom eschews the spring-loaded mechanism in other office chairs that require sitters to apply constant force to remain reclined. Instead it relies on your body weight, gravity, and a little physics to make for easy reclining.

“Springs, by definition, will not have constant force…it will increase in tension as you engage the mechanism more and more,” says Humanscale Design Director Sergio Silva. “So in order for you to recline to a position that you might want to be in, you will need to essentially either put force into it if you’re a light body type in order to hold yourself in that position. On the other hand, if you happen to be heavier, you will potentially end up with a chair that will not support you at all.” I’m a runner and a lightweight, but the Freedom’s gravity-friendly feature worked well enough for me, and definitely required less force to kick back than the chair in my office that I haven’t seen in months.

But do people really need to spend a grand or more on a chair just to rid themselves of this meddlesome back pain? Perhaps not.

“People still have severe back pain and severe health issues even when they’re in a thousand-dollar chair,” says Dr. Shaquita White, a chiropractor Mississippi who treats everyone from infants to streamers (including Zombaekillz). White says lower back pain is often caused by a lack of movement, exacerbated by poor posture and weak core muscles. He encourages people to take breaks to move and exercise rather than stay in their chair for hours on end. “It feels good when you’re sitting in it, but you get up and say ‘Oh, I pulled a muscle,’” White says. “That’s because you’ve been in that static position your body was not meant to be in for such a long period of time.” The solution? Proper alignment from head to toe, and 15 minute stretch breaks for every hour you’re sitting.

If you want to upgrade your existing chair, be it a straight-backed kitchen chair or your oversized executive office chair from some nondescript office supply store, you’ve got options. “One really inexpensive solution is to…roll [a] towel up, put some rubber bands on it, and figure out a way to affix it to the backrest of the chair,” says Jonathan Puleio, an ergonomist at Humanscale. “It actually fills in the curvature of your lower back for your lumbar spine.”

White recommends a chair accessory called a “wobble cushion,” which looks like the top third of a yoga ball, filled with air and designed to fit on the seat of your chair, under your bum, to promote increased blood flow thanks to increased movement. “We are meant to be mobile in nature, that’s how we heal,” says White. “That’s how we get nutrients to our brain, to our joints. So if you’re sitting, especially in the chair for long periods of time, then you’re not getting those joints to move, and you’re not getting that cerebrospinal fluid flow to your brain.”

After sitting in the Freedom for a week, I definitely noticed an improvement in my posture, especially when I made an effort to sit up straight, pull my body closer to my desk, and stick a dictionary underneath my monitor to lift it to eye level. Did the Freedom feel as though it was worth the hefty price tag? The verdict is still out, but I can say sitting in one made me reconsider what a chair is, and what it could be, besides a literal pain in the ass.

Prada Moving on Up

Wed Jul 29 , 2020
MILAN — Patrizio Bertelli sees a further shift into luxury for Prada. The chief executive officer of the Italian luxury group has been spearheading a no-markdowns policy and slashing wholesale accounts since last year, but he spelled out his aspirations to further raise the profile of the brand during a conference […] 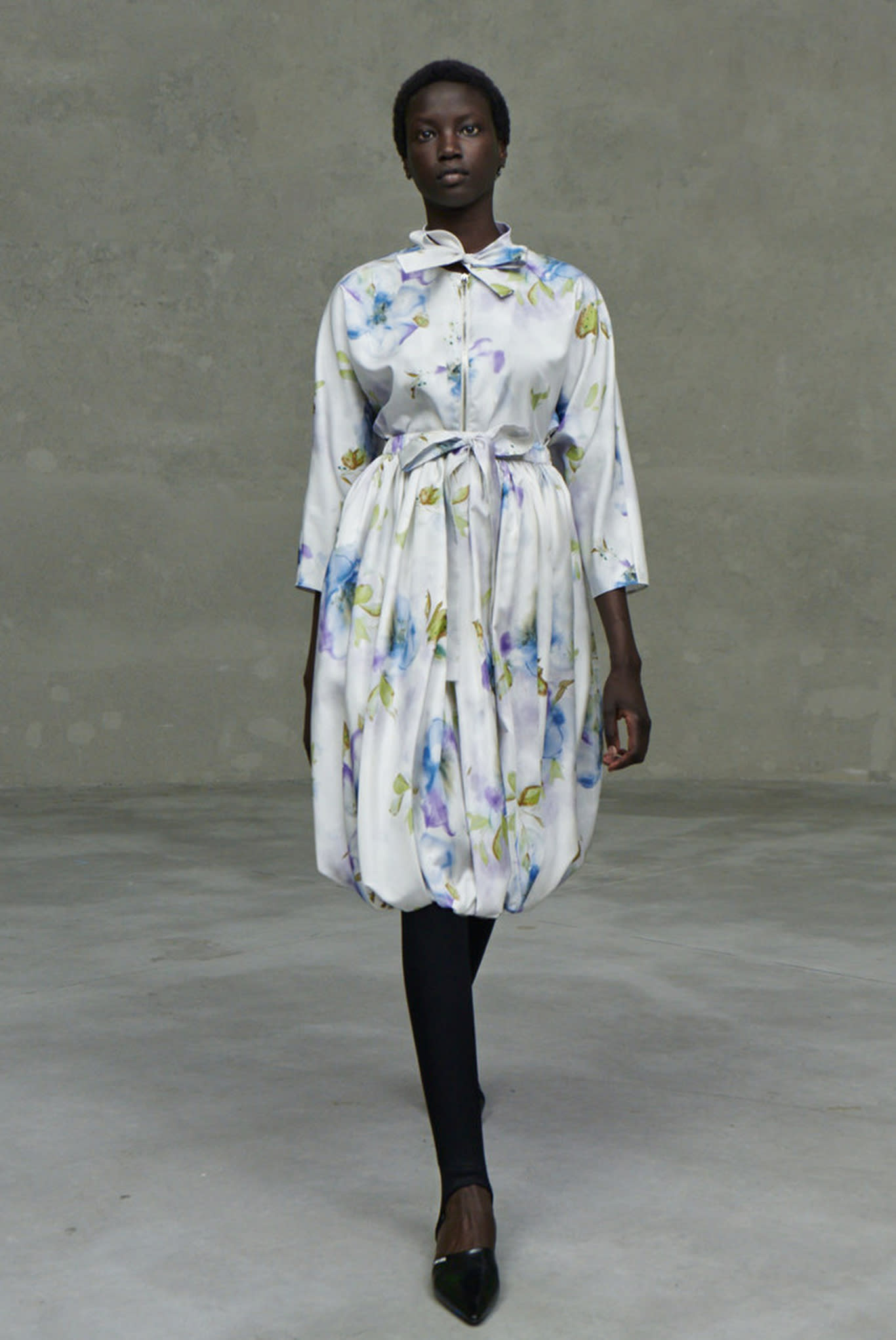