With just 11 days and a handful of hours to go before Election Day, President Trump and Joe Biden met onstage Thursday night for their second and final debate.

After the chaos of the first debate, the introduction of a mute button ushered in a decidedly more civil tone during the final debate. That’s not to say things didn’t get heated, particularly as the president made a flurry of unsubstantiated claims about his rival’s financial dealings. But in a marked shift from the Sept. 29 face-off, the American people could actually hear the candidates speak as they answered policy questions.

[Read the story: “Trump and Biden spar in quieter but still volatile final debate” in the Los Angeles Times]

Moderator Kristen Welker of NBC News focused early on the COVID-19 pandemic, which put the president on the defensive as he asserted that the leaders of other countries had been congratulating him on the U.S.’s pandemic response.

The president has maintained a buoyantly optimistic attitude toward the coronavirus over the last seven months, even as the pandemic worsened and more than 220,000 Americans died. In keeping with that outlook, the president reaffirmed Thursday that the virus “would soon be gone” and said the nation was “rounding the corner.” (A quick fact-check: Although California has largely avoided the new wave of coronavirus cases, a third COVID-19 surge has sparked alarm elsewhere in the country.)

Among other topics, the candidates also sparred on healthcare, immigration, race in America and foreign election interference, which Trump used as a segue to accuse Biden and his son of corruption.

[See also: “Key takeaways from the second and final Trump-Biden debate” in the Los Angeles Times]

As White House reporter Chris Megerian, who was tasked with fact-checking Thursday’s debate, writes, “The president and his allies have been hammering Biden for his son Hunter’s overseas business dealings in Ukraine and China, but they have yet to produce any clear evidence that Biden misused his authority as vice president for his family’s profit.”

Biden called Trump’s accusations of familial self-dealing with foreign powers “malarkey,” saying, “I have not taken a penny from any foreign source ever in my life.”

And the California of it all? The state has long been a favored punching bag for the president, but it barely figured directly in this debate.

There was little California airtime, other than a brief mention early on, when the president referenced people dying in the state as evidence of how Democratic governors are failing in their pandemic response. (Another quick fact-check: California has seen more than 17,000 COVID-19 deaths, which is tragic by anyone’s measure. But as my colleague Ron Lin recently reported, over the last two months the state has managed to reopen key parts of the economy without seeing the widespread spike in cases, hospitalizations and deaths that occurred this summer.)

Thousands of L.A. County children could be back to school sooner under a new policy: County officials have made it easier for elementary schools to reopen for their youngest students under waivers, dropping a requirement for schools to provide a letter of support from employee unions as part of the application, The Times has learned. Los Angeles Times

Note: Some of the sites we link to may limit the number of stories you can access without subscribing.

Disney lost Shonda Rhimes to Netflix over a Disneyland pass. In a wide-ranging interview, the showrunner talks about owning her power, creative fulfillment and the unlikely last straw that pushed her to jump ship after 15 years at ABC. The Hollywood Reporter

Two Black men sentenced to life as teens will be freed. But should the L.A. County district attorney have reviewed their convictions earlier? Los Angeles Times

Senate Judiciary Committee Republicans overcame a boycott by Democrats to approve Judge Amy Coney Barrett for the Supreme Court, sending President Trump’s third pick for the high court to the full Senate for confirmation as early as next week. Los Angeles Times

Four months after four San Jose police officers were caught posting offensive comments on a private Facebook page, the Santa Clara County district attorney has announced he will seek to dismiss more than a dozen cases in which the officers’ testimony was pivotal to a conviction. Los Angeles Times

HEALTH AND THE ENVIRONMENT

The FDA approves remdesivir to treat COVID-19. The antiviral medicine had been authorized for use on an emergency basis since spring. It now becomes the first drug to win full Food and Drug Administration approval for treating COVID-19. Associated Press

Are art museums still racist? In her first piece as an arts and urban design columnist for the Times, Carolina Miranda examines “the COVID reset.” Los Angeles Times

Palm Springs has seen a spike in vacation rental complaints, coupled with an unanticipated influx of visitors venturing to the desert in the summer heat for longer-than-usual stays to break from sheltering in place. The Desert Sun

Get our free daily crossword puzzle, sudoku, word search and arcade games in our new game center at latimes.com/games.

My dad sold agricultural and foothill properties in Fresno County in the 1970s, including some massive orange groves. We could go and glean the oranges still on the trees after the first harvest. We would pick and eat our fill straight off the trees, and come home with the trunk of the car filled with oranges — with plenty to share with our neighbors and people from the church. The extra fridge in the garage was always full of the biggest and juiciest oranges from that second harvest, and fresh-squeezed juice was a family staple.

If you have a memory or story about the Golden State, share it with us. (Please keep your story to 100 words.)

Please let us know what we can do to make this newsletter more useful to you. Send comments, complaints, ideas and unrelated book recommendations to Julia Wick. Follow her on Twitter @Sherlyholmes.

Fri Oct 23 , 2020
The mansion sits on the western side of the cul-de-sac and enjoys dramatic views of the Byzantine-style architecture of the domed Temple Emanu-El synagogue next door to the private community. COURTESY OF JACOB ELLIOTT Text size One of the three-dozen mansions that make up San Francisco’s highly affluent Presidio Terrace enclave […] 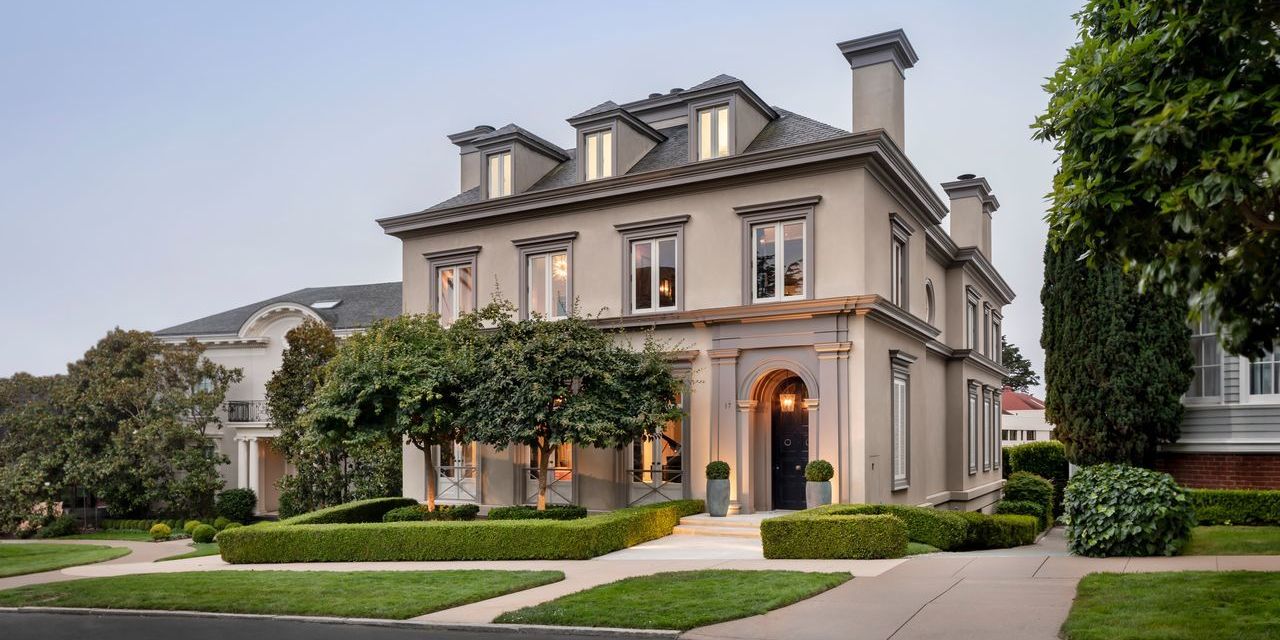