Klaus Müller-Blech is sending Christmas to Gettysburg, Pa., in a 1,000-foot long container ship. So far it’s running three months late thanks to global transportation congestion. Mr. Müller-Blech, 62 years old, is the Christmas King of Germany, importing mass-produced decorations from Asia that he resells across the West alongside the […]

Mr. Müller-Blech, 62 years old, is the Christmas King of Germany, importing mass-produced decorations from Asia that he resells across the West alongside the handblown glasswork that his family has been crafting for 13 generations.

The slow and expensive global journeys of Mr. Müller-Blech’s baubles, trees and ornaments show how every aspect of international transportation is under stress ahead of the busy Christmas season.

The onset of the pandemic and resulting slump in trade idled ships, which along with their containers, were then out of position when consumer demand rebounded this year. Continued Covid-19 outbreaks meant workers missed shifts, closing some port terminals, keeping truck drivers home and slowing cross-border movements. The blocking of the Suez Canal in March further muddled schedules.

Around the world, toy makers, booksellers, large retailers and manufacturers are already warning that some products won’t be in place in time for Christmas, while extra shipping costs and delays are adding to bills for both buyers and sellers.

For Mr. Müller-Blech’s Inge’s Christmas Decor GmbH, the cost of renting a 40-foot container from Asia to Europe has increased 10-fold to as much as $18,000, and it arrives up to eight weeks late. His shipment to Gettysburg’s Christmas Haus store was supposed to arrive at the Port of Baltimore in June. It set off from Germany in late August and arrived Tuesday. Now it’s on a truck.

When Mr. Müller-Blech was a child, he helped out at the family business, and every day was Christmas. Many of the traditions the West now knows as Christmas hail from Germany. Today, Mr. Müller-Blech runs a museum in his hometown of Neustadt bei Coburg, in central Germany, devoted to the history of Christmas decorations, and ships some 4,500 types and models of decoration to 2,500 customers in 28 countries. Last year he sold some 15 million tree baubles.

Festive decorations would typically be appearing on the shelves of some stores by the end of this month, but only around half Mr. Müller-Blech’s yearly cargo is on its way to clients.

“Everything has changed,” Mr. Müller-Blech said of the pandemic’s impact. “You just go to work in the morning, you turn on your computer, and then OK, fantastic, there has been another delay.”

This year, Mr. Müller-Blech doesn’t think his business will turn a profit.

A worker cuts away excess material from ornaments.

A worker cuts away excess material from ornaments.

A painter puts a tray of finished baubles on a shelf.

the owner of the Christmas Haus store, usually needs all his festive goods to arrive by June to have time to warehouse, catalog and get the decorations and toys ready for sale online or in store before the rush of buyers that starts at the beginning of October.

“The shipping industry has a hiccup, and everything slows and things aren’t functioning as normal,” said Mr. Lund.

His shipments from Mr. Müller-Blech and others were scheduled to arrive in Gettysburg by truck on Tuesday. But Mr. Lund was told this week that his forwarders couldn’t find the right type of truck to carry the goods, meaning a further delay.

“It goes on and on and on,” he said, laughing. “You have to laugh, because there is nothing you can do about it.”

As of Friday, there were 600 large container ships waiting to dock outside ports in Asia, Europe and North America, and the delay of vessels arriving into U.S. and Canadian ports from the Far East has increased from 14 hours in June of 2020 to almost 10 days this August, according to eeSea, which provides data on the container market.

With some companies deciding to put their goods on planes instead of ships, global airfreight rates this month are more than double their 2019 levels, before the pandemic, according to Clive Data Services, which provides industry pricing data.

Covid-19 has also led to an acute shortage of truck drivers in the Western world, increasing the cost of moving goods by road, too.

In June, the port terminal of Yantian, in southern China, shut down after at least one worker tested positive for Covid-19. For Mr. Müller-Blech, that added about three weeks onto a delivery of 40 containers that had already been delayed about five weeks.

“Matters get confirmed and two hours later, they change again,” he said. “As long as the containers are on a ship and as long as that ship is in the harbor, you can only talk, talk and wait, wait.”

Because ports run on exact schedules, delays at one terminal cascade down to others when a container ship misses its slot to berth. After the ship carrying Mr. Müller-Blech’s order set sail from Yantian late, it had to wait an extra week for a new position outside Hamburg, he said.

There is almost no part of the transportation system that isn’t experiencing problems. With port delays so great, Mr. Müller-Blech recently decided to ship six of his containers by train from southern China via the trans-Siberian express and into Germany. The route adds an extra €500, the equivalent of about $586, onto the cost of each container’s voyage but is a week faster than the trip by sea. Then German rail workers went on strike in late summer, and the cargo handlers left the containers sitting in a Chinese train station for two weeks, concerned they would have nowhere to go once at their destination.

“I had the extra cost, and an extra wait,” he said.

Even after cargoes reach Germany, they face a second journey to European clients and another round of delays, thanks to the same shortage of truck drivers that has affected the U.S. A shipment of decorations from Mr. Müller-Blech’s warehouse to Italy would have taken up to four days, now it is around 10 days.

“No, of course not,” he said. “It’s a very different business to decorations.”

Mr. Müller-Blech isn’t the only one struggling.

Some U.S. retailers are warning that some artificial Christmas trees could sell out early because deliveries have been hit by congestion; they are raising prices by 20% to 25% to keep pace with skyrocketing shipping costs.

PLC, have also warned of product shortages over the holiday season.

Book publishers, for whom the fourth quarter can account for as much as 40% of annual sales, face the prospect of potential bestsellers stuck in warehouses. Some publishers have postponed the release of big titles until after the holidays, according to Ingram Content Group, a Tennessee-based book industry services company.

What steps are you taking to prepare for holiday-related shipping delays? Join the conversation below.

Mr. Müller-Blech says his life has become one of late nights and constant email checking. Like Santa Claus, Klaus Muller only stops working for Christmas on the actual day. He says he can’t remember looking forward to Christmas Eve as much as he does this year.

“I will be very happy when it is the 24th of December,” he said.

Mr. Lund has been dealing with Mr. Müller-Blech for 20 years and says he doesn’t get riled by much, including these delays.

“He has a long term perspective, his family has been doing this since 1597,” he said. “He has Christmas in the blood.”

Sun Sep 26 , 2021
ORLANDO, Fla. – Walt Disney World is preparing to celebrate its 50th anniversary on Oct. 1. Disney fans can celebrate the big day with LEGO through an all-new set that features a beautiful miniature of Cinderella Castle and includes a vintage-style Mickey Mouse minifigure. “This unique display piece makes a […] 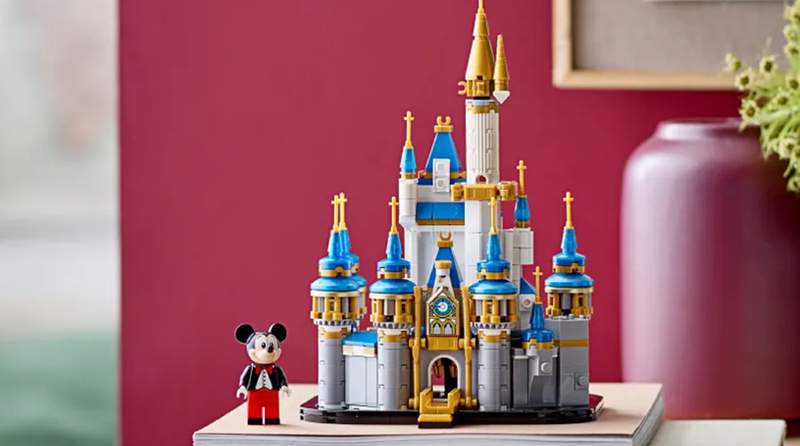