CBS News is chronicling what has changed for the lives of Americans in 2020 amid the coronavirus pandemic. The coronavirus pandemic has forced California small business owner Stephanie Mufson to make dramatic changes to survive. In July, she told CBS News she wasn’t sure if her company Parade Guys, which builds floats and […]

CBS News is chronicling what has changed for the lives of Americans in 2020 amid the coronavirus pandemic.

The coronavirus pandemic has forced California small business owner Stephanie Mufson to make dramatic changes to survive. In July, she told CBS News she wasn’t sure if her company Parade Guys, which builds floats and large displays for outdoor festivals would make it.

Mufson, an independent artist, typically works with a team of contractors who are experts at painting, sculpting, and building floats for outdoor festivals and parades in the San Francisco Bay Area.

But in the last six months, festivals like the San Francisco Pride Parade and Fourth of July celebrations did not take place in person, resulting in economic hardship for the independent contractors who rely on those outdoor festivals for work.

“It is not the same world that I spent most of my life basing my career around,” Mufson said, adding that “to survive and thrive, you have to adapt.”

As the demand for floats has dropped off, Mufson has been taking advantage of the down time to acquire new skills to exploit her background as a professional artist. She’s enrolled in a full-time graduate school program with a focus on meeting the growing digital demands of the art industry.

In a typical summer, Mufson said her team would build floats and displays for a dozen different parades and celebrations. This summer she said she’s only had a couple of freelance projects and is teaching online art classes to help pay the bills.

San Francisco’s support during the pandemic has meant a lot to Mufson.

“The City has been so generous with us and they’ve been really supportive and understanding of the fact that obviously we can’t pay rent because we don’t have business,” Mufson said.

San Francisco Mayor London Breed recently announced an extension of the eviction moratorium, giving small businesses that bring in less than $25 million a year until December 1 to make rent payments.

Mufson said she is “grateful to live in a city that sees the value in what we do,” and added that she’s hopeful protections from evictions can continue “until we can get back to work.”

When the pandemic forced the cancellation of large outdoor gatherings, Mufson brainstormed creative ways to make parades feasible, even when people still fear infection. One idea gaining some traction, she said, is setting up a drive-through parade.

Instead of floats driving by the hundreds of thousands of people that usually gather on the streets of San Francisco, Mufson wants to keep the floats in place so families can drive through the route, stop for photos, and move on to the next one while remaining safe in their vehicles.

“Hopefully, this will give artists some work and create an opportunity for people to have an engaging experience through a more socially distant medium,” Mufson said.

Brain Travis, who works with Mufson at Parade Guys and is also a musician, has been connecting with other musicians remotely to produce songs. In July, he told CBS News that producing weekly online music events was helping him buy groceries while he was out of work.

Travis said he spent several months learning new software programs to efficiently livestream a weekly show. He added that live streaming content “is another way that people are going to consume media” and “to stay relevant” he had to figure it out as well.

Between now and Election Day, Travis said he plans to continue producing weekly music shows to livestream and help keep him afloat. Travis said he applied for unemployment assistance four months ago and has yet to receive any benefits.

More than five million Californians applied for traditional unemployment benefits between March and September, according to the state’s Employment Development Department. Additionally, more than 4 million applied for the Pandemic Unemployment Assistance (PUA) program during the same time.

The PUA covers business owners, self-employed workers, and independent contractors who may not be covered under the traditional unemployment assistance program.

Travis said, “the systems we have in place have not really helped me because it’s now three and a half, almost four months and I still haven’t received unemployment.” Travis said he made regular calls to the state’s unemployment line to figure out what was causing the delay in receiving the funds.

For weeks he couldn’t get through the automated message and said he had to rely on tips and tricks that users posted on a forum on Reddit to get a state representative on the line.

“You’ve got to actually figure out a hack in order to get in touch and talk to somebody,” Travis said. He added that when he finally got “a carbon-based life form on the line” the individual “sounded really overwhelmed” but helped settle an error that was causing the delay in disbursement of funds.

“Apparently now I’m going to be getting payments soon, but they don’t make it easy,” Travis said.

In July, Travis told CBS News that as an independent artist, he’s used to living on a low budget. But he said, “you can’t just sit there and hope that things are going to work out.”

While work at Parade Guys is limited to a few hours a week cleaning up the mess left behind from previous projects prior to the pandemic, Travis said he’s continuing to make videos, bringing new audiences to his YouTube page, and picking up freelance graphic design projects.

“You have to have radical trust but always be throwing train tracks ahead of your train,” Travis said. “You have to actually be actively seeking out the opportunities,” he added.

The 50 most expensive colleges in America, ranked

Make a Splash With Container Pools

Wed Sep 16 , 2020
Shipping containers are kind of like LEGO bricks. Sturdy and stackable, they can be crafted into all sorts of creative things, from fold-out coffee shops to surprisingly stylish modern homes. They also happen to be the perfect starting point for your very own DIY portable swimming pool. A sleek modern […] 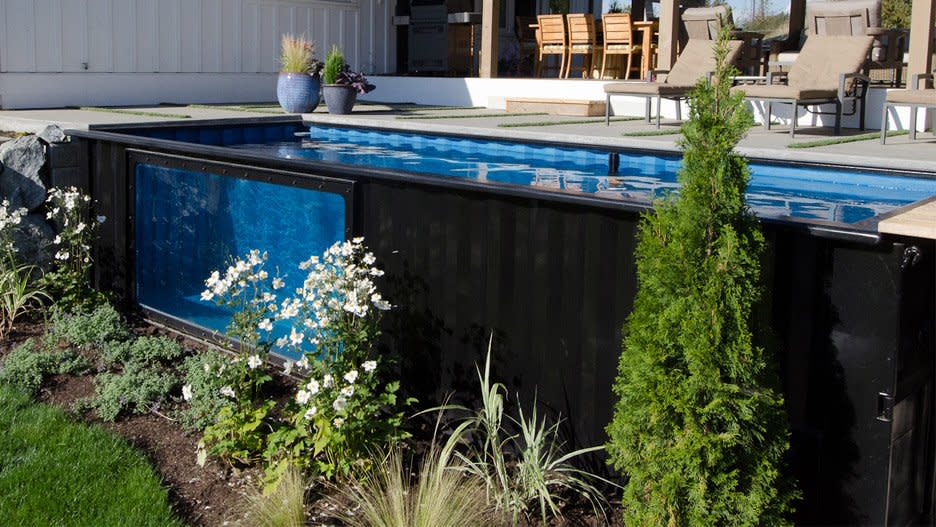