Grade: 2.0/5.0 Shawn Levy’s “Free Guy” does not pretend to be life-changing or innovative cinema, but it still could have used more brainpower in its pursuit of dumb fun. Although entertaining enough to watch until the end and funny enough to evoke a few laughs, the movie’s confusing logic, inability […]

Shawn Levy’s “Free Guy” does not pretend to be life-changing or innovative cinema, but it still could have used more brainpower in its pursuit of dumb fun. Although entertaining enough to watch until the end and funny enough to evoke a few laughs, the movie’s confusing logic, inability to steer clear from cliches and feeble attempts at establishing depth all exacerbate its various shortcomings.

Guy (Ryan Reynolds) is a non-playable character (NPC) in a video game called Free City, an open-world game akin to a PG, massively multiplayer online version of Grand Theft Auto. Here, the NPCs’ sole purpose is to enrich the world for the “sunglasses people” — real players — and repeat the same routine over and over again. After falling head over heels for a girl in sunglasses who passes him on his way to work, Guy steals a pair of sunglasses from a player on a bank-robbing mission and unlocks sentience, self-awareness and the freedom to do whatever he wants.

The building of the film’s in-game world is actually quite impressive, and video game elements are incorporated into the film in a stunning and immersive way. Unfortunately, the premise of “Free Guy” remains nonsensical despite several attempts at offering viewers clarity.

Guys’ dream girl turns out to be Millie (Jodie Comer), a game developer scouring Free City to find a save file that proves that Free City publisher Antwan (Taika Waititi) stole the code she created for a different game with her partner, Keys (Joe Keery). In order to obtain the save file, Millie has to play Free City, break into another player’s virtual home and steal the file from his wall. This makes for a far more entertaining plot, but one can’t help but wonder why this issue couldn’t have been resolved through a direct message or a couple of emails. How and why in the world would save files be managed in this way in the first place? Could the writers not come up with a half believable explanation for any of this?

Another hair puller is the Free City development team’s inability to identify Guy as an NPC even after gaining worldwide recognition within the gaming community (cue the YouTuber and streamer cameos), which is particularly frustrating due to the film’s insistence that Keys is some kind of computer genius.

The film’s nonchalant reaction to Guy’s existence is yet another wasted opportunity. Exploring the ramifications of creating such advanced self-learning artificial intelligence would have introduced a facet of the plot that is nuanced, exciting and very timely, but Guy and the other Free City characters remain reduced to harmless decorations for the sole purpose of entertainment.

In addition to these glaring plot holes, “Free Guy” gives in to the “get the girl” cliche not once, but twice — one of which is, hilariously, between Millie and Guy. Millie’s attachment to this NPC is almost comical; it is incredibly difficult to take their relationship seriously knowing that he is, as they mention time and time again, just code. This leads to a confusing, pointless take on morality when the film begins to regard the lives of the Free City NPCs as if they were real people.

Although offering some genuinely laugh-worthy lines, some of the humor in “Free Guy” misses the mark completely. For instance, the film makes two virginity jokes — which is two too many — but you’ll certainly chuckle once in a while, especially when the brilliant Taika Waititi is on screen. The film is also quite visually pleasing and does a good job of keeping audiences wide-eyed with familiar pop culture references. Flaws aside, “Free Guy” is a fun movie at its core, and that can warrant some appreciation.

Somehow both cookie-cutter and rough cut, “Free Guy” is worth a watch purely as lighthearted entertainment. Give your critical thinking skills a break and don’t expect the film to be more than it tries to be. Expect even a little less than that and you may find yourself pleasantly surprised.

Get Seriously Spooky With These Halloween Decorations

Fri Aug 13 , 2021
Halloween is one of the best opportunities for festive decorating. While Christmas decorations can be fun, and spread cheer, it’s the best Halloween decorations that offer a greater opportunity for individual creativity. This is in part thanks to Halloween’s range of memorable movies, as well as the plethora of scary […] 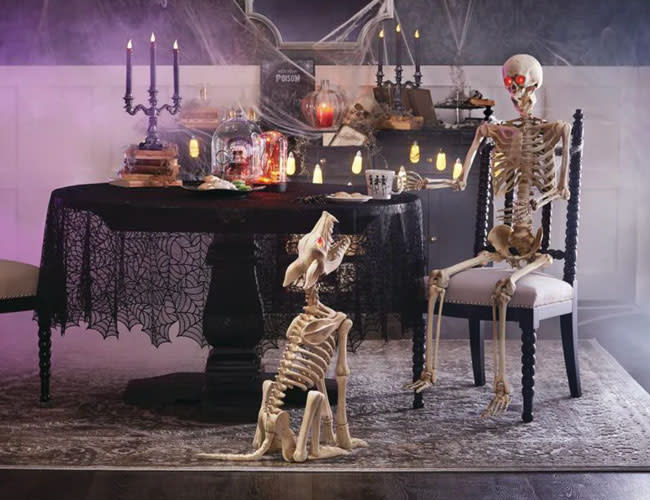