The late astrologer Walter Mercado in full regalia in a scene from ‘Mucho mucho amor.’ Giovan Cordero NETFLIX Walter Mercado’s intimate world at his home in San Juan, Puerto Rico, was a universe of treasures that he had bought or had been given on his travels around the world. The […]

Walter Mercado’s intimate world at his home in San Juan, Puerto Rico, was a universe of treasures that he had bought or had been given on his travels around the world. The Puerto Rican astrologer amassed a collection of rings, pendants and bracelets with precious stones that not only have aesthetic and market value, but for him they were loaded with those good vibes that constituted his spiritual search and that he used to send to his millions of followers in the United States and Latin America.

More than 135 objects beloved by Mercado and valued between $500 and $60,000 will be offered in an online auction between Nov. 30 and Dec. 9. The auction is coordinated by Bonhams house, one of the most prestigious in the world, founded in 1793 and specializing in works of art and antiques, often owned by celebrities.

Escrito en las estrellas (Written in the Stars) will include some of Mercado’s luxurious capes, in which the designers who worked for the astrologer captured the artistic personality of a showman who believed in miracles and cherished the arts.

A sample of those capes was on display in the exhibition Mucho, mucho amor, 50 años de Walter Mercado, at HistoryMiami Museum in August 2019. One of these capes, which reflects the Puerto Rican flag in sequins, Mercado gave as a gift to actor and composer Lin-Manuel Miranda, creator of “In the Heights” and “Hamilton.” Others are already part of museum collections in the United States, such as the Smithsonian, and in Mexico.

It is precisely this museum pedigree that gives more value to one of the capes up for auction now. The cape, made of white silk adorned with gold beads, sequins and lace details, has an estimated value of $2,500 to 3,500.

The astrologer used it for the publicity photos of the exhibition at HistoryMiami and in the opening scene of “Mucho Mucho Amor: The Legend of Walter Mercado,” a documentary about Mercado’s life made mainly by Miami locals, directors Cristina Costantini and Kareem Tabsch, and producer Alex Fumero.

For two years they had access to the intimate world of Mercado, his family and close assistants, and his house in a gated community near San Juan, which his nieces put up for sale, because the neighborhood restrictions did not allow them to turn it into a museum dedicated to the astrologer.

The auction also includes a yellow reversible cape with delicate flower embroidery and gold trimmings; the reverse is gold with details of eyes, sequins and rhinestones (valued between $1,500 and $2,500). A green cape with black Chantilly lace accents, which Walter wore in 2006 for a Doritos commercial, goes on sale for between $1,000 and $1,500.

Walter Mercado’s rings and jewelry up for auction

Although Walter Mercado was surrounded by books on astrology, philosophy and cinema, one of his greatest passions — his interest in antiques and Asian art — was also palpable in the decoration of his house. His good eye for detecting beauty in a marketplace in India, Mexico or Brazil led him to acquire pieces and pendants made by artisans whom he esteemed and respected.

“I was into Taoism, Sufism, Scientology, I tried all the religions and one day I got tired of looking outside. Today my guru is in here. I am my center,” Mercado said in an interview with El Nuevo Herald months before his death.

Walter was not someone to lose sleep over money, but he recognized value and his world had a special sparkle, a touch of “Breakfast at Tiffany’s,” which is clear based on the jewels he owned, such as a platinum and diamond ring worth $40,000 to $60,000.

There are also simpler rings and pendants in 18-carat gold with stones such as amethyst, aquamarine and diamonds, another with the figure of the god Ganesh — one of his favorites that he used in many photos — and with his initials.

Recently, Walter Mercado has become even more popular as a T-shirt with his catchphrase “Mucho, mucho amor” was being sold in Old Navy. With a black background and pink cursive letters, the shirts reflect the Walter who wanted to be eternally young, who opened his heart to many and who always had words of encouragement for his followers.

For the full catalog up for auction, http://www.bonhams.com/online_auctions/27418/

Sat Nov 27 , 2021
LANSING, Mich. (WILX) – Michigan businesses said they are thrilled to see more shoppers this weekend. This has been a hard year and a half for businesses as they navigated through the COVID-19 pandemic. But, they said things are looking up. The Record Lounge in Reo Town Marketplace was closed […] 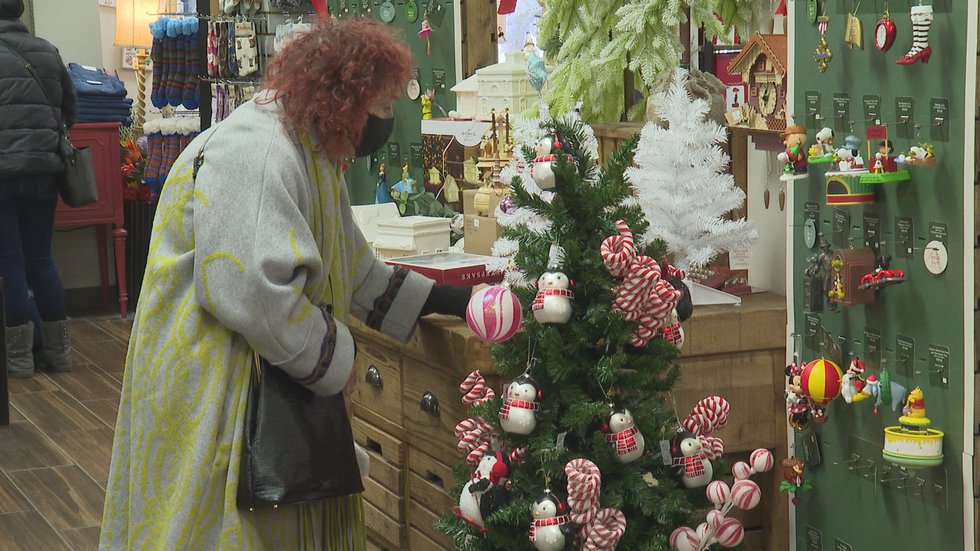