Click here to read the full article. As the spring 2021 season unfurls, it is already shaping up as a dramatically different gig compared to seasons past. The coronavirus pandemic did not only wallop the luxury sector, it also jeopardized fashion’s most symbolic ritual, forcing its governing bodies to rethink […]

As the spring 2021 season unfurls, it is already shaping up as a dramatically different gig compared to seasons past.

The coronavirus pandemic did not only wallop the luxury sector, it also jeopardized fashion’s most symbolic ritual, forcing its governing bodies to rethink the current round of fashion weeks and go almost fully digital.

Truth be told, fashion shows have been flirting with the digital sphere since social media became the medium of choice for brands and attendees to promote almost in real time the creations strutting down the catwalk.

But while runway shows provide a platform for designers to show off their latest efforts, they couldn’t take place without a slew of supporting players — set designers, hair and makeup artists, music designers — all of whom contribute to conjuring up a precise concept.

Among the professionals involved, stylists hold a particularly delicate role, helping designers rationalize their creative output, making it more powerful or viable, by way of putting the final looks together in a way that resonates with the creator’s vision.

Their work, too, is undoubtedly influenced by the new digital medium as desktop and mobile screens have to make up for the lost physical component.

“You need to take into account that you’re not putting together a show on a real catwalk, with certain lights but rather for a 2-D screen where immediacy is key,” said Anna Dello Russo, Vogue Japan’s creative director at large and a seasoned stylist. “Our contribution to carrying out the message should be direct, powerful and multiplied.”

“I’m hoping in some way we will be able as stylists to still attend pre-productions of shows, within new guidelines. The process really gets disrupted when you can’t work with the pieces in person, feel the fabrics and make small amendments,” noted London-based stylist Alexandra Karl, whose clients include Louis Vuitton, Self-Portrait and Nanushka, among others.

An early adopter of the social media revolution herself and a longtime supporter of novelty, Dello Russo acknowledged digital fashion presentations are required to be grand spectacles to succeed, as they reach a much bigger crowd and also have to be more immediate to catch the audience’s ever-shorter attention span online.

Although many commentators have underscored that the alchemy of the IRL fashion show cannot be replaced, nor should it be, “on the other hand, looking to the future, I see it [digital] as a great opportunity especially for the younger brands,” Dello Russo offered. She credited Balmain’s Olivier Rousteing for having tackled the digital revolution and flanked the IRL experience with virtual initiatives, allowing the house to reach its 10 millions followers on Instagram, as opposed to the 600 people attending a regular fashion show.

“People will be excited by the challenge to produce films and virtual events. I don’t think it’s a question of spending huge amounts of money — it’s more about taking the new challenges as a plus and trying something new,” concurred Katie Grand, founder and editor in chief of Love magazine, and a stylist who plays an essential role in Marc Jacobs’ creative process and who regularly contributes to Miu Miu’s runway shows.

“It’s impossible to compare the new with what we had become used to, they’re two completely different experiences — previously it was a huge group event — what we’re becoming used to now is far more solitary from it only being safe to have very few people together to create the content and as the viewer we are becoming more used to a lone feeling,” Grand said.

Karl agreed the intimate experience of a digital presentation and a more “quiet headspace” could help “digest a collection properly…ultimately giving more credit to the blood, sweat, tears the designers have shredded over the past months.”

At the same time, she believes “the emotional side of experiencing the narrative of a collection, the ambience, the sound that fills the room, the humming expectations, the anticipation, the smells — it all is a huge contributing factor to how we experience the clothes,” which cannot be replaced by digital showcases.

Dello Russo said the creative contribution that stylists have brought to the work of designers has not really changed since the advent of social media and it’s unlikely it will shift in the wake of the digital shows.

She acknowledged, “we cannot think about this new wave as a basic transposition of the IRL work to the digital screens; rather it encompasses a change in the medium and this will affect and influence the message we convey. It requires us to aim for a different creative language, and a more open one, in which unexpected ideas pop up.”

Along the same lines, Karl noted “difficult times are fertile ground for extreme outbursts of fantasy and this time of reflection will definitely have created a space from some really unexpected vehicles of how to create emotion, and make people feel again.”

In her view, “the easiest way to progress with collections, actually with any creative process overall is to really take the time to discuss ideas, to get into the mind of the designers or the brands we work with,” Karl offered.

The time required to build synergies with designers “recently has extended due to the increased focus it takes to discuss details and make sure the desired results are achieved.”

Creative solutions and unexpected ideas are what stylists expect to be generating buzz and draw interest, especially in an already oversaturated digital landscape.

Dello Russo placed her biggest hopes on the younger generation of digital-native designers, citing Central Saint Martins graduate Harris Reed as one good example of how creativity outpaced expectations. Last May, the multihyphenate designer, who uses the plural pronoun, took on every task, from design to styling and set design to debut their collection on Instagram and via Zoom — resulting in a compelling showcase.

If some observers are already pointing to the lack of emotion, vanished in the transition from physical to digital, Dello Russo had one provocative question to share: “What about hosting a fashion show on Mars?”

It’s anything but unlikely.

Thu Jul 16 , 2020
See Full Image Gallery >> Bugatti’s handling-focused Chiron Pur Sport should have been one of the stars of the 2020 Geneva auto show, but the event was canceled at the last minute due to the ongoing coronavirus pandemic. Although customers weren’t able to see the firm’s newest model in person, […] 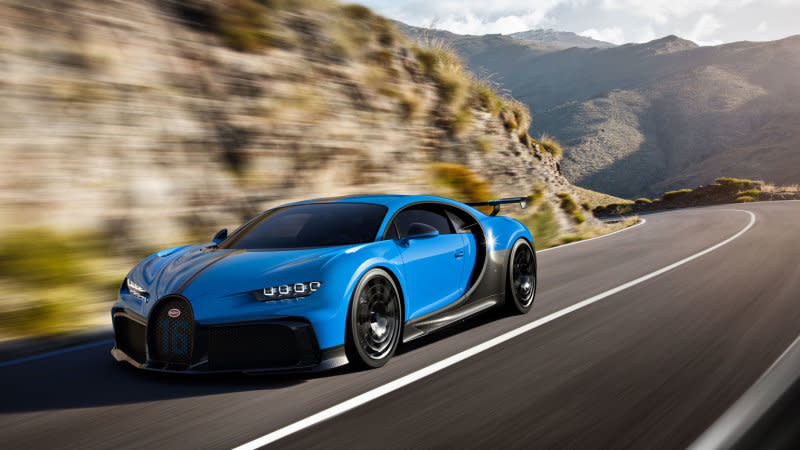