Nintendo managed to pack a dizzying amount of new Animal Crossing: New Horizons updates in its 20-minute Animal Crossing Direct on Friday. In both free and paid updates to New Horizons, there’s a lot of stuff being added to the game — not only is the museum getting Brewster and […]

Nintendo managed to pack a dizzying amount of new Animal Crossing: New Horizons updates in its 20-minute Animal Crossing Direct on Friday. In both free and paid updates to New Horizons, there’s a lot of stuff being added to the game — not only is the museum getting Brewster and The Roost, but there are plenty of new characters and features showing up on the island.

Though both of these updates will be released on Nov. 5, players will not immediately get access to all features. Anything related to the new paid downloadable content, called Happy Home Paradise, is available only to players who purchase the DLC: $24.99 by itself, or $49.99 a year with the Nintendo Switch Online + Expansion Pack.

Even without the announcement of Happy Home Paradise, Nintendo’s Animal Crossing Direct had a significant amount of updates. This is everything we know about the new, free content.

Brewster and The Roost

Coffee-slinging pigeon Brewster is opening up shop in a museum expansion: The Roost opens for business on Nov. 5. The coffeeshop is tucked away on the upper-left side of the museum, where Brewster is serving up the finest joe to New Horizons’ islanders. In the Animal Crossing Direct, Nintendo showed that coffee costs 200 bells to sip at the bar, but players can take their coffees over to tables to enjoy with visiting friends, too.

Isabelle appeared at The Roost in the clip, too — meaning that The Roost, once again, will likely become a gathering spot to better get to know more folks on the island. Other characters can be invited using amiibo cards, activated at the yellow telephone in the café’s corner.

There are plenty of Animal Crossing characters that haven’t yet made it into New Horizons, beloved favorites from older Animal Crossing games. Nintendo’s adding a few of these characters back as part of the free update — Kapp’n, Katrina, Tortimer, and Harriet.

Kapp’n is, naturally, a boat captain that ferries players to exclusive islands, all while singing his sea-faring tunes on the way. He can be found hanging out at a pier waiting to make a trip to a mysterious island: Options include one with weird plants, another that’s in a different season, and ones that are in a different time of day.

Katrina and Harriet will take up shop on Harv’s island, in the new marketplace. Harriet will give haircuts (with new options available), while Katrina will tell daily fortunes. Tortimer was shown briefly during the Animal Crossing Direct, and he seems to operate a storage cart.

Reese and Cyprus, too, will return to New Horizons in a role other than simply getting married. They’ll be able to customize items in ways that players aren’t able to otherwise. We’ll also have easier and more consistent access to New Horizons other merchants — like Kicks and Redd — through Harv’s island marketplace, too.

It doesn’t look like gyroids will be storable at Brewster’s café in New Horizons, but they’re so dang cute that it’s worth making space in your house or elsewhere around your island. Gyroids can be found and dug up around the island, but players can also “plant” gyroids and water ’em to produce more. (They’re likely to show up frequently after rain, too.)

Along with the standard gyroids, there are also plenty of different variations and customization options; Nintendo said they can be changed to match an atmosphere. Naturally, gyroids still make weird sounds, but can sync with music, too.

Players can grab their Joy-Cons and stretch along with villagers in their island plaza. And it’s not only your character — using the motion controls, players are encouraged to do the moves in real-life, too. It’s very sweet.

Building on pumpkin growing added last year, Nintendo has added at least five new crops for players to grow and harvest: wheat, tomatoes, potatoes, sugarcane, and carrots. These appear to work just like pumpkins do, and can be used in a very exciting way: Cooking!

By unlocking the Be a Chef! DIY Recipes+ item with Nook Miles, players will be able to put together food items to make new meals. In the Animal Crossing Direct, Nintendo showed sandwiches, smoothies, soups, and pasta — among plenty more new cooked food items. In essence, New Horizons is now a full-fledged farming and cooking simulator.

Most importantly, Froggy chair is back. We’re all eager to see the beloved chair back in Animal Crossing.

Ordinances can be set to make your island work better for you. There are options to slow the rate at which weeds grow and others that make your characters either get up early or stay up late.

Storage has also been contentious with New Horizons players. We just want to have more stuff! Home storage before the free update allows for 2,400 stored items. Now, players can expand up to 5,000 items via three upgrades.

New Horizons’ Pro Camera App automatically aligns the camera at eye level, and adds a tripod so that you can get into the picture yourself.

Home shapes can be adjusted, as well as the styles available, too. In the Animal Crossing Direct, Nintendo showed log, clay, and Japanese-style variations.

Last year, there were some New Horizons scandals around some players hacking “illegal fences” into the game — like the one seen around Harv’s island. Well, Harv’s fence is illegal no more: Now it’s a fencing option in the game, along with nine other fence types. Park fencing! Block fencing! Corrugated iron fencing! Bamboo fencing!

Some fencing can be customized now, also, with different color options available.

New Horizons is getting 11 new hairstyles, including Harriet’s new looks. Additionally, there are 11 new reactions, including stretching.

Previously, you could have eight bridges and eight inclines on your island. Now, you can have 10 of each.

You can hang stuff, like lighting and decorations, from the ceiling! With the upgrade, you can also make an accent wall — like one wallpaper different than the other.

Patterns designed specifically for items can be worn or used as flooring and wallpaper.

It’s so much, already, that I’m putting everything else in its own category. Nook Miles can now be redeemed for new items — like a plaza balloon wagon or game stand. A storage shed, too, is one of those new items, which is connected to home storage but can be placed anywhere on the island. It’s a nice quality-of-life feature, alongside the ABD, which is basically an ATM that can be placed around the island.

Y’all, K.K. Slider — your favorite nude singer — also has new songs, including a polka song and a vocaloid song.

Then, there are the new items and stuff to buy at Nook’s Cranny, as well as new DIY recipes, like a permanent ladder so you don’t have to carry yours around anymore. You’ll also notice that your character can now fit in narrow spaces, too. Handy!

And finally, there are new ways to interact with your island pals. They’ll invite you over, and sometimes they’ll visit you, too.

What will I get for buying Happy Home Paradise?

During Friday’s Animal Crossing Direct, Nintendo showed 10 minutes of footage from the expansion, and what we know is that it’ll send players to work on a resort island designing vacation homes for different villagers — and taking home the design tools you’ve learned on the job.

Paradise Planning is the resort developer led by Lottie, who you’ll remember from Animal Crossing: Happy Home Designer. Working with two new characters, Niko and Wardell, you’ll be tasked with creating perfect vacation homes for resort-goers. Getting to know characters looking for second homes, you’ll figure out what they want — and then you make it happen.

As part of Happy Home Paradise, you’ll learn new skills to make designing easier: stuff like adjusting room size by width or length; constructing partition walls(!), different counter heights, support pillars; adding mood lighting by choosing color and brightness; creating atmosphere with “soundscapes,” like construction work or space. Polishing furniture is a thing, now, too, and different effects will be added — a flower cart in the broadcast was polished to add sparkles, and some flowers were polished to include butterflies.

You’re paid in Poki, a new currency that can be used on the Happy Home Paradise archipelago. There’s a shop on the island for players to spend it — and it’s always stocked with rare furniture you might not be able to find otherwise.

You’ll continuously unlock more new furniture as more requests are filled, which you can bring home to your island. It looks like there’s tons of new stuff added as part of the expansion — more than enough that the expansion price feels worth it just for that. Once you’ve unlocked more furniture, Nintendo suggested going to previous clients and remodeling. Through that process, you can also suggest vacationers take on roommates, too.

Animal Crossing players have been designing restaurants, cafes, and libraries since New Horizons was released, but now we’ll have designated spaces for it on the Paradise Planning island. These vacant buildings can be turned into schools, restaurants, and hospitals. Even better, villagers will use them.

Happy Home Paradise designs can be saved in the new Nook Phone app, so you’ll be able to visit old clients and check in on things. These can also be shared online — giving players the ability to visit other designer’s creations.

Bring these tools back to your island

All of the new design techniques learned in Happy Home Paradise can be used on your own home on your island. If you want your own islanders to check out the vacation spot and make new spaces for them, you can encourage them to head over there by gifting souvenirs. (Room size adjustments, Nintendo said, will not be available on your home island.)

Later, players will be able to remodel homes on their island itself.

What if I cancel my online subscription and no longer have access to Happy Home Paradise?

Nintendo told press that players that cancel their Nintendo Switch Online+ Expansion Pack subscription will no longer have access to Happy Home Paradise’s archipelago, where vacation homes are designed. However, players will keep access to the new furniture items they’ve unlocked, Nintendo said. Save data will be stored on consoles, though, if a player chooses to subscribe again.

Along with keeping furniture items, players will also be able to keep design features, like the ability to add partition walls and ambient lighting.

What about the new villagers?

Nintendo hasn’t clarified how New Horizons players can access the new villagers, more than a dozen of which were shown during the Animal Crossing Direct. Specifically, Nintendo shared a photo of new amiibo cards to be released on Nov. 5 — showing new characters like Shino the goat, Zen the anteater, and Sasha the bunny. Eighteen new characters were shown — alongside Niko and Wardell — on these amiibo cards, but Nintendo hasn’t said whether they’ll be available to randomly move onto your island, or if they’re only addable via amiibo cards.

We’ve reached out to Nintendo for clarification.

Mon Oct 18 , 2021
TAMPA, Fla. — What started out as one, turned into more than 100 during the pandemic. However, if you ask this Tampa artist you can’t have enough when it comes to gnomes. John C Marsh Jr. isn’t exactly Dr. Frankenstein, but he is bringing imagination to life inside his south […] 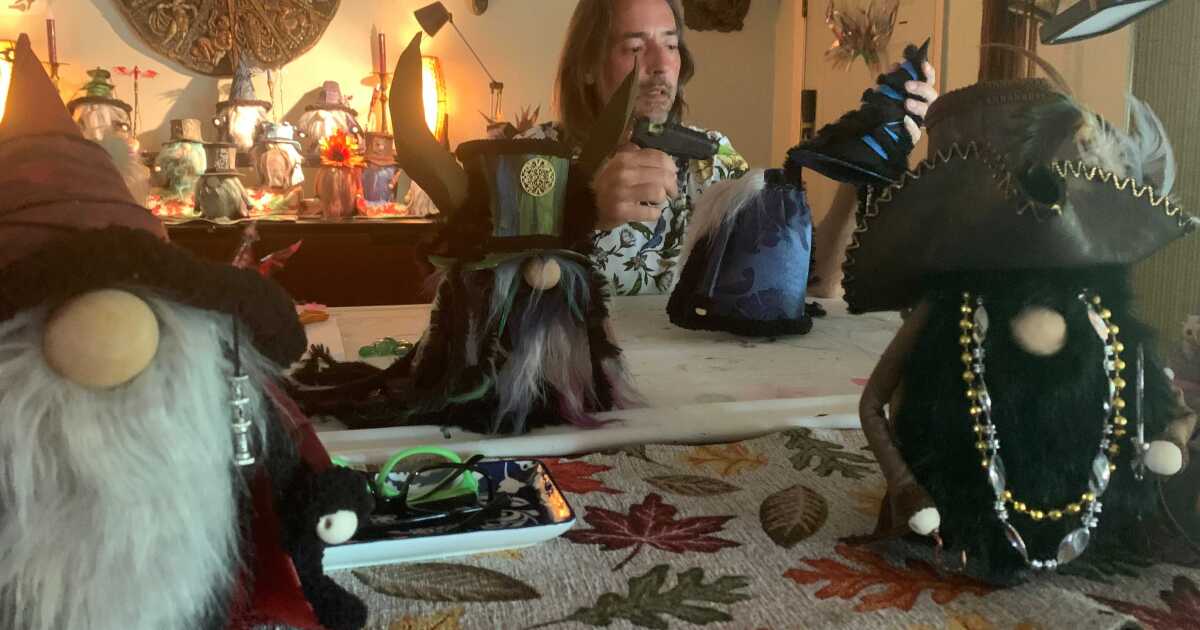