Among Us developer Innersloth announces the game will once again celebrate Halloween with the return of its seasonal hats and map decorations.

This October, Among Us is celebrating Halloween with the return of its seasonal hats and map decorations. The 2018 social deduction game exploded in popularity last year after it became a Twitch and YouTube phenomenon. While the popularity of Among Us has waned since its peak last year, it still has plenty of active players and possibly many more potential ones who are waiting for new content updates and events.

Among Us developer Innersloth’s small indie team is currently busy working on new content for the game. In June, the studio not only expanded Among Us lobby size to 15 players, but it also detailed plans for future updates. Some of these include highly requested features like account linking allowing for cross-platform play using the same account, new roles and game modes, a fifth Among Us map, and more. Additionally, Innersloth recently revealed it’s working on accessibility features for Among Us to better accommodate players of all ability.

The Among Us Twitter account announced the return of the game’s spooky items to its PC, Switch, and mobile versions. The Halloween-themed hats include the likes of bat ears, a hockey mask akin to Jason Voorhees of Friday the 13th fame, demon horns, a plague doctor mask, and others. Those who were disappointed that the Halloween hats were eventually removed from the game after the season ended won’t have to worry this time around, as they’ll now be kept in players’ inventories for the foreseeable future. The studio also shared that Among Us’s Skeld and MIRA HQ maps will be adorned with seasonally appropriate décor later in the month.

🎃 halloween hats are back 🎃

spooky items are now available on PC, Switch and mobile 👻 the Skeld and MIRA HQ will also be decorated later this month to celebrate!!! pic.twitter.com/uCh3W1SdMj

Among Us’s Halloween-themed cosmetics are just some of the many cosmetics that it has released so far. It’s also one of two themed sets associate with certain annual events or celebrations, with the other being the Christmas-themed bundle that was previously made available in December. Now that Innersloth has confirmed that it won’t be taking away its spooky hats even after the in-game celebration ends, it’s a strong possibility that the winter holiday cosmetics will also stay for the long term when it comes back later this year.

Re-releasing Halloween hats and deciding to make them permanent is a bright way to expand Among Us’s customization options in the long-term without having to design new ones. Letting players keep the items could also be an attempt to encourage players to return to the game for longer after the event’s end, after which new seasonal hats and decorations could theoretically be added for other occasions, such as Thanksgiving and non-Christmas winter holidays.

Next: Squid Game’s Guards Become Among Us Impostors In 3D Crossover

Among Us is available on iOS, Android, PC, and Nintendo Switch, and it will launch on PS4, PS5, Xbox One, and Xbox Series X/S in 2021.

90 Day Fiancé: Ariela Shares Her Thoughts On Taking Avi Away From Biniyam

‘It’s not sustainable’: What America’s port crisis looks like up close

Sun Oct 10 , 2021
As he speaks, another vessel glides silently toward an open berth — the 1,207-foot-long Yang Ming Witness, its decks jammed with containers full of clothing, shoes, electronics and other stuff made in factories in Asia. Towering cranes soon pluck the thousands of boxes off the ship — more cargo that […] 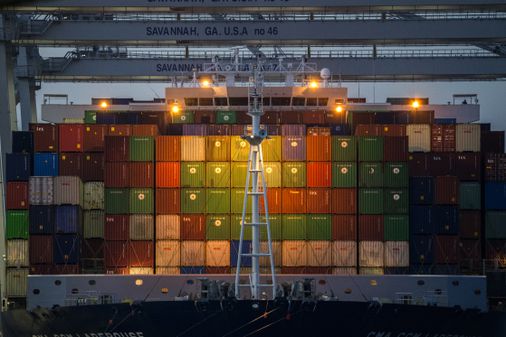