Wait, back up a second. Amid all the drama that has come pouring forth from the third season of Netflix’s Selling Sunset, almost buried underneath Chrishell Stause‘s divorce and Christine Quinn‘s grandiose wedding plans, there’s the mystery of Amanza Smith‘s missing ex-husband. Referring to daughter Noah, 10, and son Braker, […]

Wait, back up a second.

Amid all the drama that has come pouring forth from the third season of Netflix’s Selling Sunset, almost buried underneath Chrishell Stause‘s divorce and Christine Quinn‘s grandiose wedding plans, there’s the mystery of Amanza Smith‘s missing ex-husband.

Referring to daughter Noah, 10, and son Braker, 8, the interior design specialist said on the show, “I feel like I’m gonna maybe have to get full custody of them,” since she hasn’t seen their father, former NFL player Ralph Brown, in a year.

Then again, make that no one has seen Ralph Brown in a year.

About two weeks into filming, he disappeared from Smith’s life, she recalled. “We filmed for seven or seven and a half months, when he still was nowhere to be found,” she told Entertainment Tonight in a recent interview. “It’s like, this is a huge part of my life and I have cameras following me 24/7. You can’t hide it. So it’s not like I went into filming in this position.”

Meaning, she thought she was just going to be one of the well-dressed bunch on Selling Sunset, about the trials and tribulations of the staff at high-end real estate agency The Oppenheim Group, three seasons of which are streaming on Netflix.

Instead, Smith—who joined the show in its second season, which premiered in May—told ET that Aug. 26, 2020, would make it a year since she last saw him.

“I filed a missing persons report at one point,” she said. “I hired a private investigator at one point and they never got a visual. They gave me a little insight of where they think, maybe [he might be]. I’ve reached out to every family member. I’ve had friends reach out. If I reach out to his sister and brother-in-law, the next thing, I would be blocked.” Calls, emails and texts to his brother and father have gone unanswered, she continued, but “at least 20 of his ex-NFL teammates [have reached] out to me saying, ‘Hey, have you heard [anything], we can’t get a hold of Ralph, do you know what’s [going on]?”

Even his best friend of 20 years “has no idea,” Smith said.

But Smith, who dated Taye Diggs after she and Brown split up, told ET that she figures her NFL journeyman ex must at least be alive—”because otherwise we would know.”

Meanwhile, the football world has started talking about the mystery now that Selling Sunset has brought it to light.

“From what we can tell, he’s been missing for over a year, or off the grid,” Steve Warren, a former teammate of Brown’s at the University of Nebraska, said on the Aug. 22 episode of fellow Cornhusker Adam Carriker‘s Carriker Chronicles.

Warren said he found out when he saw the ET story featuring Smith’s interview pop up online.

“As I’m reading I’m starting to think, ‘Wait a minute, she just said he’s gone and hasn’t been seen, or nobody’s heard from him, for a year?’ So I immediately started texting all of our friends and teammates that were in around our age, or guys that I know that he’s had a relationship with—and every text I sent, every message I sent, came back. The really shocking thing was everybody was in the same boat as not knowing that he’d been off the grid for that long.”

Warren continued, “I think part of that plays into what’s going on with the pandemic. And then part of it is, you know, we’re all just getting older and have families, and none of us are in the same place anymore, and you kind of lose track of people you don’t see every day.”

Brown, who was born in Los Angeles, was an All-American cornerback for Nebraska from 1996 until 1999, after which he was drafted by the New York Giants in 2000. He spent four seasons with the Giants, then moved on to stints with the Minnesota Vikings, Cleveland Browns and Arizona Cardinals until he left the game in 2009.

In July 2010, he married Smith, a former Indianapolis Colts cheerleader and Deal or No Deal briefcase model (alas, starting in 2008, after Meghan Markle had already left). They were already parents to Noah, who was at her mom and dad’s wedding in Indianapolis, and son Braker was born in 2011.

It’s unclear when they split up (reports say 2012), but Smith told London’s Metro in May that when they did divorce, her longtime friend (and now boss) Jason Oppenheim “literally co-signed an apartment for me and my kids. I was getting turned down right and left and he’s like, ‘As long as you pay the rent on time, it’s fine.'”

She continued, “I decided to start my real estate career to provide for my family. I have two amazing kids. I’ve been a single mom since they were one and two, they’re now eight and nine. When I met my ex-husband he was playing in the NFL. It was pretty comfortable. When we separated, my ex unfortunately couldn’t even pay child support.”

Smith was first seen publicly with Diggs in 2014, the same year his divorce from Idina Menzel was finalized, and dated the actor for about four years, breaking up in 2018.

When Smith joined the show she was already a good friend of Selling Sunset‘s Mary Fitzgerald (who was seen selling Diggs a house in season one), and she mentioned in season two that she didn’t know where her ex was. But the upsetting turn of events was more prominently featured in season three.

Smith talked about sharing joint custody with Brown—until he disappeared—and how she was finding it difficult to get the court to grant her full custody.

“At this point, legally we still have 50-50, but I don’t know where he is,” she acknowledged. “So I need to be able to make decisions without his signature and his approval.”

In July, Smith posted a picture of herself with Noah on Instagram, writing, “The reason for everything! My babies! I will always protect you and never leave your side! Thank you for being the most amazing gift on the planet!” She included a series of hashtags, including “#singlemom.”

They also added a dog to their household, Smith posting a series of photos in June with the caption, “This was the best I could do! Dogs are harder to get a shot of then even kids! Meet Bowie!”

But when the third season of Selling Sunset dropped this month, she was prepared for questions about the inexplicable situation she finds herself in.

“It’s the most bizarre, heartbreaking…” she said while talking to ET, pausing for a second. “For my kids, because it’s not just their dad, it’s that whole side of the family has just disappeared. In my mind it’s like, okay, if he’s had some sort of mental breakdown or—he played in the NFL for 11 years, I have to wonder if maybe it’s CTE. Those are real things, so even if that were the case…” She trailed off.

Warren said on Carriker Chronicles that no one he had spoken to had seen Brown since around July 2019, but everyone who knew him would describe him as “always the same” from one time to the next. “He’s always laughing, having a good time, upbeat, very positive. And the last time I spoke to him, it was that way. He talked about his kids and how they were doing.” Brown was in L.A. at the time, Warren said, and he had been planning to see Brown on a trip out there but didn’t get a chance to.

“Ralph’s always just been a good dude, a good, solid person,” Warren said, “so to see these stories coming out and to hear that he’s missing…we’re just hoping it’s not as crazy as it seems. My hope is he just really wants to be off the grid and not want to be found, but he’s fine. Which I’m perfectly fine with. I get that, sometimes you just need to be by yourself. I’m hoping that’s the case.”

But for the ex who’s been trying to explain to her kids why they haven’t seen their father in a year, that’s not a particularly reasonable explanation at this point.

“I said, ‘Daddy’s taking this time to figure himself out and get better so he can come back and be the dad that we know he is. His brain is sick. Daddy loves you very much,'” Smith told ET.

At the end of the day, “I’ve reached out to him,” she said. “His phone is off, he has no social media, but I email and say—I go from being [she mimed scales tipping back and forth] angry to just really sad. It’s like this [roller coaster motion with her hand]. Because I’m picking up the pieces and mending little broken hearts.”

Useful Items To Enhance Your WFH Skills This Fall

Wed Aug 26 , 2020
For some, working remotely has become a way of life over the past few months. But, no matter how long we’ve been taking Zoom calls from our kitchens, the shift from office desk to home desk is still not the most natural of transitions. Luckily, there’s a ton of virtual […] 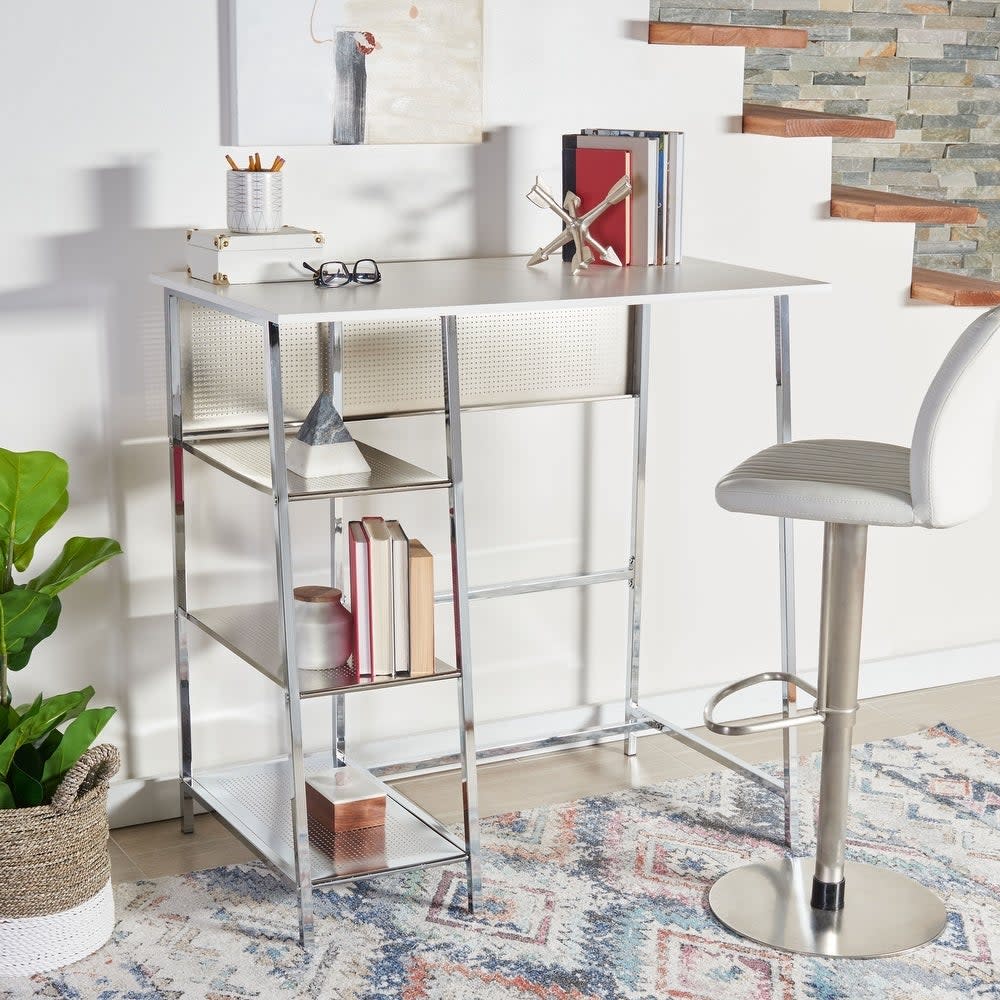