SUDBURY, MASS. – Tremont Auctions’ September 27 sale was built around some significant collections, especially those from the estate of David Thomas, owner of Gebelein Silversmiths. There were more than 225 lots of silver ranging from early American to Arts and Crafts. Starting in the 1970s, Thomas also assembled a collection of early American furniture, bought from leading dealers of the time, including Israel Sack, John Walton and others.

A total of 140 lots of that collection were included in this sale. Thomas collected Chinese export porcelain decorated with the American eagle, and the sale included numerous examples. There was a collection of Liverpool pitchers with historical designs, as well as a collection of creamware with ships and historical blue Staffordshire with nautical themes. A selection of jewelry was included, as was a selection of American paintings. It was one of those paintings, a Monhegan Island winter scene, that was the top selling item of the day, finishing at $22,610. Estimates were conservative, and more than 1,000 potential bidders were watching the sale on the two online platforms in use. There were about 20 bidders in the gallery, numerous absentee bids and several phone lines were in use. Brett Downer, owner and auctioneer, moved the sale along briskly, averaging close to 85 lots an hour, resulting in a satisfying gross for the day of about $464,000.

“Blue Snow,” a scene on Monhegan Island in winter by Andrew Winter (1892-1958), was the highest priced item in the sale, finishing at $22,610. Born in Estonia, Winter was best known for his scenes of the Maine coast in winter. In his early years, he worked on sailing ships, became an American citizen in 1921, and in 1940, he and his wife moved to Monhegan Island.

In general, paintings did well, representing half of the highest grossing eight lots. At $9,520, “Leipe,” a landscape by Danish painter Peder Mork Monsted (1859-1941), was the second highest priced item of the day. It was signed and dated 1911. A still life watercolor of flowers and fruits by Frank W. Benson (1862-1951) earned $6,545. Still lifes are not the artist’s usual subject matter. Benson is better known for his portraits and wildlife paintings and etchings. Wikipedia notes that in 2006, a watercolor by Benson was sold at a Goodwill auction in Oregon with an opening bid of $10, finally reaching $165,002.

The 225 lots of silver included Chinese export silver, early American pieces, several lots of Arts and Crafts silver and more. Makers included Gorham, Tiffany, Kalo, Georg Jensen, Arthur Stone, Gebelein, Joseph Richardson Jr and other coin silver as well. Two Richardson pieces topped the selection. Bringing $4,998 was a Richardson coin silver coffee pot, circa 1795. It was marked twice on the bottom, had an “EM” monogram, eight panels and a wooden handle. A matching teapot, with the same monogram, and also well marked, sold for $4,522. A lot of 12 coin silver spoons by the same maker sold for $893.

The Arts and Crafts silver included pieces made by Kalo. The story of the company is interesting in view of today’s emphasis on women’s rights and equality. Kalo was formed in Chicago in 1900 by six young women, all of whom were design graduates of the Chicago Art Institute. They took the name of their company from a Greek word meaning “to make beautiful.” The company produced a variety of metalwares but was best known for silver. For a short time there was a branch store in New York. The company closed in 1970. A pair of classic 12-inch sterling silver handwrought candlesticks realized $3,094. A simple 15-inch-round tray earned $1,071, and a 9-inch footed bowl brought $714.

A Simon Willard, Roxbury, circa 1790, mahogany tall case clock led the American furniture lots, earning $8,925. The case had a canopy with fretwork and three brass finials. The dial was painted with birds and flowers, and although the case had some defects, it was cataloged as being in running condition. A Chippendale mahogany wing chair, Boston, circa 1780, purchased from John Walton, had an interesting history recorded on the underside of the stretchers. “Jonas C. March and Sally Wingate, married 1795 / Jonas Died in this Chair Rochester N.H.” With a serpentine crest and scrolled arms, it realized $5,950. Bringing $4,760 was a circa 1780 Boston Chippendale oxbow chest on ball-and-claw feet. It had a molded overhanging top, four graduated drawers and original brass.

Dave Thomas, who assembled the collections, liked Chinese export porcelain decorated with the American eagle. There were numerous pieces. A pair of Nineteenth Century open handle gravy boats with finely painted floral sprays along with the eagles and detailed borders earned $1,309. Also of the same period, a heavily decorated covered tureen with undertray, reached $1,130. It had multiple eagle crests and all-over floral sprays. A circa 1800 three-piece lot of Chinese export porcelain, including a cup, a demitasse and a small dish, each decorated with unidentified ships flying blue flags, realized $1,190.

Liverpool jugs and nautical themed creamware, some with minor defects, included some interesting examples. A circa 1820 creamware plate with a transfer of Zebulon Pike and a hand painted border brought $1,130. Pike, for whom Pike’s Peak is named, was a participant in several Jefferson-era exploring expeditions and wrote a book, published in 1810, about his adventures that sold very well and was translated into Dutch, French and German. He was killed during the War of 1812. An uncommon 10-inch monogramed plate, marked Herculaneum, circa 1810, with a memorial to George Washington, reached $446. A Liverpool jug with a memorial transfer of Washington on one side and sailing ship on the other led the historical ceramics selection, finishing at $1,547.

After the sale, Downer said he was pleased with the results, noting that few items were passed. He said, “We did well with the silver from all periods, and the brown furniture did well. Mirrors with reverse painted panels did well. It wasn’t like the old days; there were never more than 18-20 people in the gallery at any one time although several came and went, depending on what was being sold. The online activity was strong with more than 10,000 potential buyers registered on the two sites we used. There were more than 275 successful bidders for the 616 lots we had. The gross, a little over $464,000, was pretty much where we thought it would be. So, overall, I have to say everybody here is pleased with the outcome.”

Prices given include the buyer’s premium as stated by the auction house. For more information, 617-795-1678 or www.tremontauctions.com.

Made in Connecticut, circa 1760, a Queen Anne cherry high chest of drawers with a scrolled crest reached $3,094. 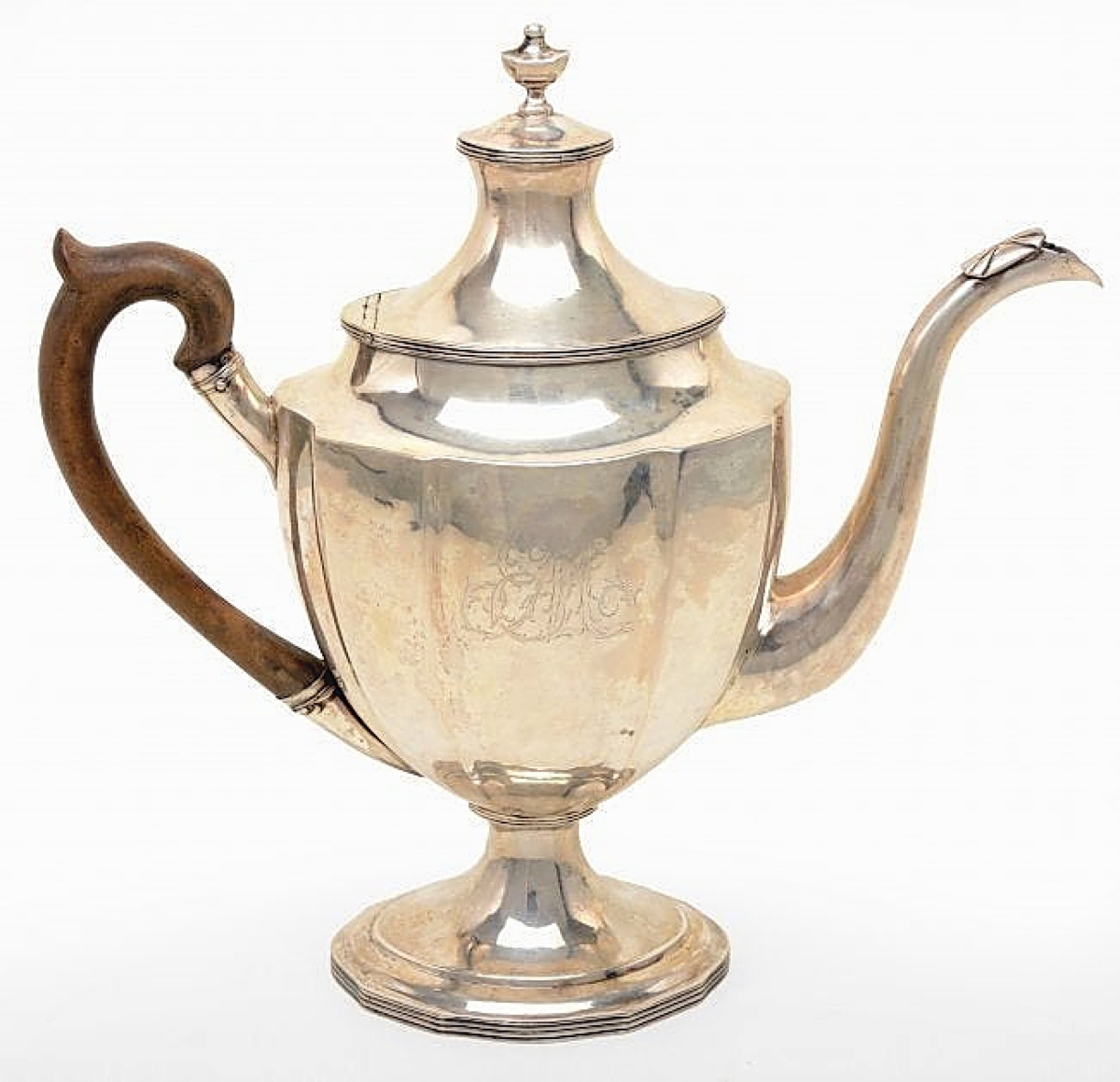 Two Joseph Richardson Jr pieces topped the silver selection. Bringing $4,998 was this eight-panel Richardson coin silver coffee pot, circa 1795. It was marked twice on the bottom and had an “EM” monogram. A matching teapot with the same monogram and also well marked sold for $4,522. 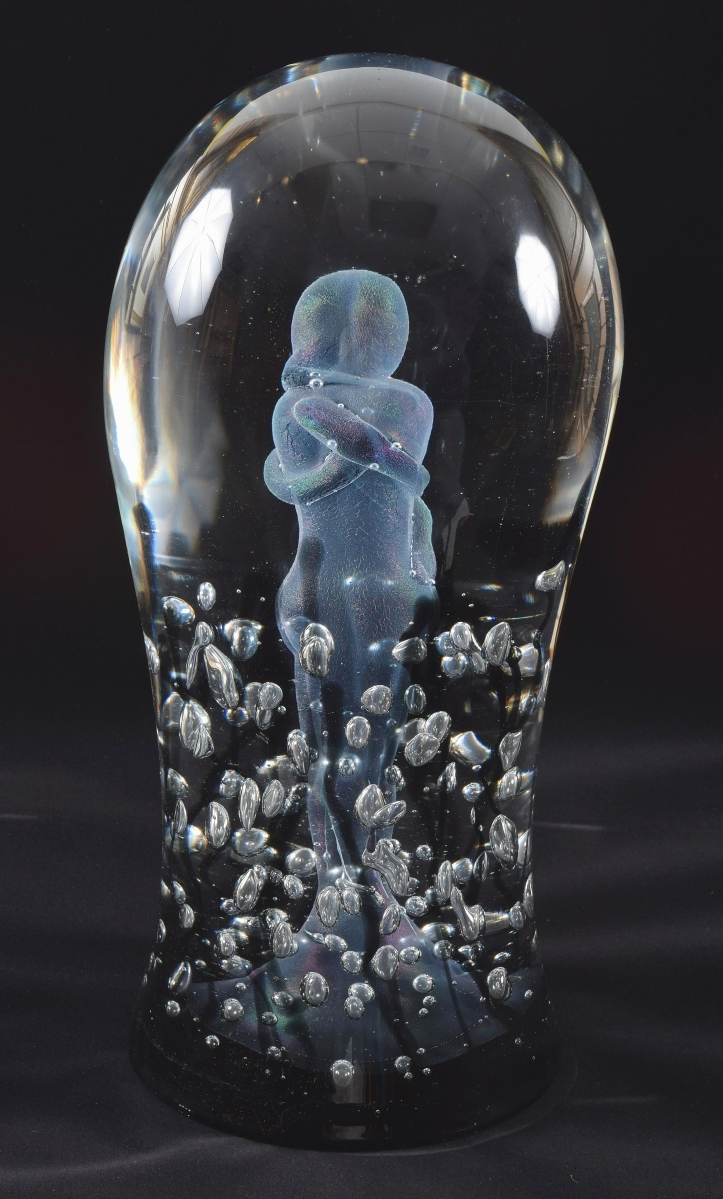 There were numerous lots of Chinese export porcelain decorated with the American eagle. A pair of Nineteenth Century open handle gravy boats with finely painted floral sprays along with the eagles and detailed borders earned $1,309. 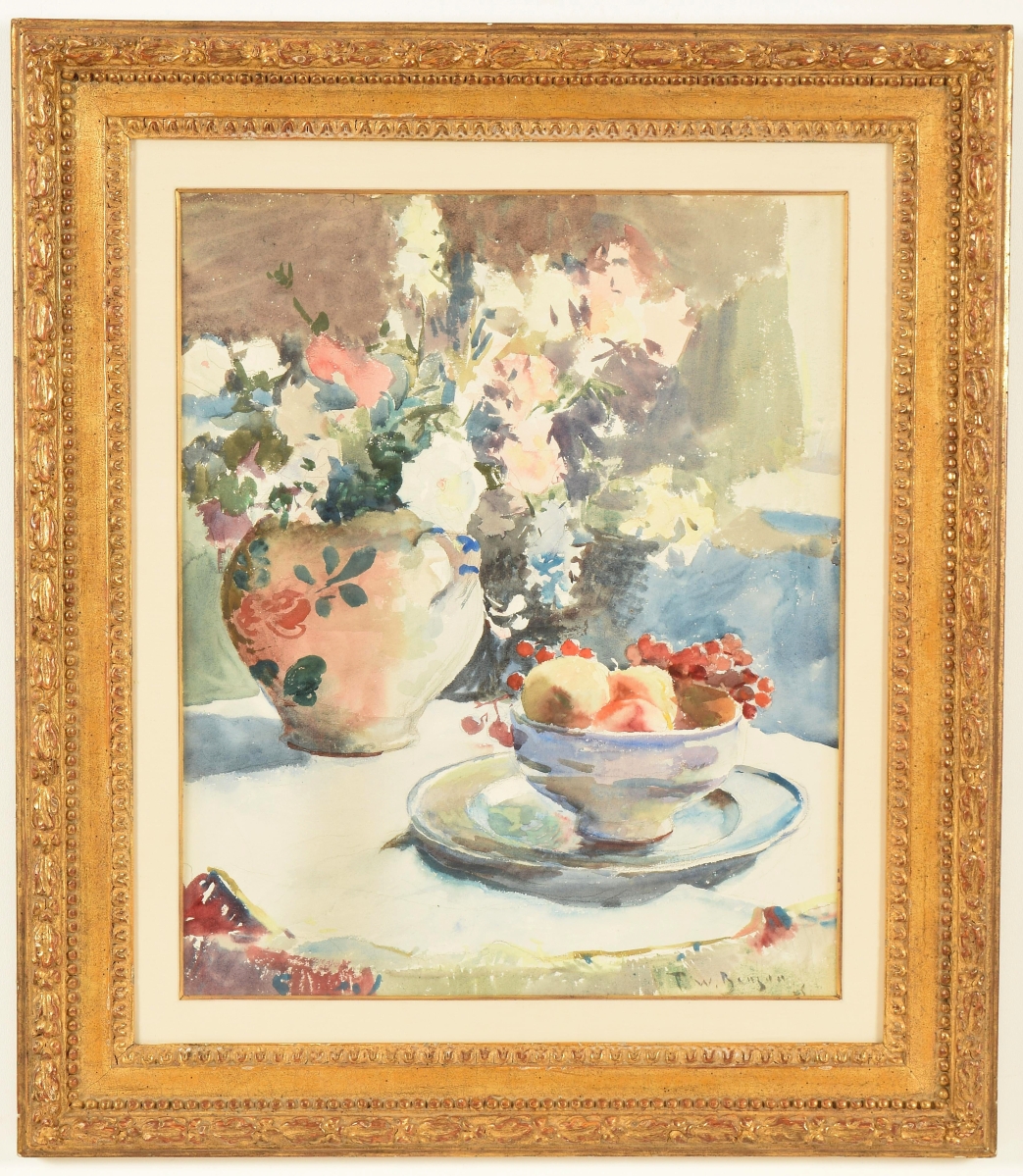 Still life paintings by Frank W. Benson are uncommon. He is better known for portraits and wildlife art. This watercolor of flowers and fruit realized $6,545. 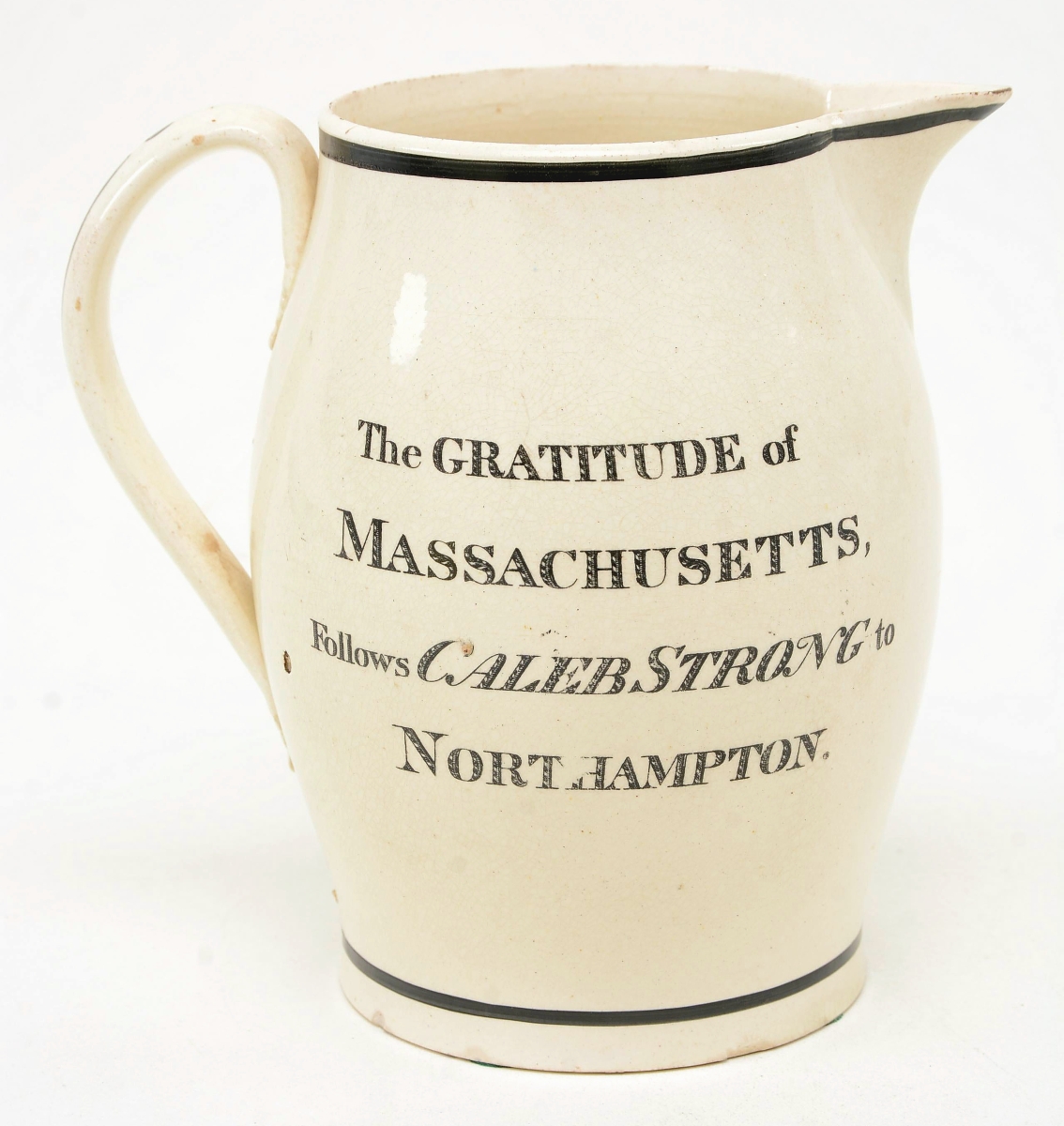 The several Liverpool jugs included one with a Massachusetts commemorative slogan “The Gratitude of Massachusetts, follows Caleb Strong to Northampton / Success to our New Governor, General Brooks.” It sold well over the estimate, finishing at $2,618. 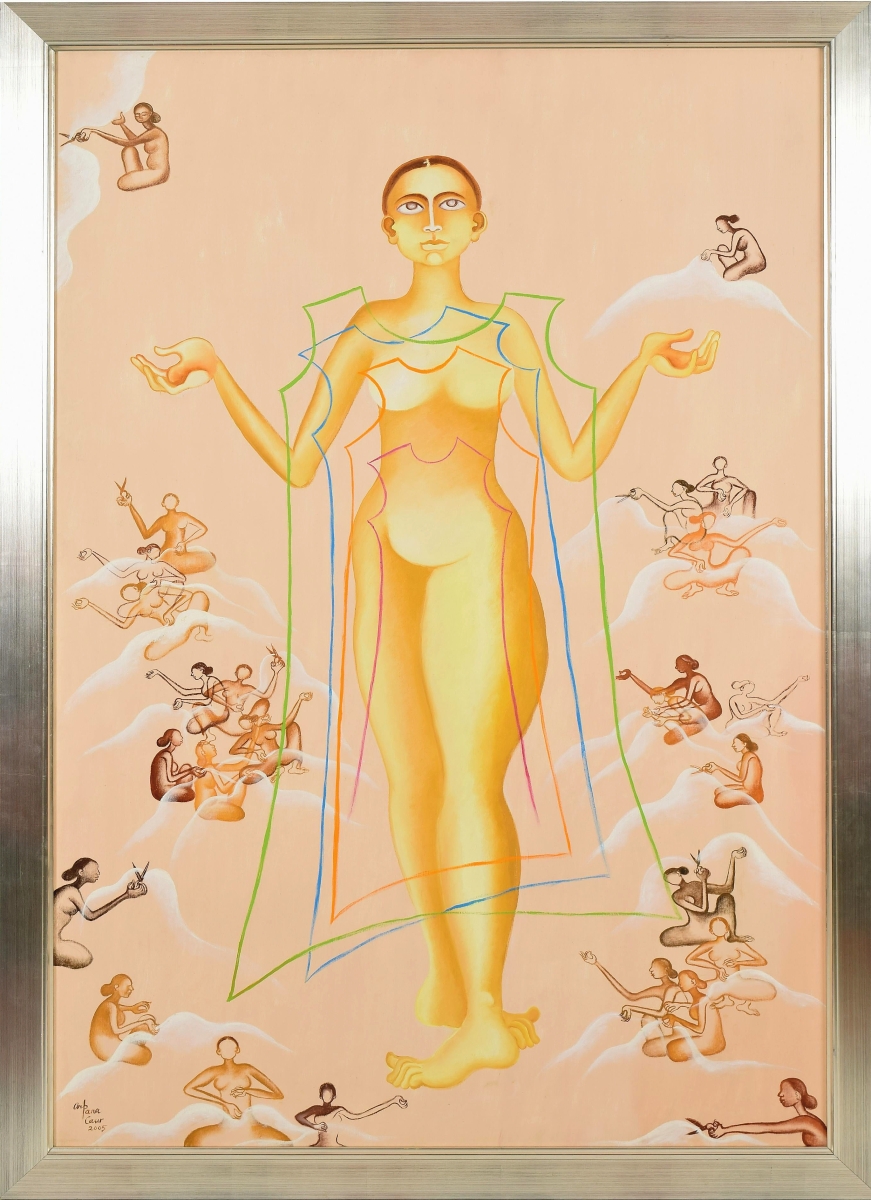 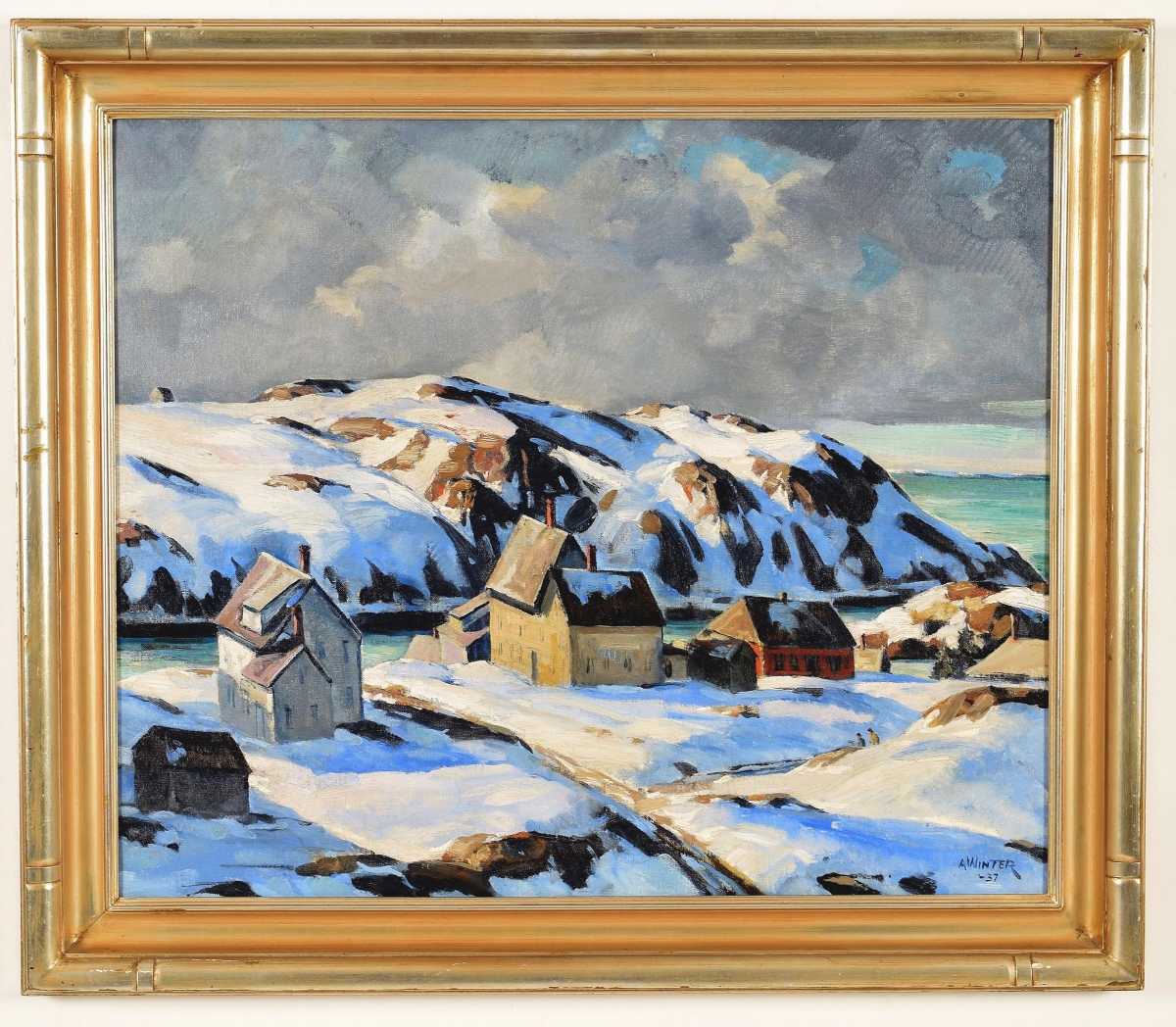 Brett Downer said his favorite item in the sale was “Blue Snow,” a scene on Monhegan Island in winter by Andrew Winter. It was the highest priced item in the sale, finishing at $22,610. 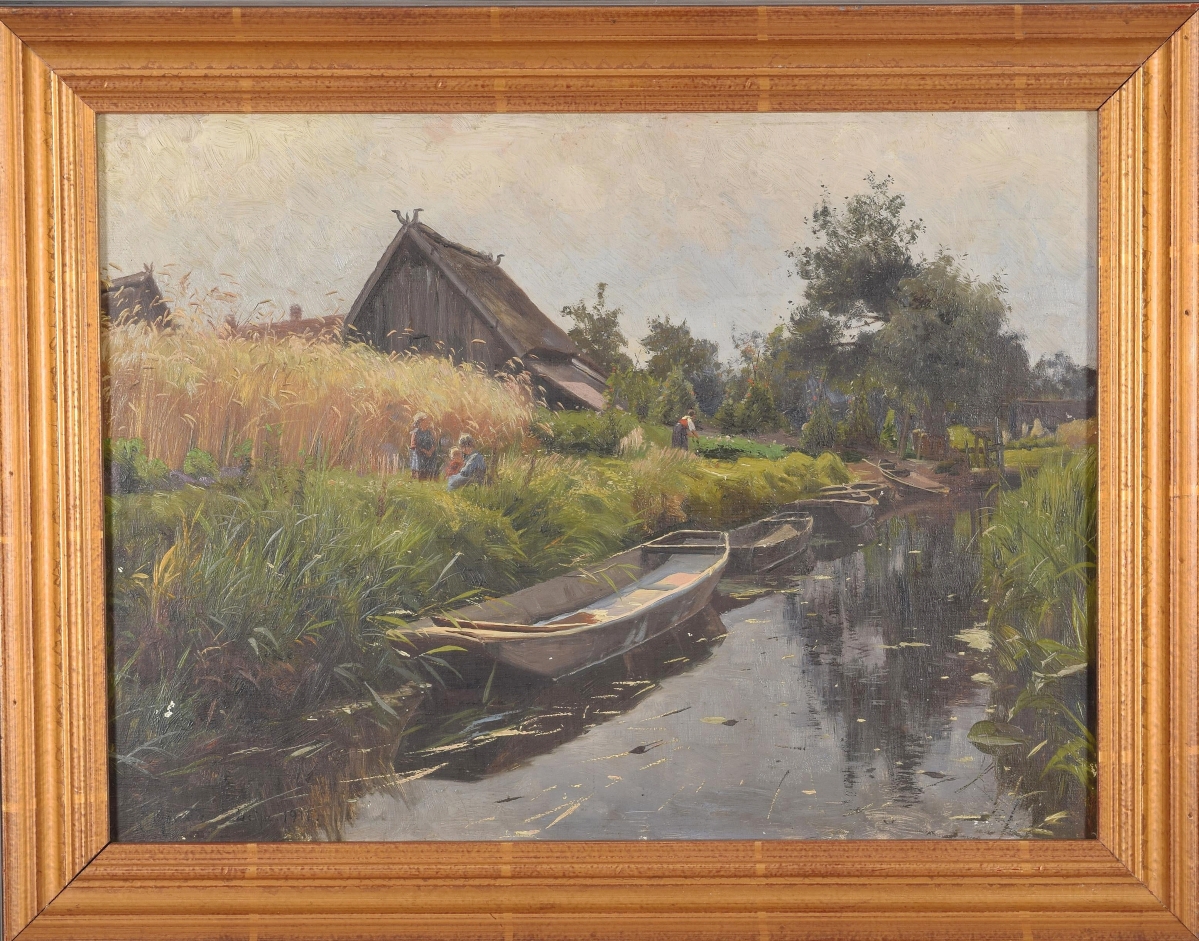 At $9,520, “Leipe,” a landscape by Danish painter Peder Mork Monsted, was the second highest priced item of the day. It was signed and dated 1911. 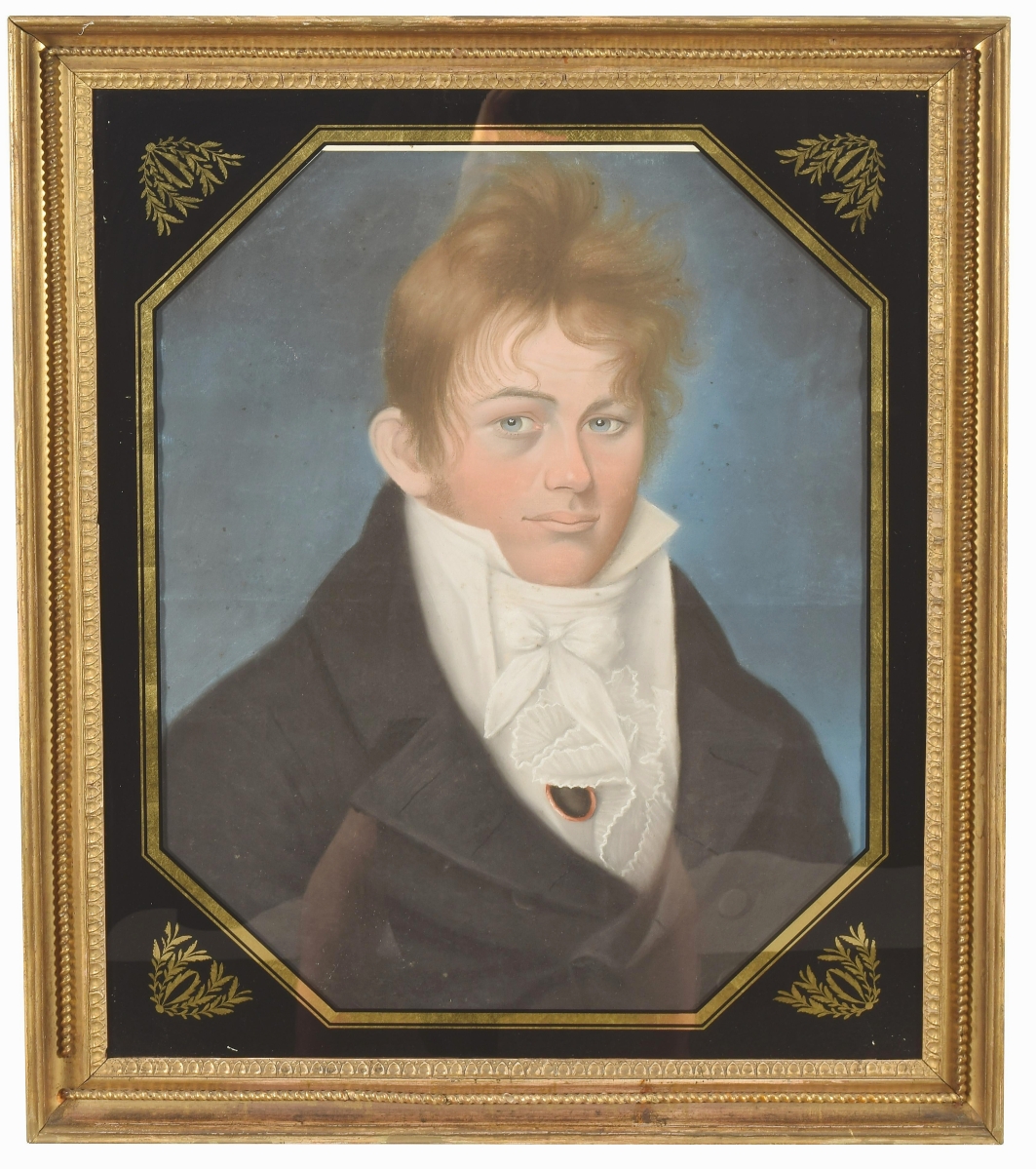 A pastel portrait of American seaman James Hall, Portsmouth, N.H., was one of the first items sold. Framed and glazed with reverse painted black and gilt glass, it had been bought at a Northeast sale in 2003 and sold for $2,856. 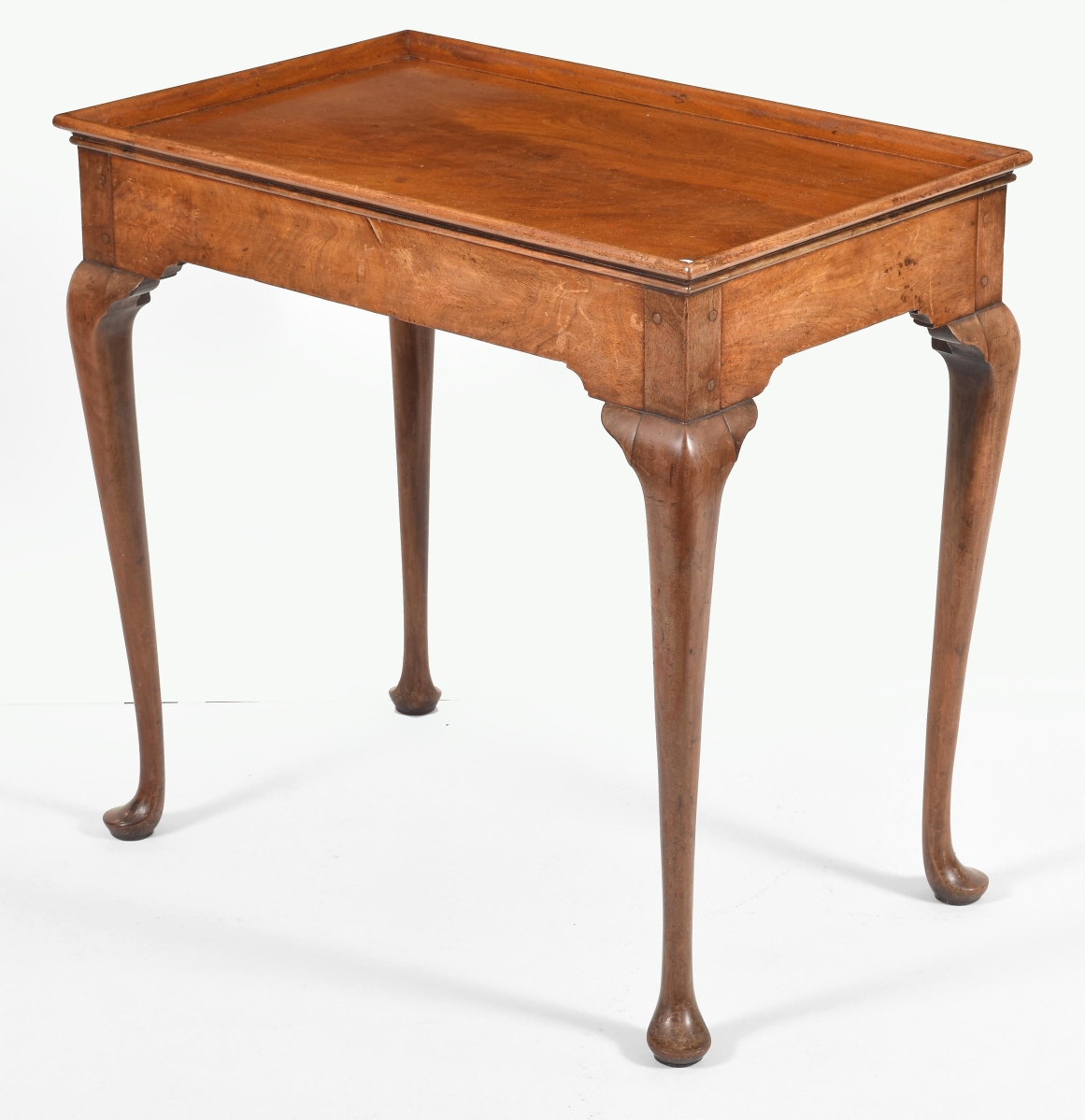 Made in Connecticut, circa 1750, a Queen Ann mahogany tea table with an applied molded edge to the rectangular top sold for $4,760. 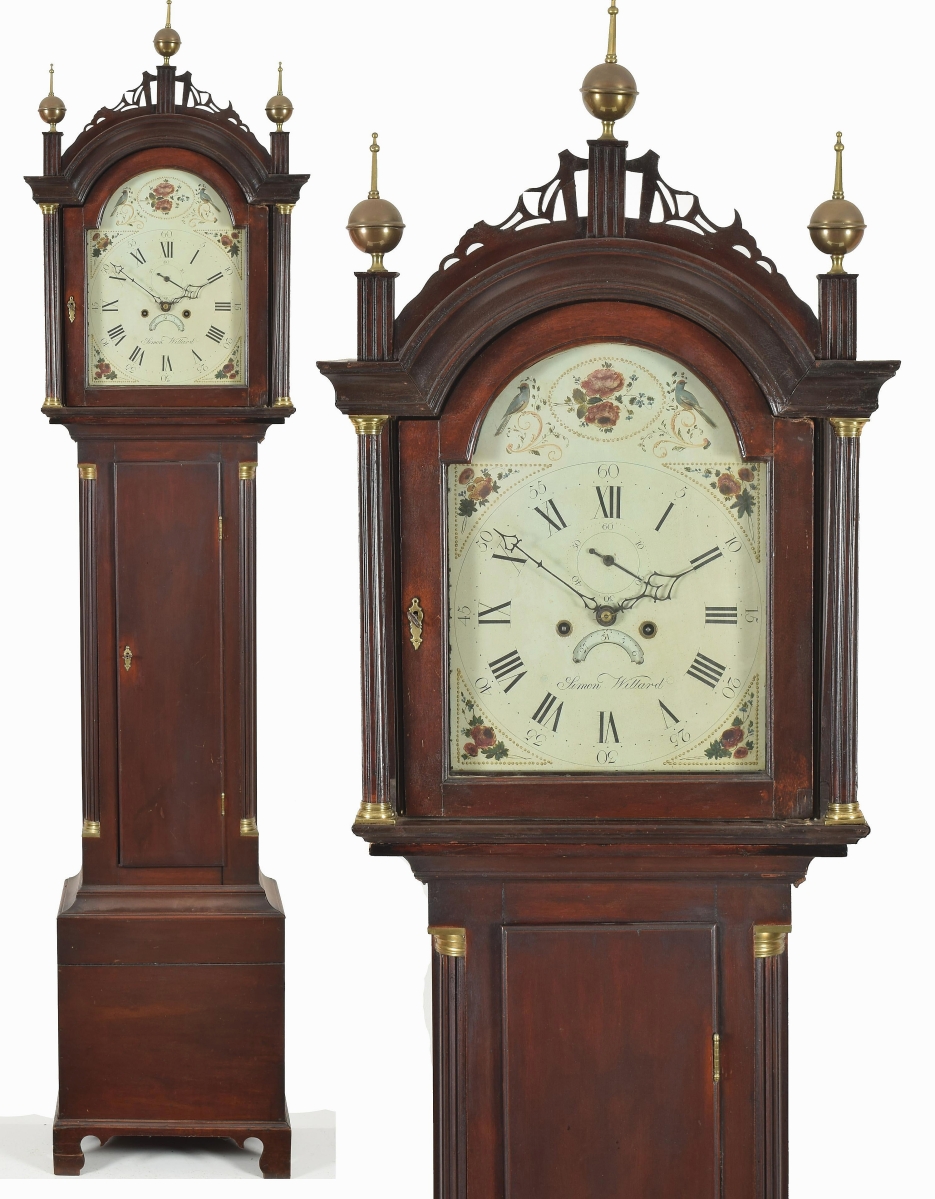 Simon Willard’s circa 1790 mahogany tall case clock led the American furniture lots, earning $8,925. The case had some defects but the clock was cataloged as being in running condition. 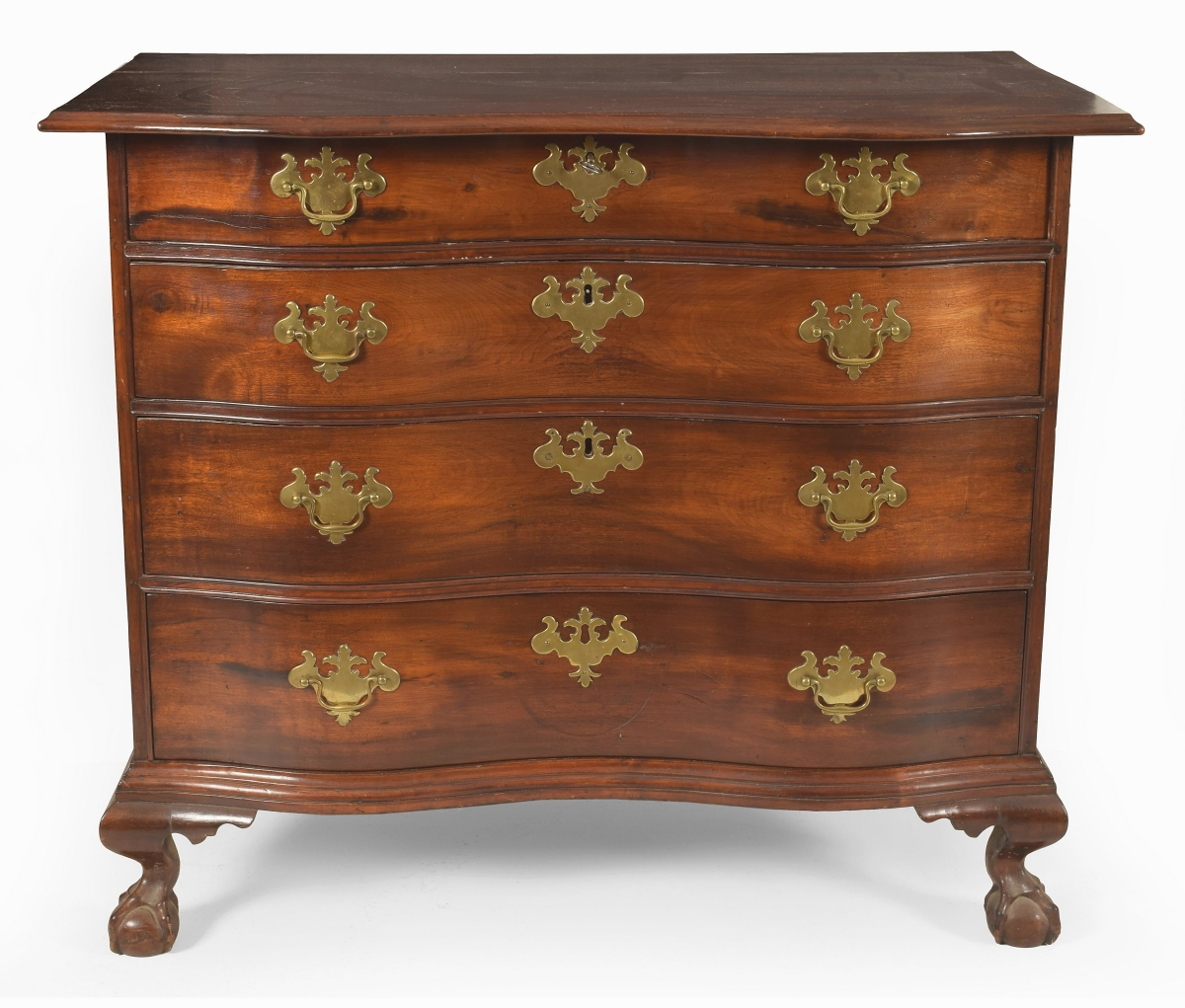 The sale included numerous pieces of early American furniture, mostly bought from the leading dealers in the 1970s and 1980s. Bringing $4,760 was a circa 1780 Boston Chippendale oxbow chest on ball-and-claw feet. It had a molded overhanging top, four graduated drawers and original brass. 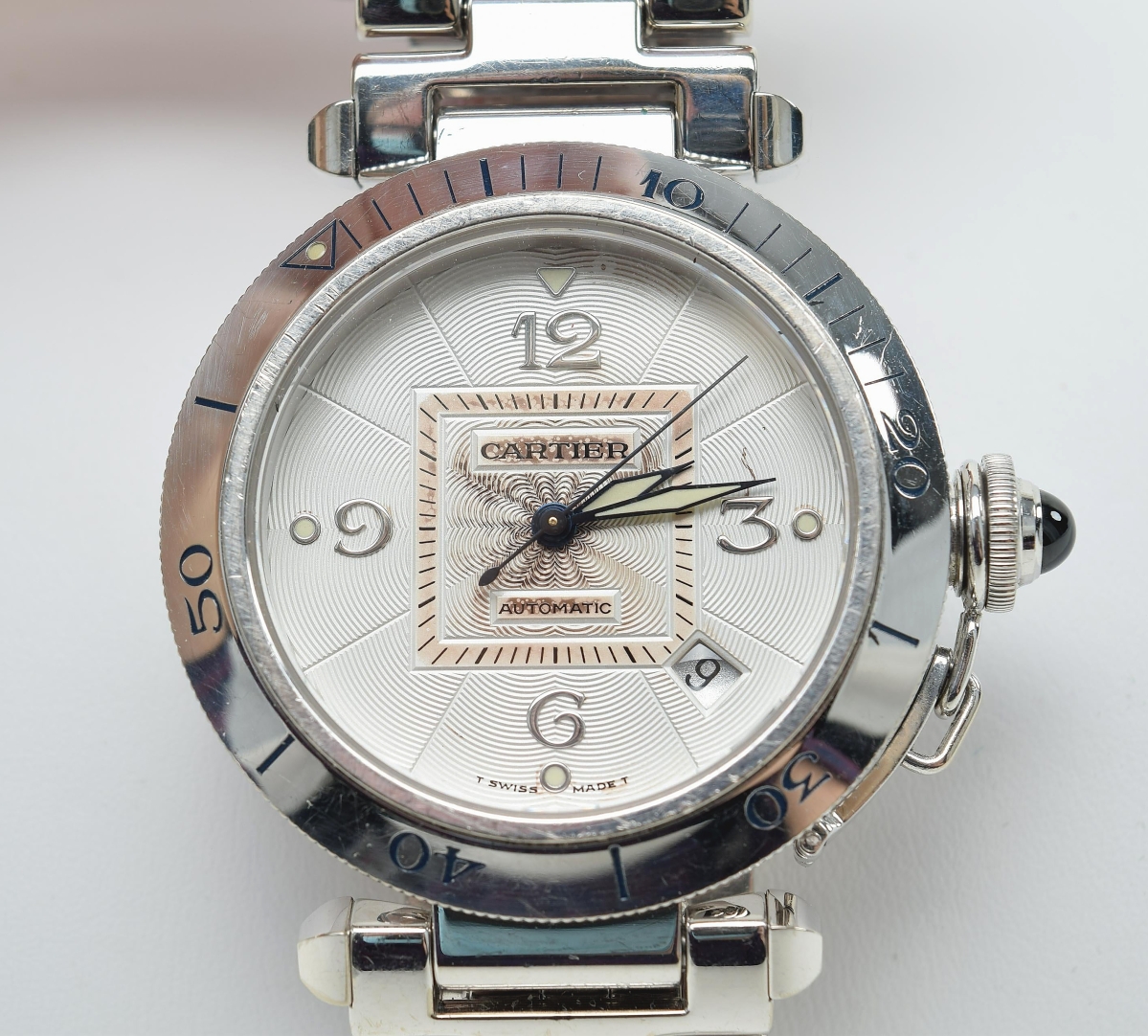 Jewelry included a selection of watches. This 18K white gold automatic Cartier Pasha exhibition model had an open back, visible movement and a silver dial. It earned $6,545. 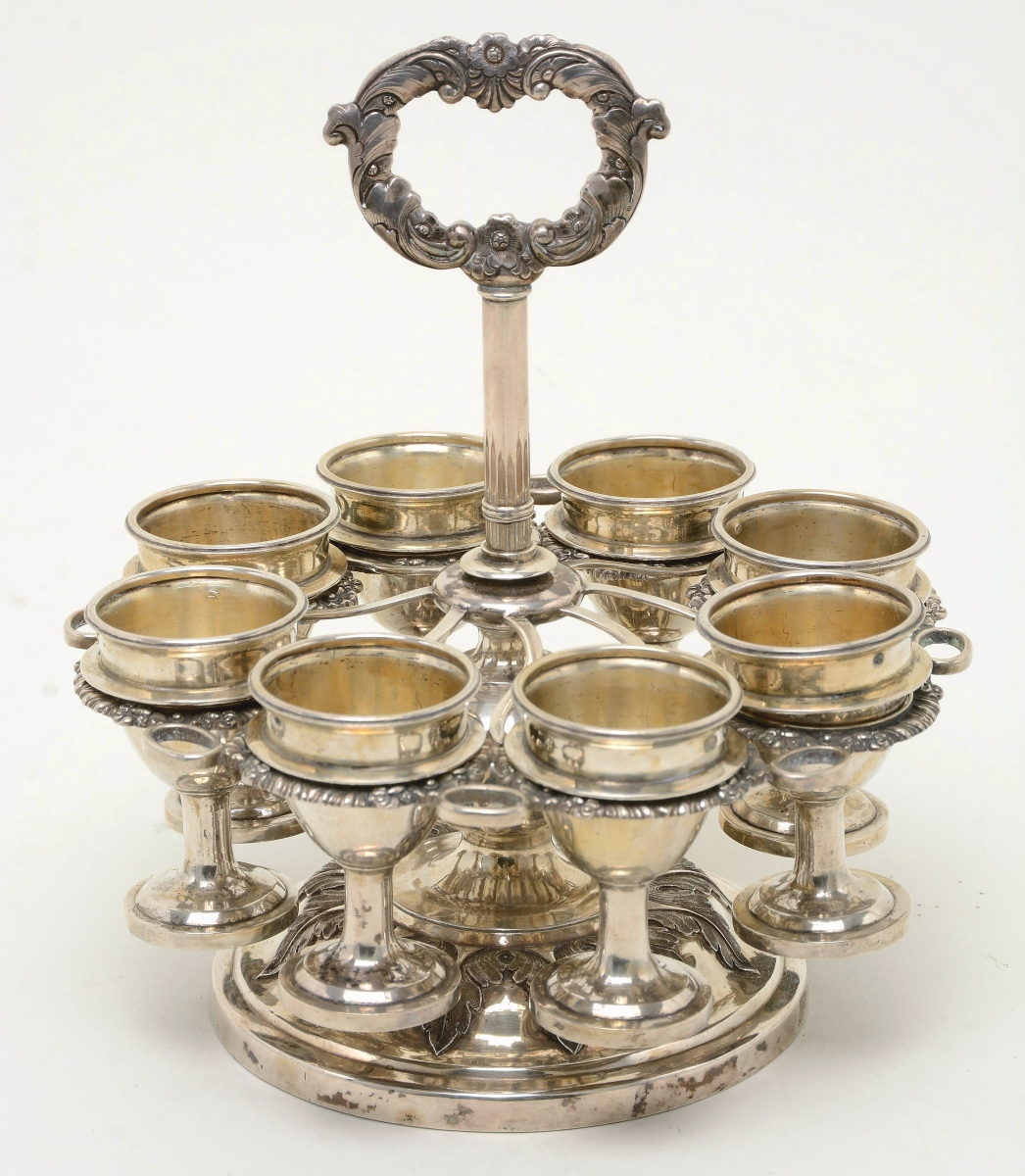 From the estate of Crosby Forbes, author of the essential book on Chinese export silver, this eight-cup egg set by Wongshing, circa mid-Nineteenth Century, had floral repousse decoration on the base. It sold for $2,380. 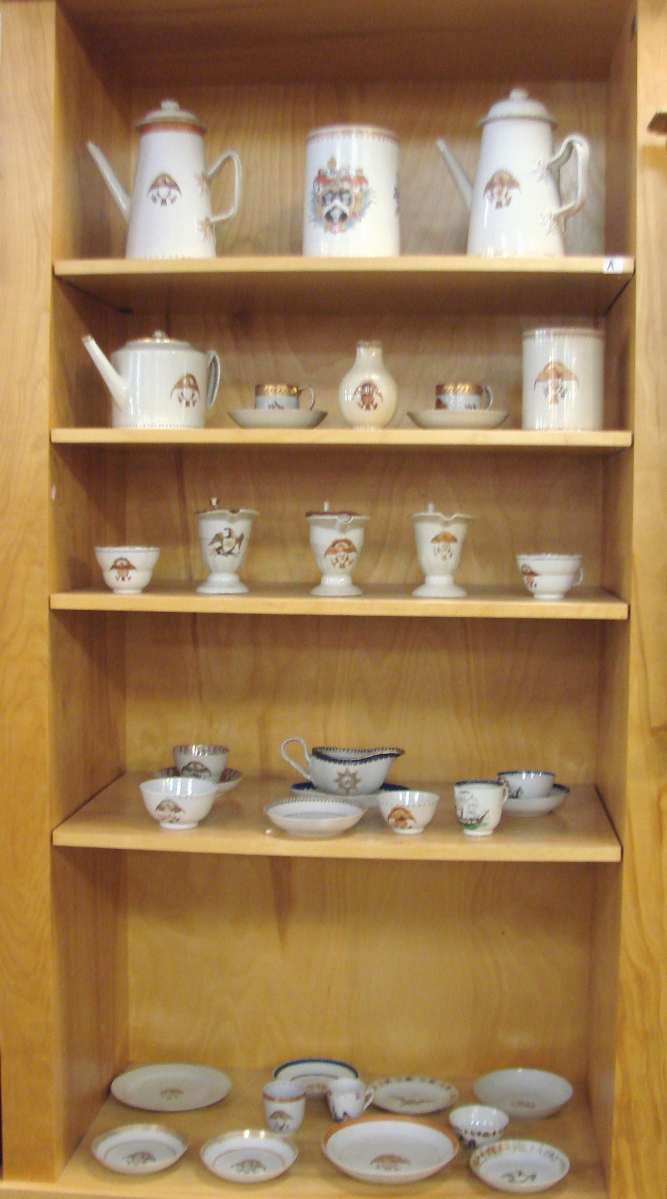 Dave Thomas, whose collections comprised a major portion of the auction, particularly liked Chinese export porcelain decorated with images of the American eagle. Shown here is a portion of the selection. 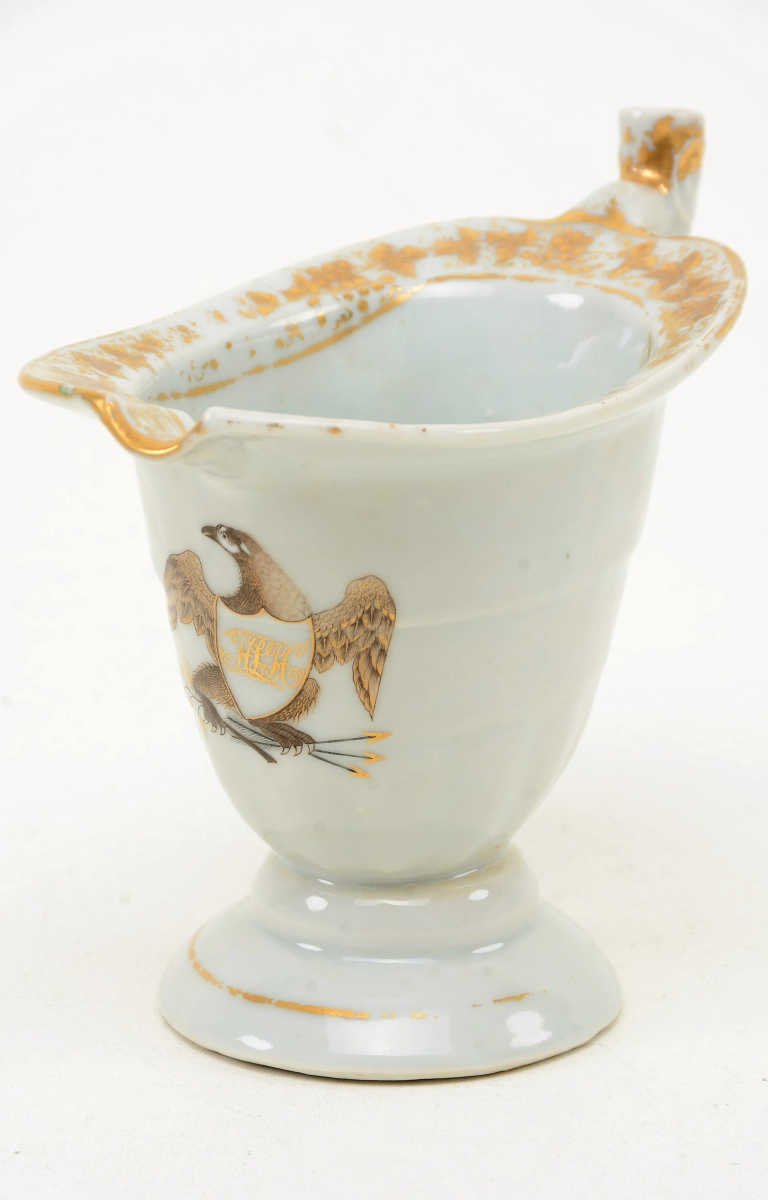 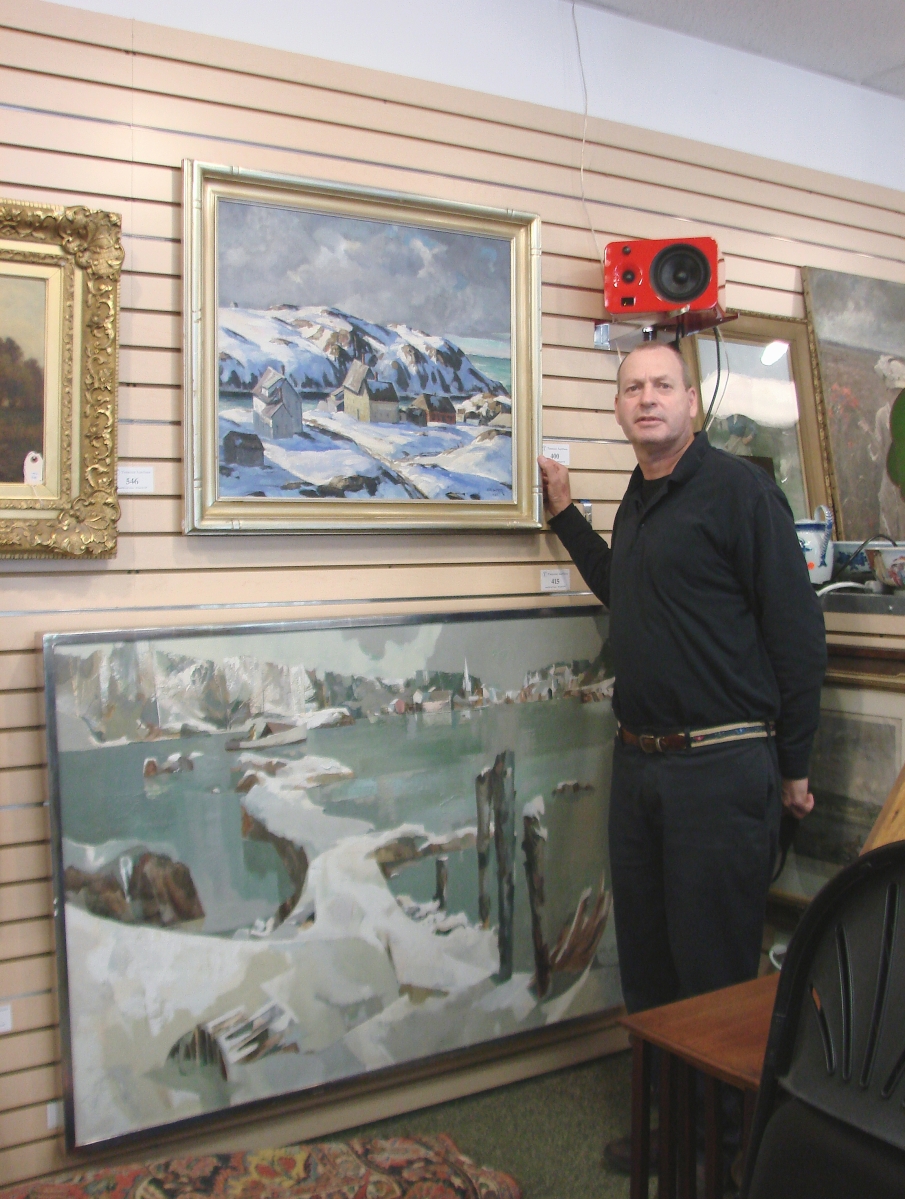 When Brett Downer was asked which was his personal favorite item in the sale, he quickly selected “Blue Snow,” this Monhegan Island winter scene by Andrew Winter. It turned out to be the highest priced item in the sale. 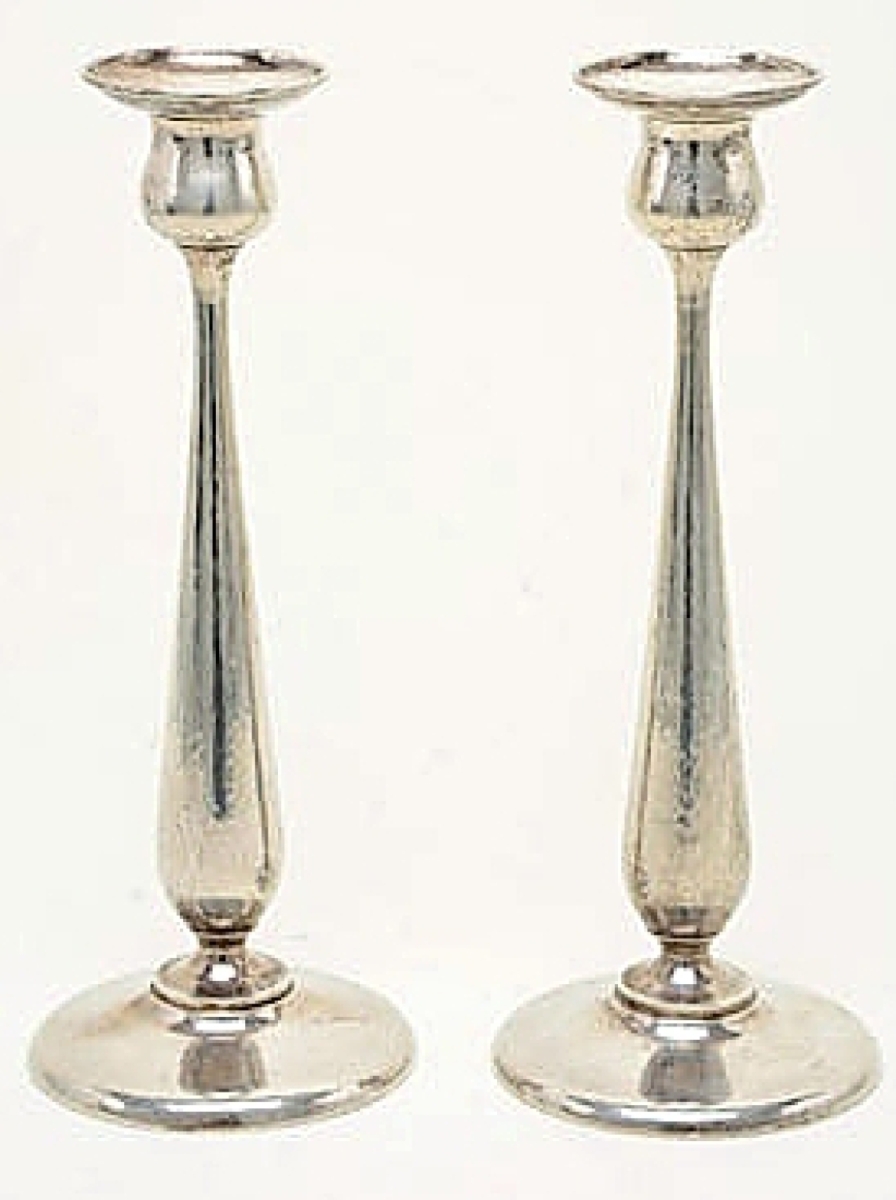 The silver collection included several Arts and Crafts pieces. This 12-inch pair of candlesticks by Chicago’s Kalo brought $3,094. A simple 15-inch round tray by Kalo earned $1,071. 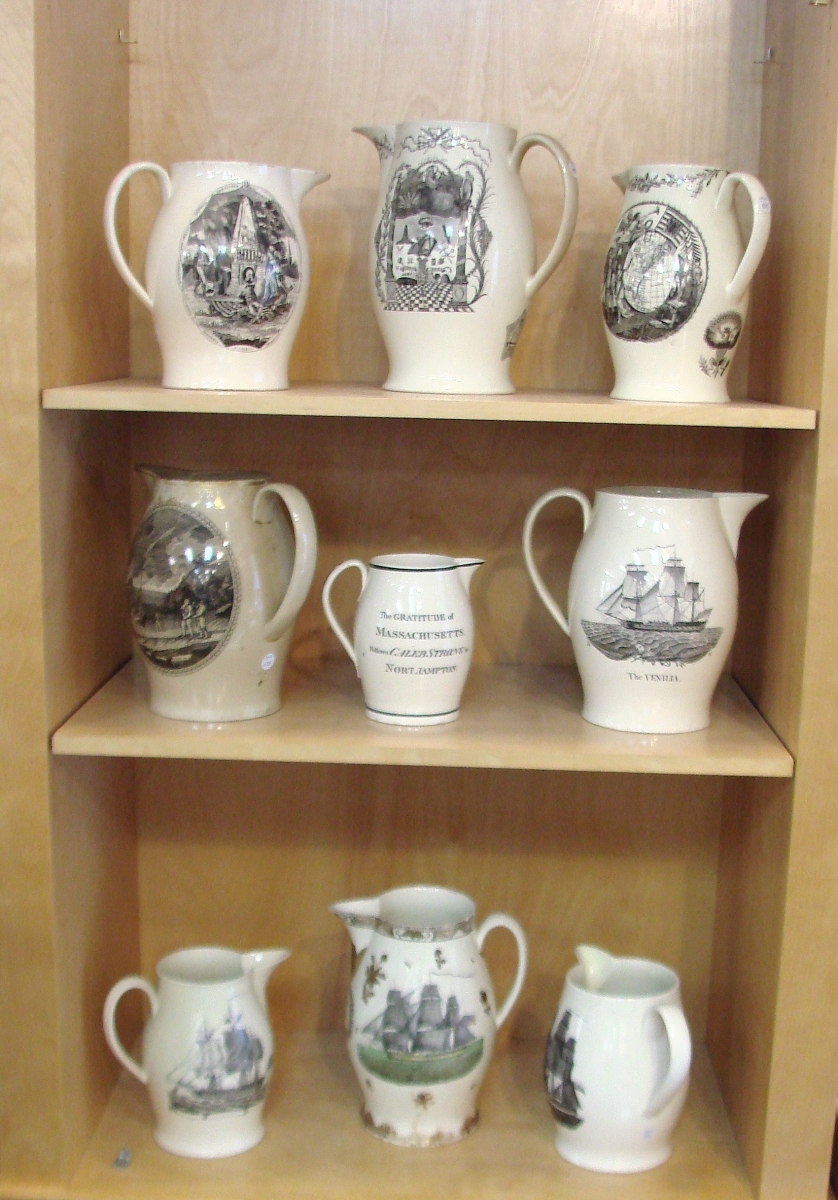 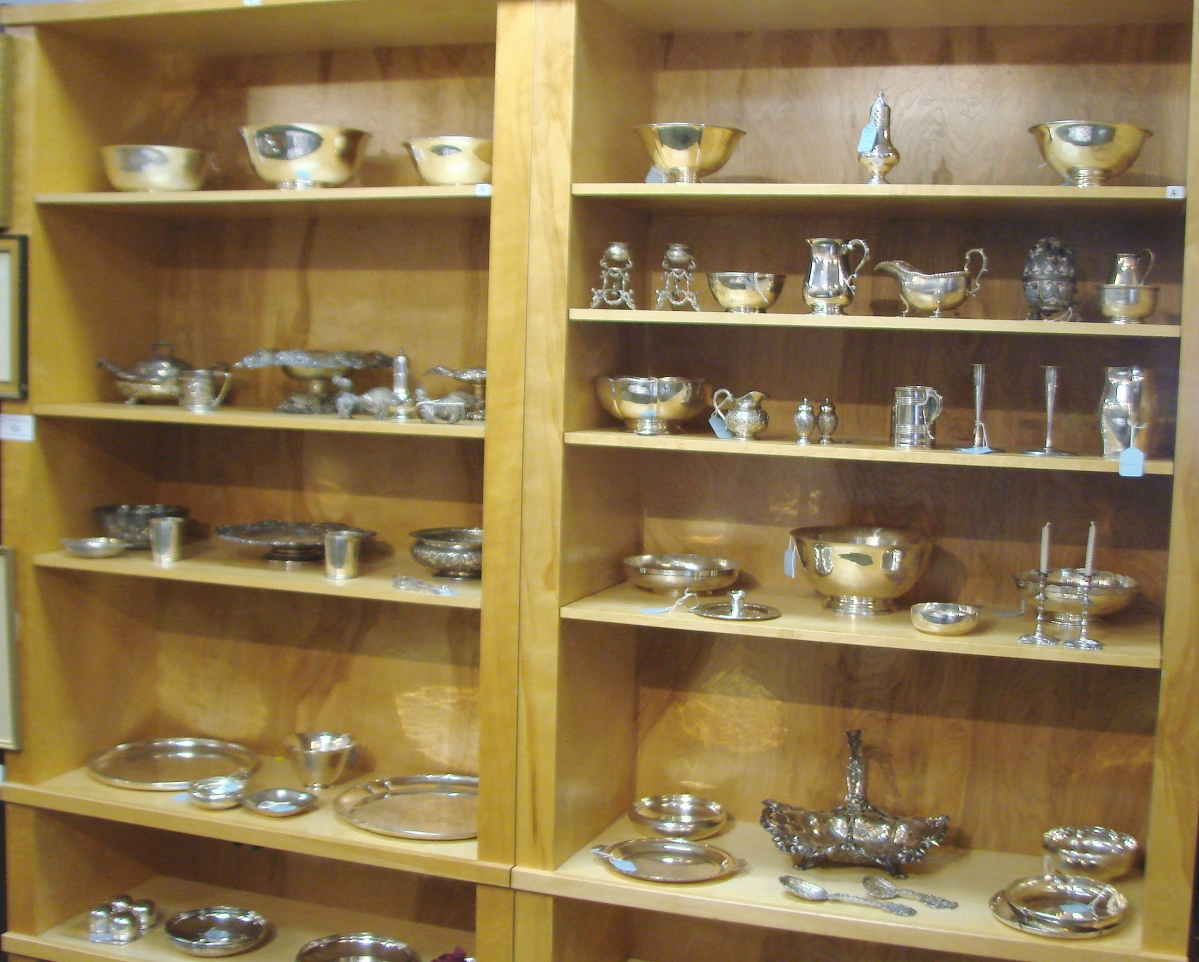 There were more than 225 lots of silver, ranging from early American through the Arts and Crafts periods. A small portion is pictured. 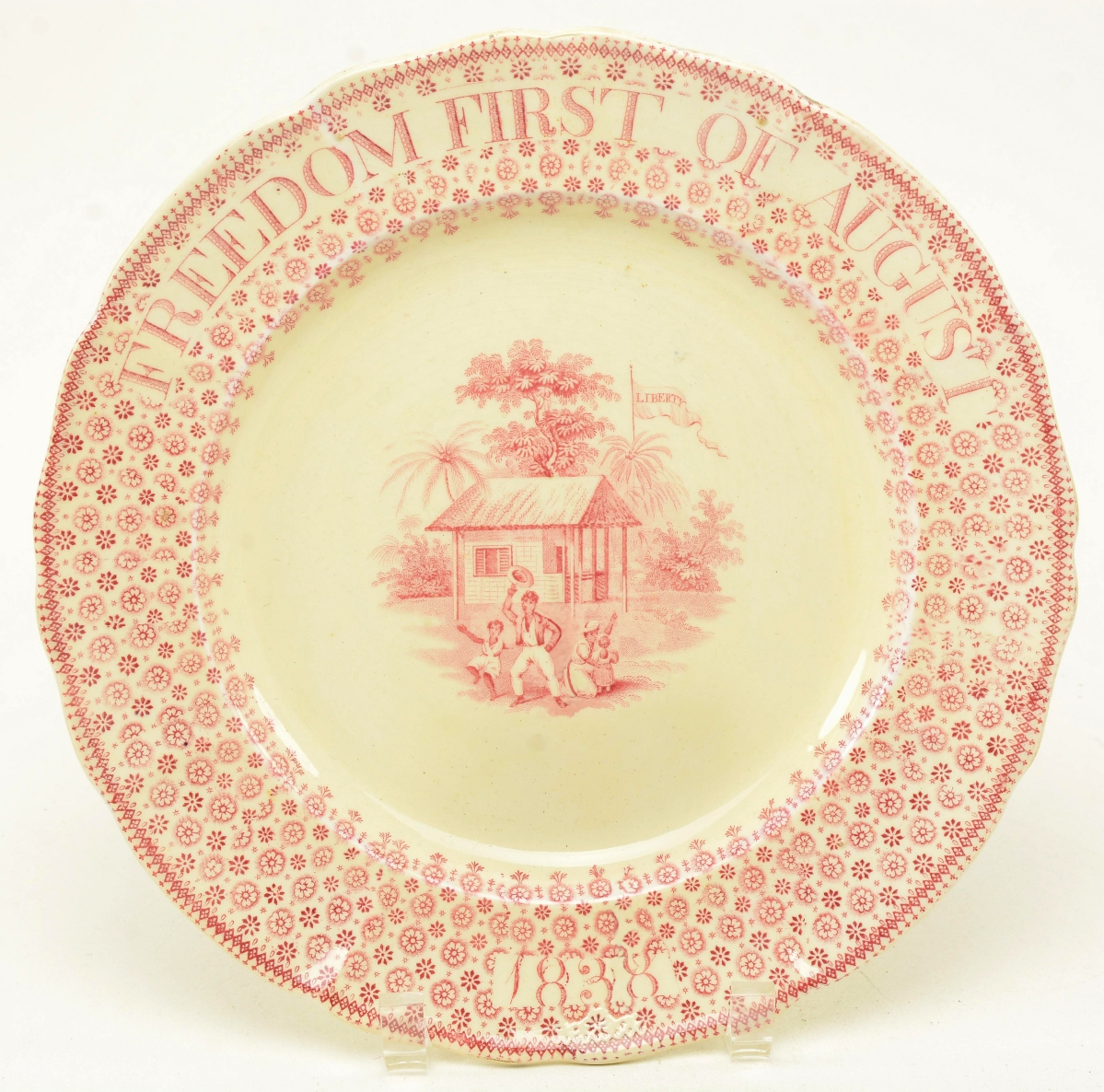 Celebrating the end of slavery in the British Empire, this 10¼-inch pink Staffordshire dinner plate depicted a joyous African American family in front of an idealized home. The motto in the border read “Freedom First of August 1838” and it sold for $833, nearly three times the estimate. 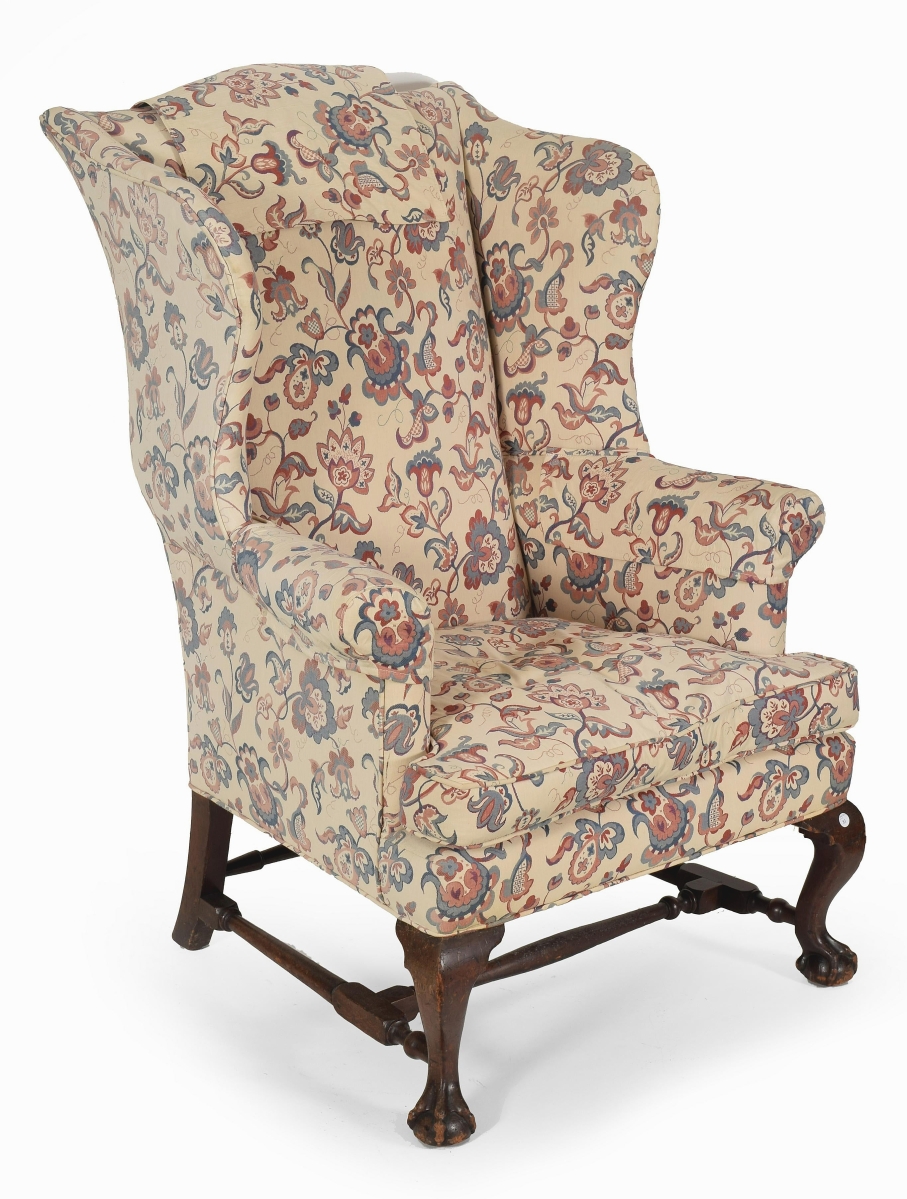 Realizing $5,950, this Chippendale mahogany wing chair, Boston, circa 1780, had an interesting history recorded on the underside of the stretchers. “Jonas C. March and Sally Wingate, married 1795 / Jonas Died in this Chair Rochester N.H.” 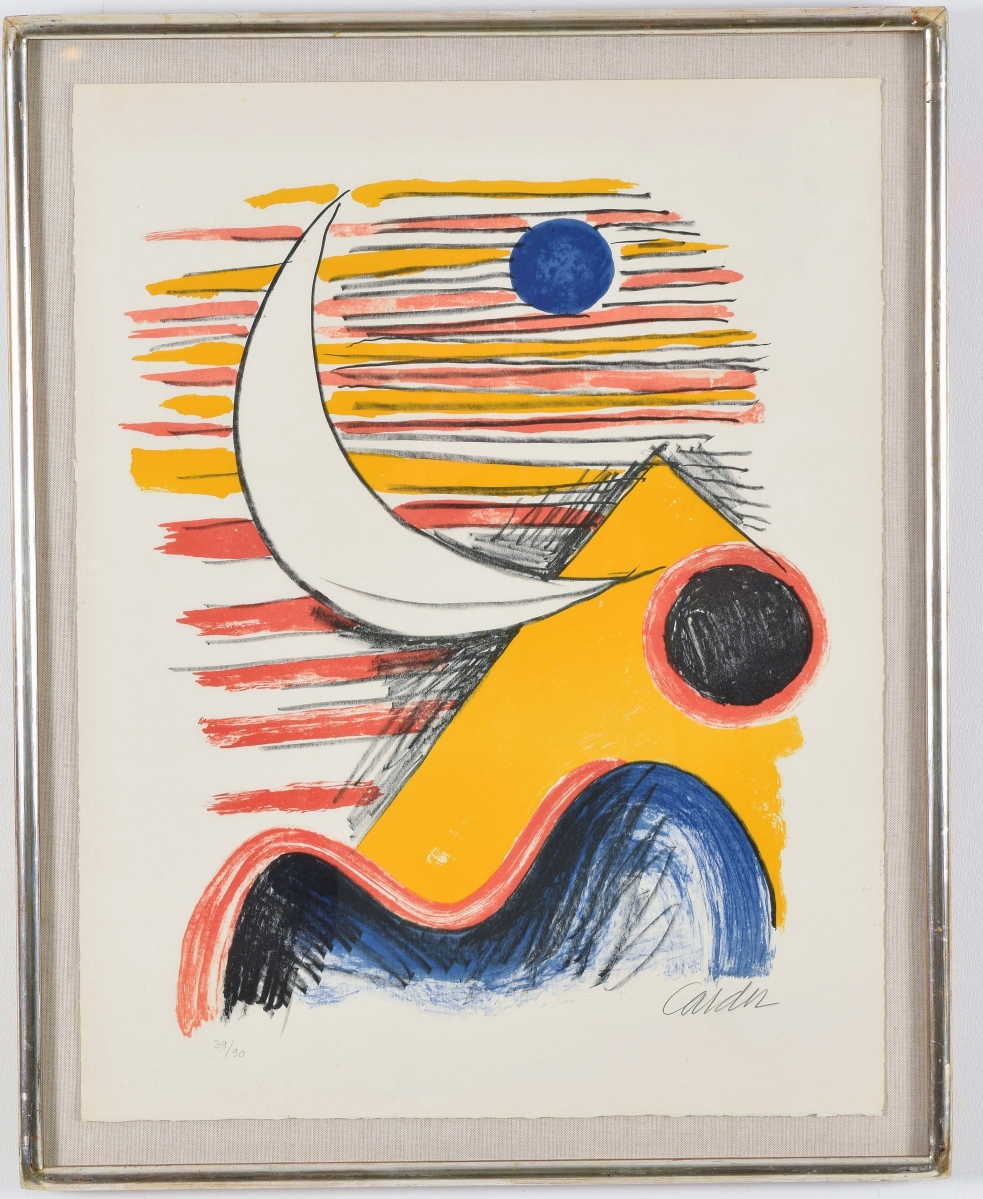 There were a number of lithographs by artists, including Miro, Calder and others. This Calder “Lune et Montagne,” signed and numbered 39/90, earned $1,785.

Tue Oct 6 , 2020
The Southwest Colorado Accelerator Program for Entrepreneurs, like many events around Durango, reinvented itself for 2020 to deal with restrictions required by the COVID-19 pandemic. Eight companies, some participating for the second time, were chosen to participate in the program that provides education, mentoring and financing for startup and young […]