One of a couple of deals closed by Joyce and Ron Bassin, A Bird in Hand Antiques, was this Grenfell Mission book cover of a wife and husband hunting. The entry for the piece noted that Grenfell book covers are hard to find but that this example “had it all.” […] 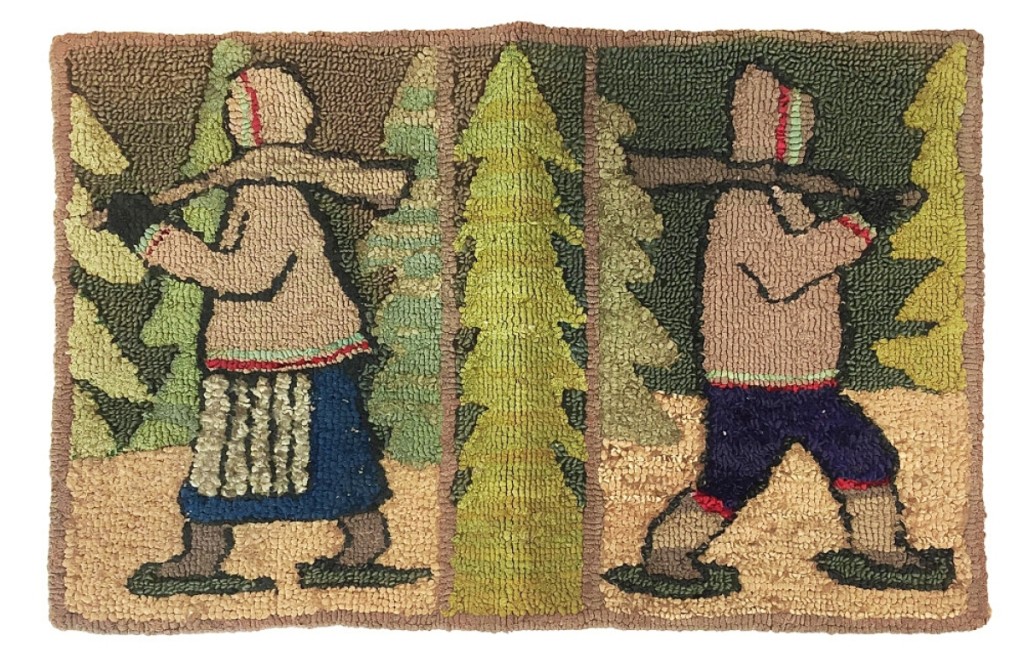 One of a couple of deals closed by Joyce and Ron Bassin, A Bird in Hand Antiques, was this Grenfell Mission book cover of a wife and husband hunting. The entry for the piece noted that Grenfell book covers are hard to find but that this example “had it all.” A Grenfell mat of a ship received the most page views in his booth but was still available after the show. Florham Park, N.J.

ONLINE – The Antique Dealers’ Association of America (ADA)’s Historic Deerfield Antiques Show took place online over Columbus Day Weekend. Opening at 10 am Friday, October 8 and closing at 10 pm on Monday, October 11, the show featured 29 exhibitors posting nearly 860 items. Within three hours of the show opening, more than 30 sales had been marked, a number that grew steadily through the run of the show.

Now in its second year as an online edition, the show continues the tradition that began in Springfield, Mass., in 1984 and moved to Historic Deerfield in 1998. Regardless of venue, it maintains a reputation as a venue for buying and selling top quality New England antiques and objects of Americana.

Steven S. Powers, president of the ADA, spoke to Antiques and The Arts Weekly the day after the show’s website went offline.

“I think it went well with the dealers we had participating. It was a smaller roster, which we anticipated; there seems to be some online show fatigue. We had a lot of dealers who have not been doing some of the in-person fall shows. Many people were happy we did the show, both dealers and customers, whether because they can’t travel, or they don’t live locally.”

Compared to the 2020 online edition, Powers said the two were “proportionally the same; the same number of sales, same number of visitors.” He noted a decrease in online shoppers, many of whom have started going to in-person shows if they can. 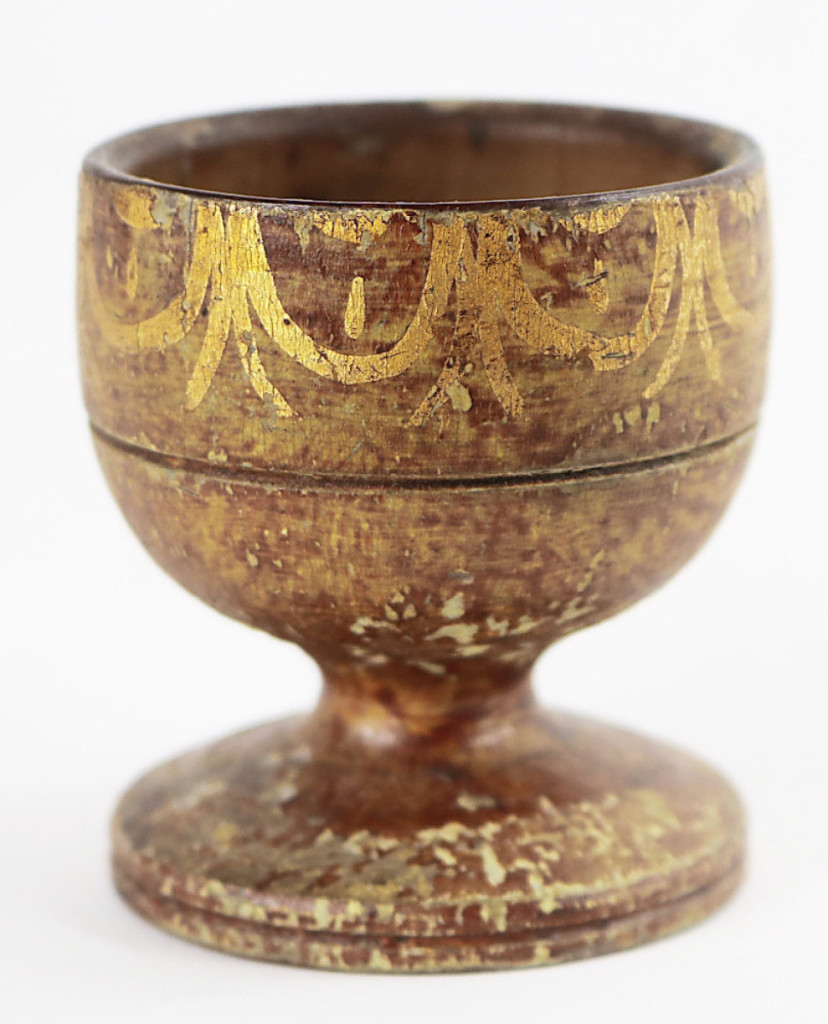 Paint-decorated treen master salts were popular with John Chaski, who had two examples for sale, both of which sold. This 2¼-inch example was thought to have been made in Ohio, early to mid-Nineteenth Century. Camden, Del.

Though Powers said he hadn’t yet had a chance to look at the sale stats, he said most dealers sold at least one thing. He himself sold two very good gameboards, both to the same buyer, who was a new client for him. Both pieces were more expensive than the other items in his booth, so he was happy.

The ADA makes an effort to engage new shoppers by utilizing Instagram as well as print advertising to capture those whose engagement on social media is nonexistent, infrequent or burgeoning.

Florham Park, N.J., dealer Ron Bassin, A Bird in Hand Antiques, sold two Grenfell Mission mats, both to existing customers. After the show closed, he said he fielded two inquiries on unsold items from people he’d never worked with before. He said he was “very pleased with the representation we got,” further commenting the show is still the easiest platform to use, one he finds fun to navigate. His navigating paid off and he said he bought from another dealer during the show.

“We had a very good show, sold two important samplers and several mid-priced pieces,” said Carol Huber. “Importantly, we talked to a lot of new people who called and inquired about specific pieces and things we had not listed. We were surprised at the interest and depth of many conversations.” The Old Saybrook, Conn., sampler dealer noted that one of the sales was a Newport, R.I., sampler worked by Rebeca Wilbor in 1773 at age 12. The silk on linen piece depicted a flowering vine three-sided border with several birds and animals, a house with a fenced lawn and figures flanking a bottom cartouche. Huber said it is going to a “major collection.”

Fellow sampler dealer Amy Finkel also made some sales, including one to an existing customer that had been worked in 1821 by Caroline Goulding of Hopkinton, Mass. The silk on linen cherry and maple framed piece depicted a two-chimney mustard colored house flanked by birds and trees below alphabets and a verse. 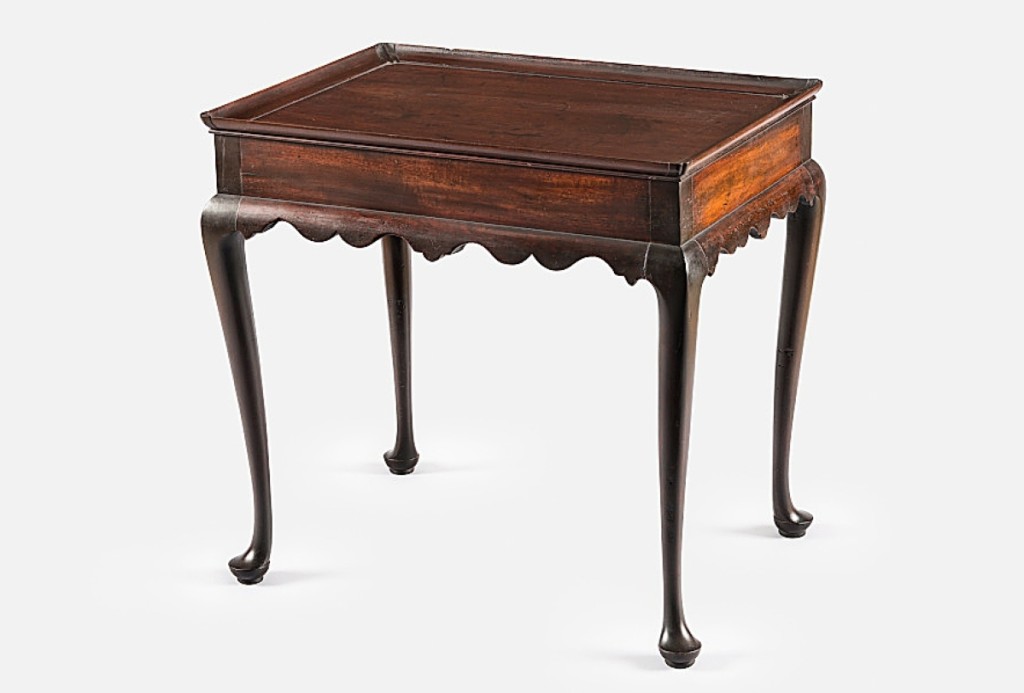 Lisa Minardi’s best sale was this Boston tray-top mahogany tea table with scalloped apron, delicate cabriole legs and pad feet; it had restorations to its rim. It was one of four sales amid numerous additional inquiries. Philip Bradley Antiques, Sumneytown, Penn.

Other dealers also sold textiles, which Grace Snyder observed seemed to be a strong category at the show. In addition to a pair of canvaswork needlework pictures, she and Elliott had four sales in total, including a brass pipe case, a tin sconce and a brass tankard. Two of the sales were made to trade buyers and two to private collectors, both of whom the South Egremont dealers had worked with previously.

A relatively new client for Olde Hope who lives in New England bought a blue and white pieced and quilted cotton crib quilt that the New Hope, Penn., and New York City dealers included with a small group of graphic quilts exhibited in New York City. It measured 40 by 40 inches and had a “Robbing Peter to Pay Paul” pattern with elaborate “feather” quilting. Edwin Hild said they made one other sale, to a new client in Houston. “We were happy to make the sales and had a fair number of inquiries. The show also took people to our website.”

Paul Vandekar, Earle D. Vandekar of Knightsbridge, also made sales by people going to his website in addition to a good Delft fuddling cup from his show booth.

Aarne Anton, Nexus Singularity, sold several things, including an airplane flight gameboard, cast iron figures of a caryatid and an African American bust, an Odd Fellows lodge banner, a queen bee box and a whirligig of a man in a top hat. The Pomona, N.Y., dealer noted he “looks forward to the ADA Online Show as so many of us are finding art and antiques online with limited traveling and greater reach. Most of my posted offerings were sized for easy shipping.”

Lisa Minardi, Philip H. Bradley Antiques, had four sales during the show, to both old and new customers, as well as inquiries on many other things. “The highlight of our sales was the Boston tray-top mahogany tea table, which had a beautiful, scalloped skirt and great proportions. I had multiple customers inquire about that piece before I could get back to my computer to mark it sold. I also sold a very nice Philadelphia sackback Windsor armchair, a rare youth-size painted Windsor and a stretcher-base tavern table.”

“We had a nice show,” said Ted Fuehr, American Spirit Antiques. He noted inquiries from 17 attendees and four sales: a piece of mochaware, an Art Deco screen, a yellowware bowl and a weathervane. An inquiry about an item he had previously offered at another show that was unsold resulted in a total of five sales for the weekend. 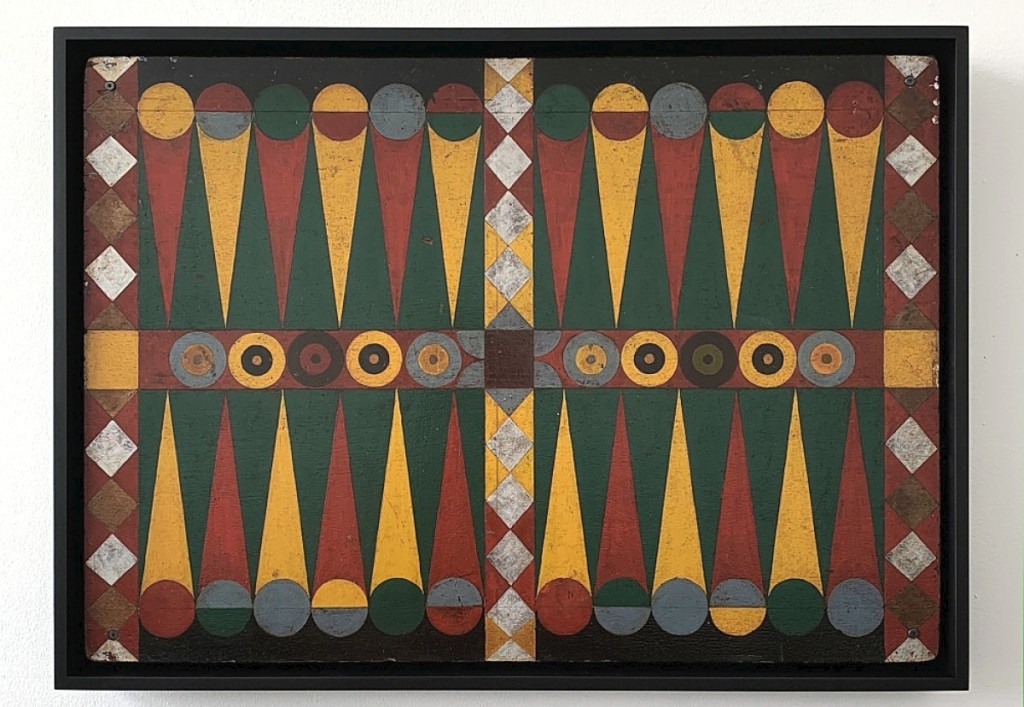 Steven S. Powers said he had never seen a better example than this backgammon gameboard, which was one of two gameboards he sold at the show, both to the same buyer. Brooklyn, N.Y.

Litchfield, Conn., dealer Jeffrey Tillou has been doing enough online shows that he has the process down to a science. “I was happy to participate, we have it fairly streamlined so it doesn’t take much effort and the costs are minimal.” He reported three or four small sales during the show.

Bernadette and Christopher Evans transacted sales on items in several different categories. A stoneware jar with cobalt decoration of a duck was one of the first sales; it was followed by sales of a painted double-handled basket, a pair of turned painted finials and a hooked rug with a landscape.

Painted smalls were good sellers with Sheridan Loyd, who sold an early blue firkin discovered in Maine, an early blueberry crate and an early turned and painted compote. A Nineteenth Century sand painting was another successful transaction made by the St Joseph, Mo., dealer.

Judith Livingston Loto made sales throughout the show, beginning with a circa 1968 issue of Robert Bourdon’s Early American Wrought Iron, which sold within a few hours of the opening. By the time the show wrapped, she had also found buyers for Paintings by New England Provincial Artists, 1775-1800 by Nina Fletcher Little, Edouard Stackpole’s Scrimshaw at Mystic Seaport and The Sketchbooks of John Samuel Blunt, published in 2007 by Deborah Child.

The ADA does not currently have another online show on the calendar, but Steven Powers said if they do another it might take place in spring 2022. For information, www.adadealers.com.

Wed Oct 20 , 2021
OLMSTED FALLS, Ohio (WJW) — A spooktacular idea is emerging from an Olmsted Falls home.  “My home became sort of a breakout of a giant skeleton that’s trying to escape,” said Alan Perkins. He spent 45 days executing his vision, showing us the skeletal details of his plastic foam and […] 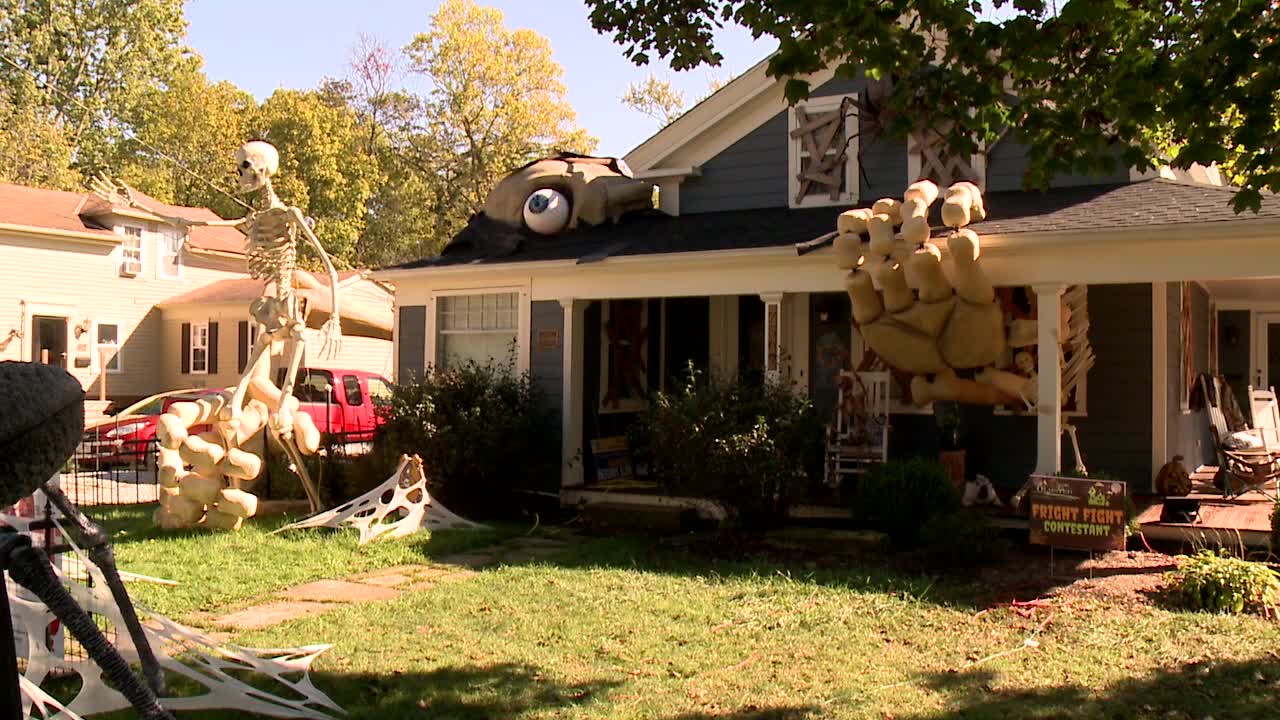