By JANET STEINBERGSpecial to the Journal & Topics Headstones, not stars and crosses, line Arlington National Cemetery. (Photos by Janet Steinberg) Around the end of May, if an elderly friend or relative asks what you are doing for Decoration Day, don’t be alarmed…it is not a sign of early onset […]

By JANET STEINBERG
Special to the Journal & Topics 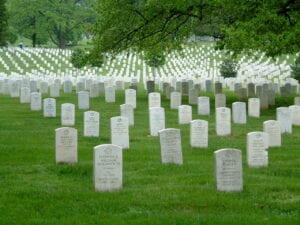 Around the end of May, if an elderly friend or relative asks what you are doing for Decoration Day, don’t be alarmed…it is not a sign of early onset dementia. In the years following the Civil War, Memorial Day was known as Decoration Day after General James Garfield made a speech at Arlington National Cemetery, and 5,000 participants decorated the graves of the 20,000 Civil War soldiers buried there. In 1971, an act of Congress declared the day be named Memorial Day, a national holiday honoring the heroic men and women who died while serving in the U.S. military.

Heroes come in all shapes and sizes…all colors…all genders…all religions and all professions.  They may appear at any time during a given year, or once in a lifetime. However, every year at the end of May, one group of heroes consistently etches a place in our hearts and souls.   These are the courageous men and women who served to protect our nation…some making the ultimate sacrifice. Join me in honoring these American heroes interred at home and abroad.

THE AMERICAN CEMETERY, located in Colleville-sur-Mer, France, on a bluff overlooking Omaha Beach, contains the remains of 9,387 American servicemen. The majority of the nearly 10,000 American soldiers killed at Omaha Beach are buried in this 170-acre cemetery on land given to the United States by France as a token of her gratitude. Here, among those buried in the cemetery are some Army Air Corps crewmen shot down over France as early as 1942, three American women, and the graves of two sons of President Theodore Roosevelt.

A semicircular memorial contains the Tablets of the Missing, on which are inscribed 1,557 names of the men whose bodies were never recovered. A map outlines the battle sites of the Normandy beaches. In the center of the memorial, a 22-ft. bronze “ soars skyward.

An American man was selected to lay a wreath at the base of the memorial. Taps was played over the loudspeaker, and hundreds of visitors from all over the world stood with hand over heart as the Americans sang the Star Spangled Banner. Visitors stopped at gravesites of soldiers they had never met and offered prayers to memorialize the sacrifice that these young soldiers had made.

The five beaches that make up Normandy Beach on the austere northern coast of France are the sites where the members of “The Greatest Generation” landed on June 6, 1944. Troops from the United States landed on Omaha and Utah beaches; Great Britain’s troops landed on Gold and Sword beaches; and Canadian troops landed on Juno Beach. The men who landed at Normandy on D-Day made up the largest military invasion from the sea in the history of the world. The code name for the landing was “Operation Neptune”. 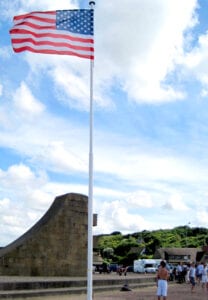 The heavily defended Omaha Beach, surrounded by steep cliffs, was the scene of the bloodiest of the D-Day landings. Soaring upward in the center of Omaha Beach is Les Braves (The Braves), a 3-element sculpture that pays tribute to the American soldiers who lost their lives on Omaha Beach. This shining memorial, by French sculptor Anilore Banon, consists of The Wings of Hope, Rise, Freedom! and The Wings of Fraternity.

One of the most chilling, yet most thrilling, encounters I’ve had in my travels was when a strange man approached my husband on Omaha Beach and asked him if he had served in WWII. My husband, who was an 18-year-old sailor at the time, replied in the affirmative. The stranger then said his teenage son would like to know if he could shake my husband’s hand and speak with him. Somebody did something right, to raise a kid like that!

Gold Beach, approximately 15 miles from Omaha beach in the small seaside town of Arromanches, is where the British 50th Infantry Division landed.

From the beaches at Arromanches you can see the remains of Mulberry Harbour, where the Royal Engineers had built 10 miles of floating roadways to land men and vehicles on the beach.

The Arromanches Invasion Museum, dedicated to the largest landing operation in history, shows films and displays models that re-create the entire operation along the D-Day beaches.

ARLINGTON NATIONAL CEMETERY, our nation’s most hallowed ground and the country’s largest military cemetery, is located across the Potomac River from Washington, D.C. The 639 acres of this military cemetery controlled by the U.S. Department of the Army is where the dead of the nation’s conflicts have been buried since the Civil War.

Unlike the American Cemetery in France, which only has the remains of servicemen killed during the invasion of Normandy and ensuing military operations in WWll, Arlington serves as the final resting place for more than 400,000 military veterans and their immediate family from the fronts of Iraq and Afghanistan, as well as World Wars I and II, the Korean conflict, Vietnam, the Cold War and America’s Civil War. 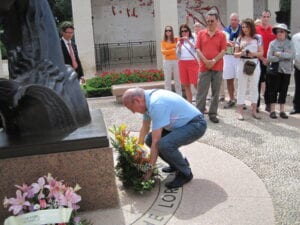 American lays a wreath at the base of the memorial in France.

The remains of an unidentified WWI American soldier was entombed on Armistice Day, November 11, 1921. In 1931, it was covered by a more elaborate marble sarcophagus. The tomb was completed at a cost of $48,000 and opened to the public on April 9, 1932. The U.S. Army has perpetually guarded the Tomb of the Unknown Soldier since July 2, 1937. The 3rd U.S. Infantry Regiment (“The Old Guard”), that began guarding the Tomb on April 6, 1948, follows a meticulous routine when watching over the graves.

Another of the most frequently visited sites in the cemetery is the grave of President John F. Kennedy and Jacqueline Kennedy Onassis who are buried along with their son Patrick and their stillborn daughter Arabella. Kennedy’s remains were interred there on March 14, 1967, after removal from his original November 1963 burial site, some 20 feet away.

The presidential grave is marked with an eternal flame that was requested by Kennedy’s widow Jacqueline. The nearby graves of his brothers, Senator Robert F. Kennedy and Senator Edward M. “Ted” Kennedy are marked with simple crosses and footstones.

As you wander through these hallowed grounds, it will become quite clear that Former President Barack Obama said it best: “Our nation owes a debt to its fallen heroes that we can never fully repay.”

Support local news by subscribing to the Journal & Topics in print or online.

Wed May 26 , 2021
Join Zebra as we talk about how retail is moving ahead to handle buyer calls for by way of technology. Food safety is a prime concern for meals and beverage business decision-makers and shoppers. See how you can future-proof your small business and achieve a competitive advantage by embracing the […]